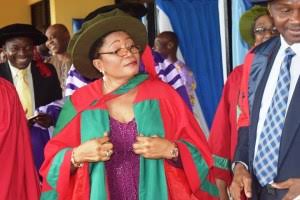 Exactly 34 years after the University of Benin got the first female Vice-Chancellor in the history of Nigerian tertiary education, another female vice-chancellor has been appointed to run the affairs of the university.

Prof.  Lillian Salami was confirmed the Vice-Chancellor of UNIBEN on Saturday and she is the first alumnus of the institution to hold the position.

The state Governor, Godwin Obaseki, has already congratulated Prof. Salami who hails from Edo State and was born in Jos, Plateau State, on August 8, 1956.

She was appointed Senior Lecturer in UNIBEN in 1994 and rose to the rank of a professor in 2005.

Governor Obaseki said in a statement that he was confident that the new vice-chancellor would deploy her wealth of experience in lifting the fortunes of the great citadel of learning and described her emergence as another great milestone in the history of the university.