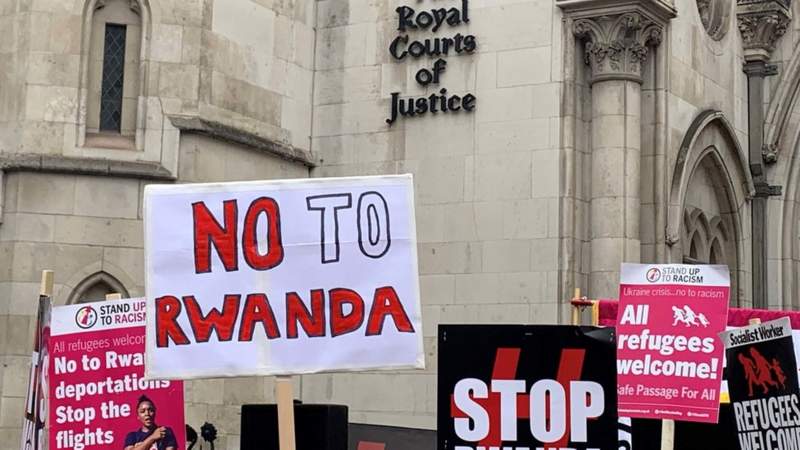 The government has clear legal powers to send migrants to Rwanda under its controversial relocation scheme, its lawyers have told the High Court.On the third day of a legal challenge against the policy, lawyers for the Home Secretary argued concerns from the United Nations were misplaced.The plan to fly migrants to Rwanda is on hold until the outcome of the case.

Liz Truss and her new Home Secretary, Suella Braverman, support the plan begun by Priti Patel and Boris Johnson.The government is facing a highly unusual five-day legal challenge to the policy involving at least 10 migrants, campaign groups Care4Calais and Detention Action, and the Public and Commercial Services Union, which represents the vast majority of UK Border Force staff.ADVERTISEMENTWhat is the UK’s plan to send asylum seekers to Rwanda?Ministers warned about Rwanda rights, court toldThe claimants argue the home secretary has no legal right to send migrants to Rwanda and, furthermore, deciding the country is safe was irrational.

Evidence already aired in court has included warnings from a handpicked government adviser that the African country’s regime has murdered political opponents.But opening the government’s defence of the policy, Lord David Pannick QC said it was clear the home secretary could send migrants to another country provided she could show it was safe under a law dating back to Tony Blair’s Labour government.

That 2004 legislation gave ministers the power to identify “safe third countries” and to relocate asylum seekers there, rather than handle their claims for refuge in the UK.The law could only be used if the government was sure migrants would not be sent on to another more dangerous country – and Lord Pannick said the government had obtained those assurances.”There is no other criteria stated by Parliament,” said Lord Pannick.”It is not for the court to insert more criteria so as to limit the [home secretary’s powers].”The [international law] obligation on the UK is to either assess the claim or return the asylum seeker to a safe third country,” said Lord Pannick.”If we choose to return the individual to a third country that is safe, then we, the UK, have complied with our obligations under the Refugee Convention.”On Tuesday, the court heard the UN’s Refugee Agency believes Rwanda has neither the capacity nor the expertise to deal with the numbers that could be sent.

Furthermore, it warned the government of Rwanda may not abide by the agreement it had struck with the UK.But government lawyers said documents from the Rwandan government showed it has given point-by-point assurances that all migrants will be fairly treated.”The home secretary has received detailed assurances from the government of Rwanda regarding both the processing of relocated individuals’ asylum claims and the reception and ongoing treatment of relocated individuals,” said written submissions.”The court can and should place great weight on those assurances. Rwanda is a signatory to both the Refugee Convention and the UN Convention Against Torture and a key Commonwealth partner of the UK.”The case continues until Friday – with a second stage expected to take place in October.