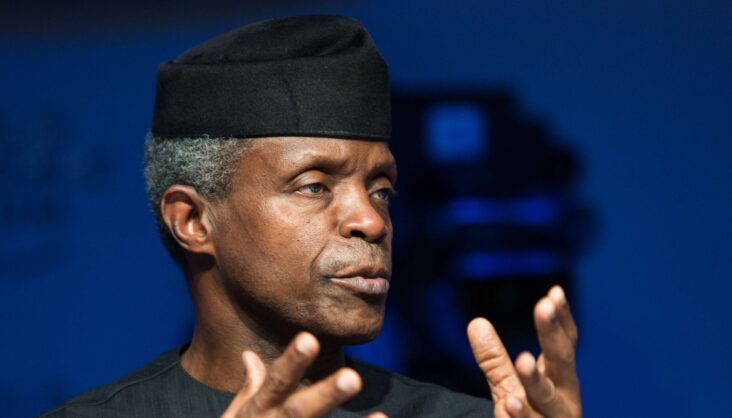 Shubham Chaudhuri, the Nigeria country director for the World Bank says the financial institution plans “to commit over $1.5bn towards the energy transition plan on renewable energy, on power sector reforms, on clean cooking, and wherever opportunities arise.”

A contribution from the US Exim Bank will double this amount to $3bn.

What does the plan aim at?

Osinbajo believes that “for Africa, the problem of energy poverty is as important as our climate ambitions. Energy use is crucial for almost every conceivable aspect of development. Wealth, health, nutrition, water, infrastructure, education, and life expectancy are significantly related to the consumption of energy per capita.”

Global powers have been calling for Africa to decarbonise but, as environment minister Mohammed Abdullahi stated: “As a continent, we must reject proscriptive one-size fits all solutions.”

He added that any plan to decarbonise Nigeria without first giving the whole nation electricity access would be “unjust and unacceptable.”

The plan aims first at giving all citizens access to power, to be realised by 2030. This comes at a time when there have been various blackouts in the country, and businesses have been suffering due to power issues.

Is $410bn a realistic request?

According to Osinbajo: “The average $3bn per year investments in renewable energy recorded for the whole of Africa between 2000 and 2020 will certainly not suffice.”

Although $410bn is a large sum, it would be spread out over a long period of time. The vice president explained that: “We have an inter-ministerial energy transition implementation working group, which I chair. We are currently engaging with partners to secure an initial $10bn support package ahead of COP27 along the lines of the South African Just Energy Transition Partnership announced at COP26 in Glasgow.”

At COP26 in November 2021, the governments of South Africa, France, Germany the UK, the US, as well as the EU, launched an ambitious long-term Just Energy Transition Partnership (JETP) to support the southern African country’s decarbonisation efforts in order to move its economy towards more reliance on renewable energy resources.

The launch of Nigeria’s Energy Transition Plan just ahead of COP27 is a good time for discussions about financing.

One energy expert based in Lagos tells The Africa Report that “$410bn is not a ridiculous amount. Large capital projects run into hundreds of millions for individual energy companies, so for a whole nation, it doesn’t sound farfetched.” However, he believes that receiving $10bn “every year might need to be taken with a pinch of salt.”