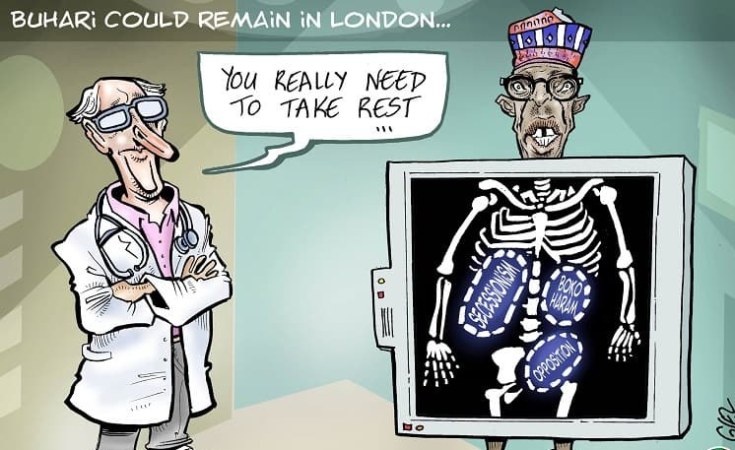 The president, he said, should use the State House Clinic which is situated at the Presidential Villa, Abuja.

He said this on Thursday when the State House Permanent Secretary, Tijani Umar, appeared before the Senate Committee on Federal Character and Intergovernmental Affairs for the State House’ 2021 budget defence.

Mr Umar had presented the 2021 budget estimate of N19.7 billion. Of the estimate, N1.3 billion was allocated to the State House Clinic.

In his reaction to the proposed budget, Mr La’ah said stopping the president and other presidential officials from travelling abroad for medical treatment will help ensure that the clinic becomes more functional and effective.

He said the committee would approve the budget for the State House Clinic but insisted that Mr Buhari and other officials should stop travelling abroad for medical treatment.

“Our president is not a man to be taken out anytime or anything that happens to him on sickness matter. He must attend our clinic here and we must make sure that we equip our hospital to the best of our ability so that any emergency will be first taken care of here before flying out if the need arises.

“It is already approved, N1.3 billion for State House Clinic. I want this thing done and I want the credit to go to the whole committee – leave a legacy for the State House, that the clinic we requested was done within the shortest time.”

He also said oversight will be done monthly, if all that is needed is provided, two years will be given to the State House for completion of the clinic.

Speaking with journalists, Mr Umar said necessary arrangements will be put in place to meet the medical needs of the president and other top officials once the budget was approved.

“Today we had the privilege of appearing before this senate committee. It is not correct to say the state house clinic is in comatose. It is not. We have realigned some many things and one of the fundamental challenges we have dealt with is the sustainable supply of drugs and consumables. Don’t forget that this is derived from the budget.

“We have appealed to the committee to assist us with the presidential wing of the state house clinic.

“The N1.3 billion is absolutely inadequate when you juxtapose the amount proposed and the labour – the status of the principals that that project is going to serve and you compare with worldwide standards you see that it is not anything near what we need.”

The current warning from the panel comes amidst criticisms of the president for his consistent medical trips.

The president has had several medical trips between 2015 and 2019. One of his trips in 2017, he spent 103 days in London with the Vice President, Yemi Osinbajo, acting as the president then.

His long absence sparked rumours that he had passed on – speculations which were denied by the presidency.

The World Health Organisation had ranked Nigeria 187 out of 191 countries in its ranking of the world’s health systems. with other neighbouring countries such as Ghana, Togo, Niger, Mali, and Chad ranking better than Nigeria in health care delivery.