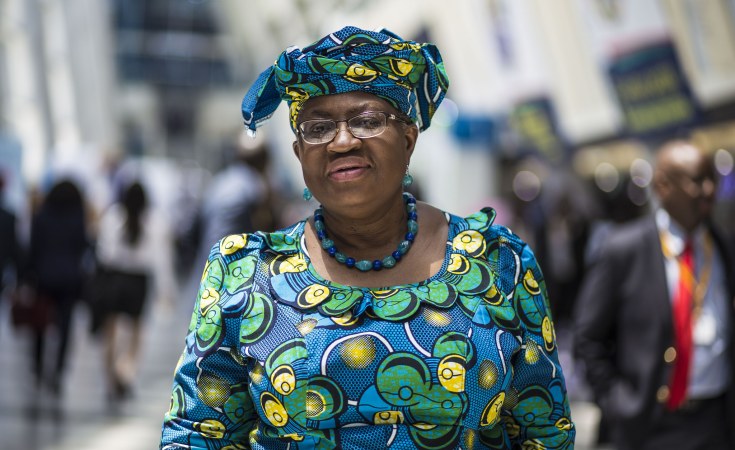 By Kingsley Moghalu and Toyin Saraki

The selection process for the leadership of the World Trade Organization in Geneva is down to two finalists. Both are women – Ngozi Okonjo-Iweala, Nigeria’s former minister of finance, economy and foreign affairs, and Yoo Myung-hee, the first woman to serve as South Korea’s minister of trade.

Okonjo-Iweala, Africa’s candidate, is the better woman to revive the WTO. The institution has been weakened by great-power rivalry between the United States and China, a political assault on globalization that has been heightened by the Covid-19 global health pandemic. It also has faced increasing institutional irrelevance in recent years, as countries have tilted toward bilateral and regional trade deals following a breakdown in global trade negotiations.

Given its current funk, what the WTO needs now is not another trade bureaucrat, but a political leader with strong economic and development credentials who understands trade. The organization should be led at this time by a woman with the gravitas to rebuild its confidence and shepherd institutional reforms, broker a rapprochement between America and China, and who has a firm grasp of the universe of development, of which global trade is a core aspect.

Okonjo-Iweala has led effective reform of national and international organizations.

Okonjo-Iweala is ideal on all these counts. She has led national and international institutions with a track record of strong results. During two terms as Nigeria’s finance and economy minister, under two presidents, and as a managing director of the World Bank, Okonjo-Iweala led economic reforms that restored macroeconomic stability to Africa’s largest economy; improved regional trade flows in West Africa; and increased output and productivity of the coffee sector of Cote d’Ivoire in global trade.

The former Nigerian minister is a powerfully networked global development leader, well placed to bridge divides and build consensus at the WTO. She has served on numerous global development commissions with former heads of government. Her rolodex from close working relationships with world leaders will help her restore respect, attention and engagement with the world trade body.

A development economist educated at Harvard and the Massachusetts Institute of Technology, Okonjo-Iweala combines her global leadership credentials with a keen sense of the unique role of world trade in development, and the importance of world trade not just for Africa — the world’s last development frontier — but as well for Asian and other emerging market countries whose economies she worked on at the World Bank. As the contender told David Dollar of the Brookings Institution, “trade is an essential part of the arsenal of tools…with which a country approaches development”.

Dr Iweala understands the linkages of broad-based human development that determine the ability of citizens in developing countries to participate effectively in world trade. As Nigeria’s finance minister, she promoted immunisation programs for children and empowered women who were engaged in small and medium scale businesses, including exporters. She initiated and digitalized Nigeria’s Conditional Cash Transfer Scheme, ensuring that women received conditional cash transfers of approximately $10 upon their attendance of health facilities for prenatal care and immunisation for their children. Integrated into the Saving One Million Lives programme, the conditional cash transfer mechanism affected the lives of more than 400,000 women and children.

In the northern Nigerian state of Kano, working with the United Kingdom Department for International Development, Nigeria further piloted a conditional cash transfer scheme for poor households that is linked to girls’ enrolment in school. This incentive increased attendance by 40 percent.

Recognizing that women are responsible for 70 percent of Africa’s food production and manage a large proportion of small enterprises, Okonjo-Iweala enrolled three million women into an e-wallet programme in the agricultural sector, providing them with mobile phones so that they could receive subsidised seeds, fertilisers and pesticides.

WTO’s leader should understand the inequities that have left Africa largely out of global trade.

With a miniscule two percent of global trade exports, Africa has essentially been left behind in world trade. The Doha Development Round of trade negotiations, which were aimed at addressing issues of agricultural access to developed-country markets and at reducing other inequities in a global trading system that is skewed against developing countries, have broken down. Okonjo-Iweala would bring to WTO a firm knowledge of this gap – an opportunity for the expansion of inclusive global prosperity, as well as a will to build consensus around reviving the Doha negotiations.

Moreover, there is a need for equity in the distribution of leadership roles in international economic governance. No African has ever headed the world trade body. The World Bank and the International Monetary Fund have been headed by Americans and Europeans respectively since the establishment of the Bretton Woods system over 70 years ago. The WTO was initially conceived as the third leg of the Bretton Woods system (the International Trade Organization) but could not be established at the time owing to domestic political opposition in the United States. The time has come for a well-qualified African to lead it.

African leaders must call in all their relationships and partnerships with the United States, Europe and China to ensure Okonjo-Iweala’s selection to lead the WTO. The case and the candidate — for Africa and the world — are a strong match.

Kingsley Moghalu, a former deputy governor of the Central Bank of Nigeria, is a distinguished nonresident fellow at The Fletcher School of Law and Diplomacy at Tufts University,where he was a professor of public policy. Toyin Saraki is a global health advocate, healthcare philanthropist, and the Founder-President of Wellbeing Foundation Africa.