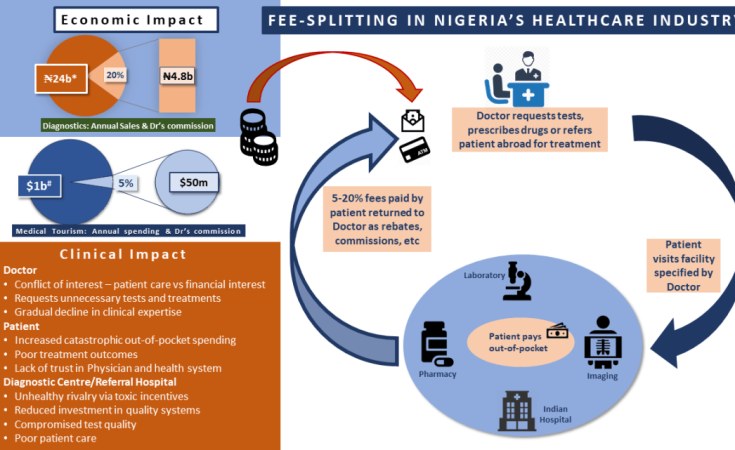 Some Nigerians recount how they or their loved ones fell prey to medical referral kickback scam of doctors and diagnostic centres.

On Monday, PREMIUM TIMES published a 20-month investigation revealing the rotten underbelly of the Nigerian healthcare system where doctors, hospitals and medical laboratory service providers connive to defraud patients of billions of naira annually through a referral kickback scam.

This kickback scam involves the payment of between 10 to 20 per cent cut to doctors and hospitals by diagnostic centres for every referral made to them. The practice violates extant regulations that protect patients from exploitation.

Posing as a doctor, a PREMIUM TIMES’ journalist for 20 months was able to refer several people for routine medical tests to some of the leading diagnostics centres in the country and the reporter’s bank account was credited with kickbacks.

After our story was published on Monday, some Nigerians recounted how they fell victim to this scam:

“I have three children, two of them were born in Nigeria and one in the US. The two of them that were born in Nigeria had unpleasant experiences with doctors. The second one is not within the scope of what you are looking at. But the first one, that was eight years ago precisely, my wife was attending Roding Medical Centre in Victoria Island. She was being seen by one Dr Nwokeoma and just close to when she was due – I think by their estimation it was two or three weeks away, she went for her routine test with the doctor and the doctor said the child was not well-positioned and that it is a cause for concern. He asked us to do a TC scan at Union Diagnostics.

“When we were driving out, my wife was a bit curious, she was like there was this lab that is just on Ligali Ayorunde, close to Roding and the Eti-Osa Local government office. My wife was like why are we going all the way to the other part of VI when there is a lab just here. So, we got into the lab and requested a CT scan, and the lady that was supposed to do the CT scan went ballistic. She was saying all sorts of things. She was saying: ‘We want to put her in trouble. This woman is almost nine months pregnant and they want to do a CT scan, for what?

“In the middle of all of this, I forgot I could call my brother-in-law, who is a gynaecologist in the UK to even speak to him about it.

“The lady refused to do the scan anyway. She said it was going to endanger the baby. We got in the car and were going to go to Union Diagnostics. But my brother-in-law called. I narrated what happened to him and he was like ‘a CT scan, for what?’

“My brother-in-law said he had not seen anything in his practice that will make him send a woman to do a CT scan for what I have just described, except I was describing something else. He said that it was something he could feel with his hands and if he could feel it, he could tell what position the baby was and since the child was three weeks away, things could change very quickly, i.e. the child could get into the right position. So, why would he ask us to go to a CT scan? He said I should not do it (the CT scan). He promised to call Roding and have a word with the owner of Roding.

“So, he called the owner of Roding and asked him why Dr Nwokeoma would do such a thing and asked the owner to examine my wife himself. He called us back and said well, different doctors have different exposure, maybe he would have done it differently and not that what Dr. Nwokeoma did was wrong. I just felt this was a nice way of saying this guy should not have asked us to go for the CT scan.

“So, putting all these together, I just realised that the fact that he specified that we should go to that Union Diagnostics is a scam. They would have done the test and because it is something they have all planned together, he would have received a cut from the fee. The luck we had was that we went to the other lab, Radmed, where the lab technician refused to do the test.”

“I was involved in an accident in 2016 en route Lagos. The accident was a ghastly one and I had to be rushed to the nearest hospital to the accident scene.

“I spent two days there to regain consciousness and stamina to travel down to Lagos for better medical attention. Doctors at the hospital where I was rushed to confirmed that I had an injury on my left knee and ankle.

“They confirmed that it was not a bone fracture and advised that I seek further medical attention and also do a scan. On getting to Lagos I went to my hospital and the doctor who attended to me confirmed the same thing and asked that I do a CT scan to know the extent of the damage.

“I went for the CT scan (my knee and ankle) and the radiologist on duty interpreted the scan result and his interpretation conformed with what the doctor had suspected.

“However, when I submitted the report to the present doctor, he asked that I visit a particular scan centre in Surulere to get interpretation because what the radiologist stated in my report was not the same as his submission. He thought I did not understand the medical terms used. Unknown to him, I had gotten clarification with my family doctor.

“I was in pain and needed to start medication immediately. So, I had to do what he asked. This cost was like N20,000.00 extra.

“And eventually, the interpretation came, and it was the same thing my family doctor interpreted from the radiologist report (I didn’t send the scans to him. I only sent the result so he can explain the medical terms).

“My wife and I used Immanuel General Hospital, Eket for her delivery. We had the prenatal care there. At one time, about the third trimester, the medical practitioner that attended to us recommended a Scan. Of course, he specified the place at Eket. We searched for and eventually found the place. We went in and told them what we came for.

“At first, I wondered why she would write down his name along with my wife’s details. I didn’t want to dig deep. The subsequent time we visited was not on any expert’s recommendation, we just needed to know how the baby was doing. It was then we confirmed our suspicion, as the lady that attended to us demanded to write the name of the doctor that recommended the centre to be written down. I looked into that logbook this time around (again) as she wrote down a name.

“Of course, this is Nigeria and I can afford it. The Ucheji (the diagnostic centre) must survive as well as the Ucheji “referee”. My wife and I reasoned that there must be some form of “thank you” from Ucheji to those names I saw.

Abdullahi described how his sister who was recently delivered of a child was made to do multiple scans until a nurse she knew who worked at the hospital told her why she was being asked to do the same test multiple times.

“The hospital is a Primary Healthcare Center (PHC) at Barnawa, Kaduna State.

“She had done two scans and was going for the third scan when she met a nurse, who lives in the same neighbourhood as her. Each scan cost N2,500, a total of N5,000. She wondered why because when she did the second scan and brought the result, the hospital did not say anything, which suggested that everything was fine.

“One of the nurses who work there lives in the same neighbourhood as my sister. She told my sister that the phone number on the referral letter was to facilitate the kickback. My sister decided not to go for the third because it was obvious the scan was not necessary. She did not bother confronting the health centre.”

“It was at FMC, Oyingbo. Early this year, my mum had a stroke relapse. She was to do an MRI scan at one diagnostic centre in Surulere, Lagos. I thought this was normal until the doctor requested that I should let the scan centre executive know he referred us. And of course, the scan centre also asked whether we were referred by a doctor.

“The same scheming scenario recurred when we were to run another one to assess if she was getting better. They know you’re in one hospital, they know the doctor who could have referred you.”