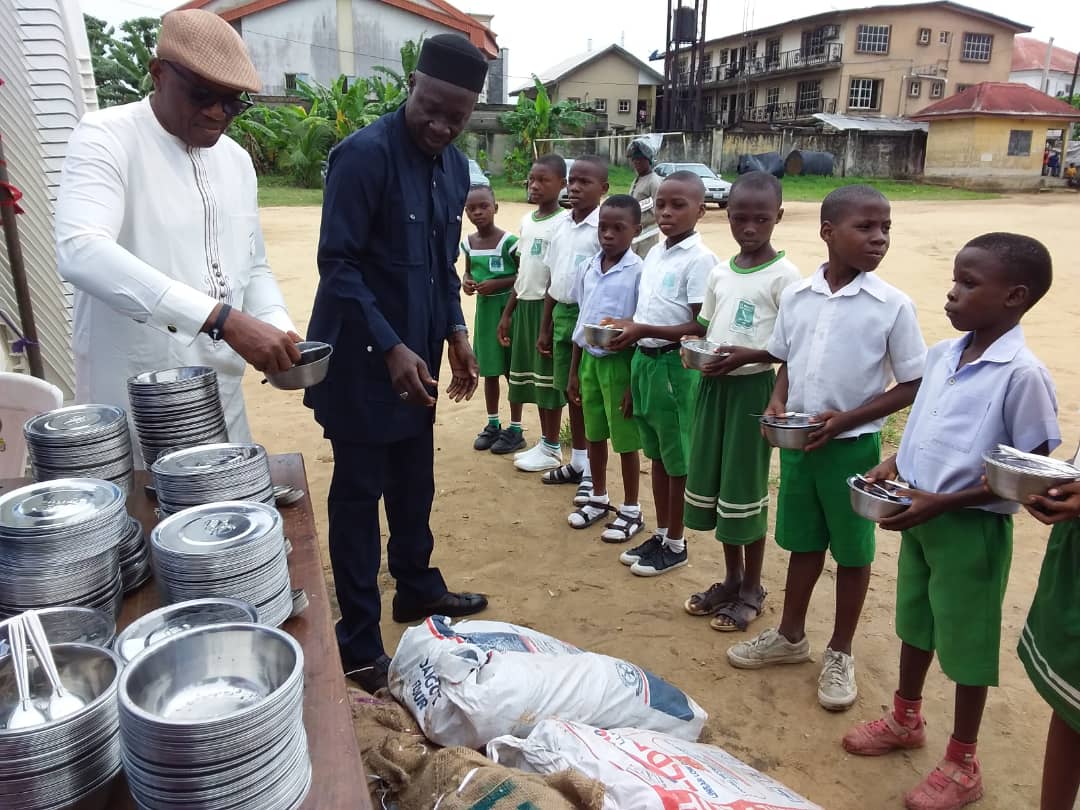 The federal government through the National Home-Grown School Feeding Programme (NHGSFP) has distributed feeding utensils to about 161, 575 pupils in public primary schools in Akwa Ibom.

Distributing the utensils on behalf of the FG on Friday in Uyo, Minister of Humanitarian Affairs, Disaster Management and Social Development Hajia Sadiya Farouq said the programme has improved school enrolment in public primary schools.

Farouq, who was represented by Mr. Charles Uko, Assistant Director in the ministry, said 899 public primary schools in Akwa Ibom have been selected to benefit from the national home-grown school feeding programme of the federal government.

She said that President Muhammadu Buhari has approved additional five million beneficiaries to join the programme after the nationwide enumeration exercise.

The Minister added that over nine million pupils were already being fed by over 100, 000 cooks across the country.

Farouq, who called on the state government to provide budgetary support to the school feeding programme, said that the FG has provided funds for feeding and logistics to procure, prepare and serve the meals.

“The National Home-Grown School feeding programme for which we have gathered today provides one free meal to over nine million pupils in primary schools across the nation.

“It is our fervent hope and appeal that these items are put to use as they were provided for so that these children benefit more, ” Farouq said.

Farouq sought the state government support for continuous sensitisation of communities and individuals through the various structures on the importance of the programme and the need for it to be safeguarded from all forms of corrupt practices.

In his welcome remarks, the State Focal Person of the National Social Investment Programme (NSIP), Dr. Godwin Akpan commended both the federal government and state government for sustaining the school feeding programme in the state since 2017.

Akpan noted that the programme has provided job opportunities to particularly, women, who serve as cooks and also farmers whose farm produce are being constantly demanded.

He appealed to the federal government to follow the current enumeration of schools and ensure that more school children in the state are being fed.

On behalf of the benefiting schools, the Head Mistress of St. Michael Primary School, in Uyo metropolis, Mrs. Victoria Jacob, thanked the federal government for the showing of love in providing the feeding utensils for the children.

Jacob assured the federal government that the children would put the feeding utensils to judicious use.