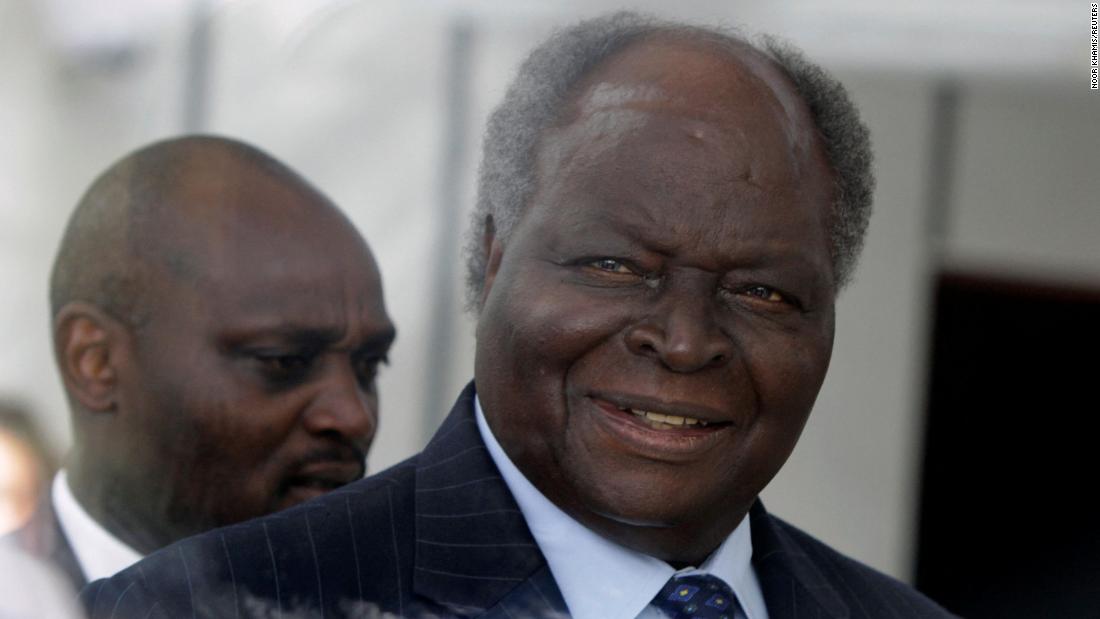 Kibaki, an economist and passionate golf player, left behind a complicated legacy when he stepped down after his second presidential term ended in 2013. He not only oversaw a new constitution that brought hope for change, he led Kenya during a period of robust economic growth and major infrastructure developments.
But he was also at the helm during the most violent election in the country’s history, when more than 1,200 people died in bloody ethnic battles after disputed 2007 polls.

Kibaki’s death was confirmed in a statement issued by Kenyatta, who said the country would observe a period of national mourning from Friday until his burial.

Kenyatta paid tribute to Kibaki as “the gentleman of Kenyan politics” and recalled “his dignity, his diligence, candor, and concern for the well-being of all Kenyans.”

“Kibaki was a quintessential patriot whose legacy of civic responsibility will continue to inspire generations of Kenyans long into our future,” Kenyatta said.

Ties broken with his predecessor

When Kibaki was first elected in 2002, the outgoing president had ruled Kenya since 1978, and was forced by the constitution to step down. Moi ceded power in a peaceful ceremony rarely seen in many African nations at the time. Gleeful Kenyans danced on the streets while others climbed trees and lamp posts to celebrate Kibaki’s win.

After decades of Moi’s autocratic rule, many described the scenes as reminiscent of the celebrations following Kenya’s independence from Britain in 1963.

Kibaki was Kenya’s finance minister through the 1970s under Jomo Kenyatta, the nation’s founding president. He later became vice president in the 1980s under Moi, but broke ties with him as his government became mired in corruption scandals and economic problems.

In the 1990s, Kibaki formed the Democratic Party, then considered the main opposition against the ruling KANU party — a monumental move in a country that had been served by a single party since independence. He helped galvanize a group of politicians and opposition parties disgruntled by Moi’s leadership. That group turned out to be his greatest asset, and helped propel him to power in 2002.

During his presidential campaign, he pledged to tackle corruption, boost the economy and rebuild the nation. After he won, he set the tone for the new era with a blunt rebuke of his predecessor.

“Fellow Kenyans, I am inheriting a country which has been badly ravaged by years of misrule and ineptitude,” Kibaki said during his first inauguration as a stone-faced Moi sat nearby. “There has been a wide disconnect between the people and the government, between people’s aspirations and the government’s attitude toward them.”

But while Kibaki initially waged a war on corruption, one of the nation’s biggest graft scandals was under his tenure. The multimillion-dollar Anglo Leasing case, which emerged two years after he took office, involved public cash being doled out to a complicated web of companies for a range of services — some of which were never delivered.

Despite the scandals, however, Kibaki also made major changes to public facilities, including introducing free basic education for children and revamping health care facilities. He was reelected to two terms and served as president until 2013.

When Kibaki was elected to a second term in 2007, the opposition decried the poll as rigged. It rejected the results and vowed to inaugurate the opposition leader, Raila Odinga, as president. The government deployed soldiers as supporters of the ruling party and the opposition took to the streets, sparking violence that left many dead.

The bloodshed stunned the world. Until then, Kenya enjoyed a reputation as one of the most stable nations in Africa. A stunned world watched as the country with a powerhouse economy and one of the most lucrative tourism industries in the region plunged into violence and uncertainty.

An intervention by the United Nations helped broker a peace deal, but Kenya lost its sheen as a model democracy.

Two years before the end of his second term, the nation’s famed tourist industry suffered major setbacks as Al-Shabaab militants from neighboring Somalia started attacking tourists in Kenya. Kibaki deployed the military into Somalia, sparking tensions between the two countries.

During his youth, he learned carpentry and masonry, and would help repair furniture at the boarding schools he attended. After graduating from the high-achieving Mangu High School in Kenya, he went to the prestigious Makerere University in Uganda — at the time described as the “Harvard University of Africa.”

He studied economics and political science at Makerere, and also served as the vice president of the student union. He later attended the London School of Economics, where he earned a bachelor’s degree in public finance. He returned to his alma mater, Makerere, and taught in the economics department.

Kibaki quit his job as a professor to join politics, serving in roles including member of parliament and minister of commerce, as well as finance minister. He was appointed vice president in 1978 — when Moi took over the reins following the death of Kenyatta.

Kibaki had unsuccessfully vied for the presidency twice, in 1991 and 1997, before he was finally elected.