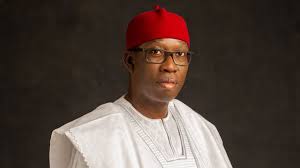 By Ifeanyi Olannye
Mr Olise Ifeajika, Chief Press Secretary (CPS) to Gov. Ifeanyi Okowa of Delta, said that establishing a mobile laboratory testing centre in Asaba has increased turnaround time for detection and treatment of Coronavirus patients in the state.

Ífeajika, who spoke in an interview with newsmen on Thursday in Asaba, said the state benefited immensely from having Sen. Ifeanyi Okowa, a medical doctor, as governor during the pandemic.

He said the noticed upsurge in confirmed cases of the pandemic in recent time in the state was due to the ramping up of testing, adding that it was good to discover and treat the cases early.

He said that the state government took early and proactive steps toward battling COVID -19 pandemic in the state.

He said that the state government took steps to establish holding and isolation centres, trained and re-trained medical personnel, procured necessary equipment even before the state recorded its index case on April 7.

“Delta is lucky leveraging on having a medical doctor as governor and if you recall that from the beginning, Sen. Ifeanyi Okowa showed great passion to fight the pandemic when it started.

“And, while other states were asleep – at the risk of being immodest, and even some countries, we were up and about immediately after the first one week that the pandemic hit the nation.

“Delta moved on and quickly established no fewer than 11 Holding Centres and four Isolation Centres across the state, with two here in Asaba, one at the Delta State University Teaching Hospital, Oghara and one in Warri.

“Initially, we in the South-South, had just one testing point and it is at Irrua Specialist Teaching Hospital in Edo, serving the entire region and that meant that every sample that was collected in any of the states was taken there and you can imagine the turnaround time in testing.

“But recently, we were lucky to now have a testing laboratory in Delta. We acquired that about three weeks ago and that has accounted for why we are now fast in testing.

“That’s why you can find the surge in the number of cases that we are recording now.

“It is a good thing for us because before now, we didn’t quite know how many people had it, but with the new testing centre now in Asaba, testing is faster.

“The major advantage in our own laboratory is that it is mobile and can be taken to anywhere within the state to carry out tests,” he said.

Ifeajika disclosed that Warri was the epicentre of the pandemic in the state, and had recorded 10 confirmed cases out of which seven were active while three had been discharged.

“That’s the highest we have in the state; other cases across other local government areas are being managed well,” he said.

He said that the state government procured 19 ventilators and other facilities.

“We are quite on ground and like you may have known before now, while other states were grappling with what to do with the pandemic, Delta was already ahead with measures.

“Apart from those holding centres and the isolation centres we had, trainings were conducted for our medical personnel.

“They were trained and necessary equipment procured even when we didn’t have any case at that time.

“When we eventually had the index case about three weeks into the pandemic, we were ready; so, we were not caught napping at all and of course, that index case survived and has been discharged long ago.

“The second case we lost because he presented himself very late while other cases have been well managed so far,’’ he said.

Ifeajika added, “all our equipment are brand new and they are working very well, and even the people managing them, including drivers who move the vehicles and even cleaners, everybody involved in the management of the Coronavirus have had one training or the other.

The CPS also disclosed that all the health personnel involved in managing the pandemic in the state had been enrolled in a life insurance package, about 2557 health workers, adding that allowances were also being paid to the front line workers.

“Essentially, everybody involved in the management of Coronavirus has been insured; they are captured in this insurance package and, as we progress, there could be need to bring in new persons outside those that have been managing it for now.

“So, the entire spectrum of the health personnel has been insured. Besides, for those who are involved now, you may wish to know that allowances are being paid to them,” he said.

He said that the governor was compassionate enough to have established a food bank from where food items were distributed to vulnerable individuals and families across the state.

He added that the government also produced one million facemasks and distributed evenly to the vulnerable across the 25 local government areas in the state.

“After the first 14 days of lockdown in the state, there was this agitation of hunger.

“And our governor being a compassionate man that he is, listened and had to open up the state partially to allow businesses to open and transporters to operate, and in the course of doing that, the food bank was established.

“The governor announced that when we had enough in that food bank, the items would be rolled out and that happened about a month ago when the bank was opened and rice, beans, noodles and other items were taken out to the citizens, especially the vulnerable.

“Beyond that, the government produced one million face masks because we made the wearing of face masks in public places compulsory.

“To walk that talk, the government produced one million face masks and gave to the people, especially the vulnerable who cannot afford it,” Ifeajika said.