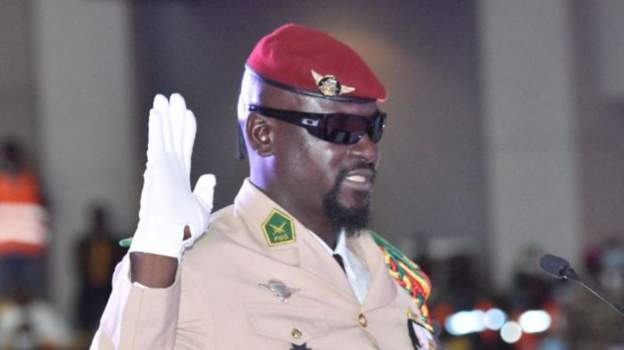 There is music and dancing in the streets of Conakry to celebrate the first year in power of Guinea’s junta that overthrew the government of Alpha Condé. However, a coalition of civil society groups, the National Front for the Defence of the Constitution (FNDC) has called for demonstrators to protest against the authorities.A year ago, the elected president of Guinea was overthrown by the country’s armed forces, after a series of protests over a controversial third term.Col Mamady Doumbouya took power and promised to restore democracy, but the junta’s decision to announce a three-year transition period to democracy sparked new demonstrations which were violently repressed, despite many initially welcoming the coup as a fresh start for the west African nation.In Conakry, many Guineans have told the BBC that the regime of Col Doumbouya has been disappointing, referencing “eight young Guineans” they say “were shot dead in the middle of the street”.The police have previously denied violence towards protesters.Many in the country support the FNDC, which organised protests against what they view as the lack of “credible dialogue” with the authorities. But several other groups still support the transitional government, including one man who told the BBC he believes President Doumbouya will restore civilian rule.”Col Doumbouya said and repeated that he would lead us to a better future during his time as president of the transition and I’m sure he’ll do it,” he said.Read more about Guinea’s coup:Guinea coup attempt: Soldiers claim to seize power from Alpha CondéMamady Doumbouya: Guinea coup leader sworn in as presidentGuinea coup: Who is Col Mamady Doumbouya?