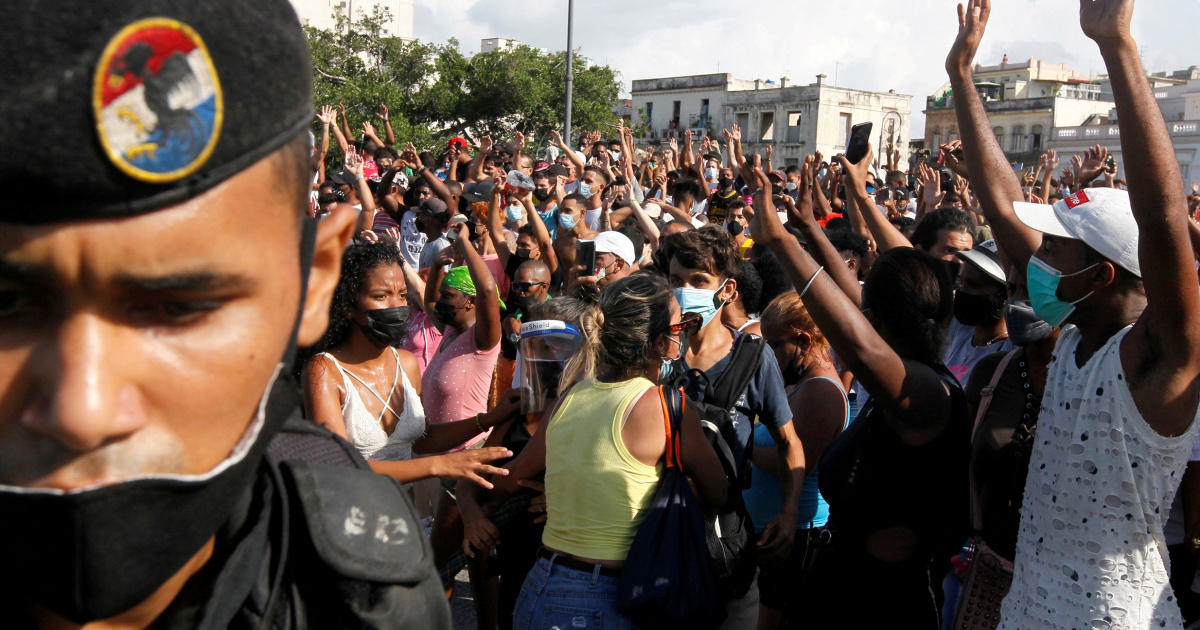 A man died during an anti-government protest on Monday on the outskirts of Havana, the Cuban interior ministry said on Tuesday, as rare demonstrations spurred by economic inequalities have rocked the island.

Protesters took to the streets of the Cuban capital as well as other cities across the country on Sunday to denounce the government of President Miguel Diaz-Canel amid food shortages and a deep economic crisis worsened by the coronavirus pandemic.

The rallies have been met with a wave of arrests and allegations of police brutality, as authorities cracked down on demonstrators.

The interior ministry said on Tuesday that it “mourns the death” of a 36-year-old man named as Diubis Laurencio Tejeda, who the state news agency said had taken part in the “disturbances”.

The Cuban News Agency said “organised groups of antisocial and criminal elements” had tried to reach the suburb of La Guinera’s police station, with the aim of attacking its officials and damaging the infrastructure.

Several citizens and security officials were injured in the protest, the report also said. It did not say how the man died.

This is the first confirmed death linked to the protests, which are the largest in Cuba in decades.

Waldo Herrera, a 49-year-old resident of La Guinera, told the Reuters news agency that protesters were “marching peacefully, shouting slogans like ‘Down with communism,’ ‘freedom for the people of Cuba,’ ‘we don’t have medicine, we need food.’”

Diaz-Canel has blamed the unrest on the United States, calling on defenders of the Cuban revolution to take to the streets on Sunday to counter the anti-government demonstrators.

The Cuban president also said US sanctions on the country are fuelling misery.

Amnesty International said it had received with alarm reports of “internet blackouts, arbitrary arrests, excessive use of force – including police firing on demonstrators”.

At least 100 protesters, activists, and independent journalists had been detained nationwide since Sunday, according to exiled rights group Cubalex. Some were detained at the protests but others as they tried to leave their homes, the organisation said.

The Cuban government did not immediately comment on the arrests.

Cuba also has seen a recent surge in coronavirus infections, as doctors and nurses urge people to get jabs to stem the spread of the virus. The country has reported more than 250,500 cases and more than 1,600 deaths to date, according to Johns Hopkins University data.

“The pattern of restrictions observed in Cuba indicate an ongoing crackdown on messaging platforms used to organize and share news of protests in real-time,” said the group’s director, Alp Toker. “At the same time, some connectivity is preserved to maintain a semblance of normality.”

The government did not immediately respond to a request for comment from Reuters.

As the uncertainty in Cuba continues, US Secretary of the Department of Homeland Security Alejandro Mayorkas on Tuesday said migrants considering making a journey to the US irregularly by sea will not be allowed into the country.

“Any migrant intercepted at sea, regardless of their nationality, will not be permitted to enter the United States,” Mayorkas said in a news briefing. “This risk is not worth taking.”

It is not yet clear whether the unrest could lead to even more people trying to flee the island, which is just across the Florida Straits from the US. Mayorkas said 20 people have died in recent weeks during these voyages. “Our priority is to preserve and save lives,” he said.