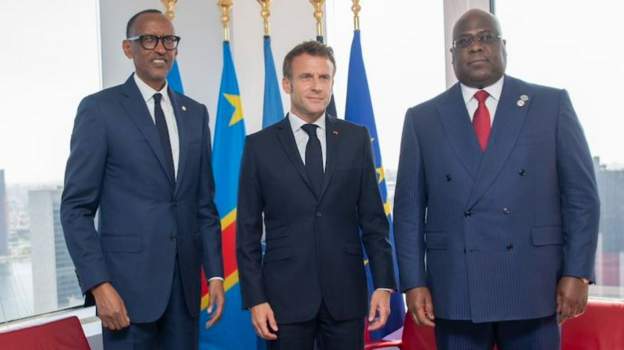 French President Emmanuel Macron met the leaders of Rwanda and the Democratic Republic of Congo amid tensions between the two East African neighbours over rebel activity near their common border.

The three leaders met on Wednesday on the sidelines of the UN General Assembly in New York.

The leaders want to “intensify lasting co-operation to fight impunity and put an end to activities of armed groups in the Great Lakes region,” state-owned France 24 quoted the French presidency as saying.

The Congolese presidency tweeted they had agreed to work together for M23 rebels to withdraw from occupied areas “as soon as possible” and for displaced people to return.

The rebel group has controlled parts of DR Congo’s northern province since June.

Mr Kagame supported a regional initiative to end the resurgence of fighting in eastern DR Congo but said it would “require consistent financial support from the international community”.

In his address to the General Assembly on Tuesday, Congolese President Félix Tshisekedi denounced Rwanda’s support for M23 rebels.