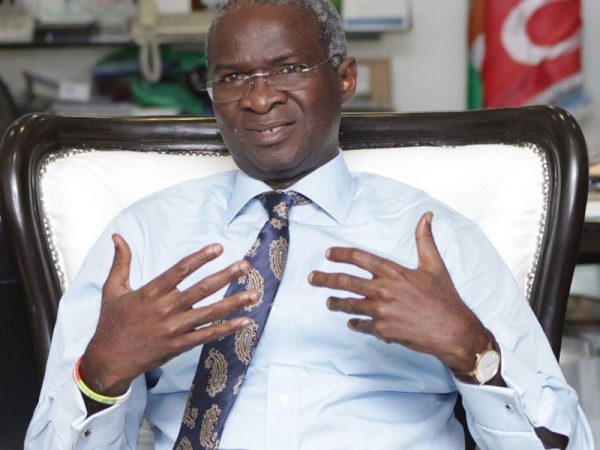 Travellers going to the east from the north now have a better and shorter alternative route with the near completion of the Loko-Oweto bridge.

The Minister of Works, Mr Babatunde Fashola said this during inspection of the on-going construction works on the Loko-Oweto bridge in Nasarawa Local Government Area of Nasarawa State, North Central zone of the country.

He said the bridge had been completed only the connecting roads was left and that would soon be done.

He said the bridge would serve as alternative and less expensive route for those travelling to the eastern part of Nigeria, further promoting national integration and unity.

“Loko-Oweto bridge that connects the north and south of Nigeria from the Benue Loko-Oweto side to Loko in Nasarawa and links you to the Federal Capital;

“So this is a major strategic transport route to connect this part of the country to and all those coming from the east of Nigeria.

“If you are familiar with the territory of Benue state you would know that from Otukpo through to Otukpa to Obollo Afor and link the east of Nigeria and reduce the journey time between eastern Nigeria, the Federal Capital and Nasarawa and naeibhouring states by many hours now you can make this connection for about six hours.

“This is a major impact on business reducing the cost time and improving the ease of doing business.

“The entire bridge is completed the only work remaining now is the connecting roads to link the bridge to the towns.’’

He said the road from Otukpo to Oweto had been completed; it is just three and half kilometre more to link the bridge to that road on the Benue side.

Fashola explained that there was still some work to be done on the Loko side which have about 74 kilometres of connecting roads to be completed.

“So, this is a major intervention from the Buhari administration in linking Nigeria, this is the bridge that crosses the River Benue while the second Niger bridge is also going on; two major bridge intervention of the two largest rivers in the country.

“To improve national integration and breed further co-existence and interaction among the people of this country.

“It is going to develop into a major economic route for Nigeria especially for farming produce and farmers and agricultural produce.’’

On when the bridge is to be delivered, Fashola said funds and the global economy were all challenges that was confronting the completion of the work but was optimistic that the bridge would be delivered soon.

The Emir of Loko, Alhaji Abubakar Umar,  who spoke through an interpreter, Loko Babangida, commended the administration of President Muhammadu Buhari.

The traditional ruler noted that the project had brought development and improvement of life to his people.

He added that since the road was opened hundreds of vehicles go through the area bringing business to his people.

The News Agency of Nigeria  (NAN) reports that the 2.2km bridge is 1,835 metres connecting another bridge of 220 metres, and an inland of 550 metres.

The roads had been opened up to vehicle movement and trucks and transporters use it as a shorter route.