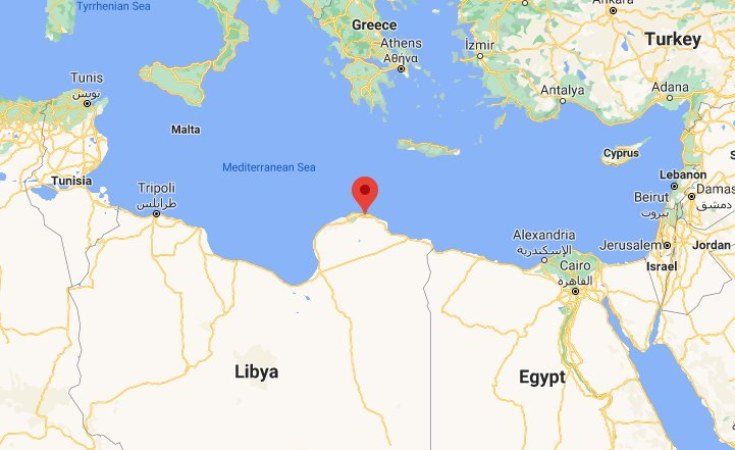 A map showing the location of the Raas al-Hilal port in Libya, in relation to Turkey.

Khalifa Haftar’s Libyan National Army (LNA) have accused Turkey of continuing to supply the GNA with arms and fighters. Its forces seized a Turkish container ship in the Mediterranean.

The Turkish foreign ministry on Tuesday condemned the seizure of a Turkish cargo ship in the Mediterranean by Libya’s eastern-based forces.

Commander Khalifa Haftar’s Libyan National Army (LNA) said they intercepted the Jamaica-flagged ship as it headed to the port of Misrata in western Libya.

An LNA spokesman said the ship, named Mabrouka, entered a prohibited area and its crew did not respond to a call from the Libyan navy. It was then towed to Raas al-Hilal port.

He said the ship and its crew of 17 — including nine Turkish citizens, seven from India, and one from Azerbaijan — were under investigation for violating maritime regulations and laws.

Turkey and Qatar back the internationally recognized Government of National Accord (GNA) in Tripoli, which Haftar opposes. Haftar’s forces are principally backed by Egypt, the United Arab Emirates and Saudi Arabia.

The latest incident will likely escalate tensions after weeks of relative calm.

The Turkish foreign minister called for immediate steps to enable the ship resume its planned journey.

The ministry said Haftar’s forces “continue their aggressive attitude” as the United Nations leads a political process in Libya aimed at elections next year. It warned of “serious consequences” if Turkish interests were targeted.

“In a period when the political process under UN auspices is underway between our Libyan brothers, Haftar and his militia are continuing their hostile stance,” the ministry said.

It is the second Turkish-owned vessel seized by the LNA this year, according to private maritime intelligence firm Ambrey Intelligence.

The North African country has been split into rival administrations since the 2011 uprising that ousted longtime dictator Moammar Gadhafi. The struggle between the Tripoli-based GNA and the LNA, based in the eastern city of Tobruk, has become an international proxy battle.

Haftar’s forces led a year-long attempt to take over Tripoli but were thwarted in June when Turkish support helped Tripoli-allied militias to gain the upper hand.

In October, the GNA and LNA signed a ceasefire deal, however, neither side has withdrawn forces from the frontline, as demanded by the truce.

On Monday, the LNA accused Turkey of continuing to supply the GNA with arms and fighters.

Last month, Turkey and Germany argued over the search of a Turkish freight ship by a European Union military mission aimed at enforcing the Libyan arms embargo.