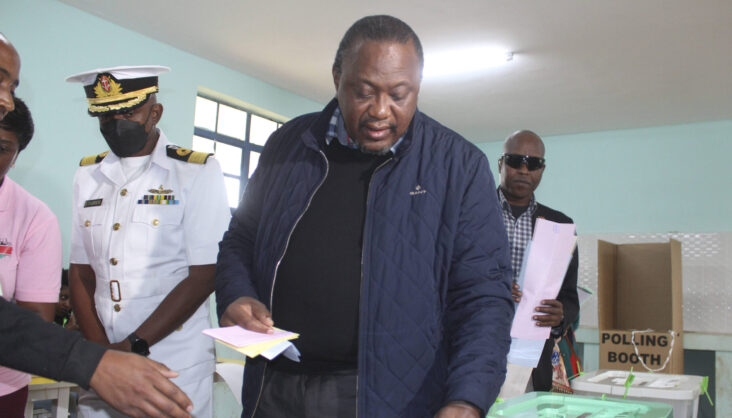 Kenyatta has not said a word about William Ruto’s narrow win, not even a formal congratulations, after Raila Odinga – who he was backing as his successor – rejected the results, terming them null and void.

However, during a meeting with religious leaders in Nairobi on Thursday, Kenyatta assured them that the transition would proceed without problems.

Earlier, he had made similar remarks to visiting US congressional leaders led by Senator Chris Coons, who also met Ruto and Raila to discuss matters related to last week’s election.

1/3
President Uhuru Kenyatta on Thursday met and held discussions with visiting US Senator Chris Coons who paid him a courtesy call at State House Nairobi.

“President Kenyatta assured them that the process of transition will be smooth,” State House said on Twitter.

The president also urged Kenyans to maintain peace and patience during the transition period, adding that he wants the country to be a shining example of democracy in Africa and the world.

“Kenya will remain steadfast in entrenching the principles of good governance,” he said.

Supporters and close confidants of Ruto are seemingly unhappy with Kenyatta’s silence with regards to their candidate’s win.

Ruto’s deputy, Rigathi Gachagua, insists that the swearing-in ceremony should take place with or without Kenyatta.

“Up to now, President Kenyatta hasn’t spoken to President-elect Ruto. We shall not force him to congratulate us,” he says.

Another Ruto confidant, Senator Moses Wetangula, says this is not the first time an out-going president has refused to acknowledge his successor’s win.

Wetang’ula cites former US President Donald Trump, who refused to congratulate Joe Biden after his win in the 2020 election.

“Whether he [Kenyatta] says anything or not, it does not matter now. The people voted for Ruto,’’ Wetang’ula says.

However, Ochol says the president will likely await for the outcome of Raila’s petition against Ruto’s win at the Supreme Court before he comments on the results.

“Kenyatta would like to leave a united and peaceful country. He will eventually speak and hand over power,” the analyst tells The Africa Report.

Procedure on swearing in president-elect

Following the declaration of the final presidential results, the committee of Assumption of the Office of the President must ensure that the president-elect and his deputy are accorded necessary security, as per the President Act of 2012.

The new president must be sworn in 14 days after the final results are announced, assuming there is no pending court case contesting his or her win.

Their swearing-in must take place in the country’s capital, Nairobi, before the chief justice between 10am and 2pm.

The outgoing president is expected to hand over the symbols of power and authority, which are a sword and the Constitution.