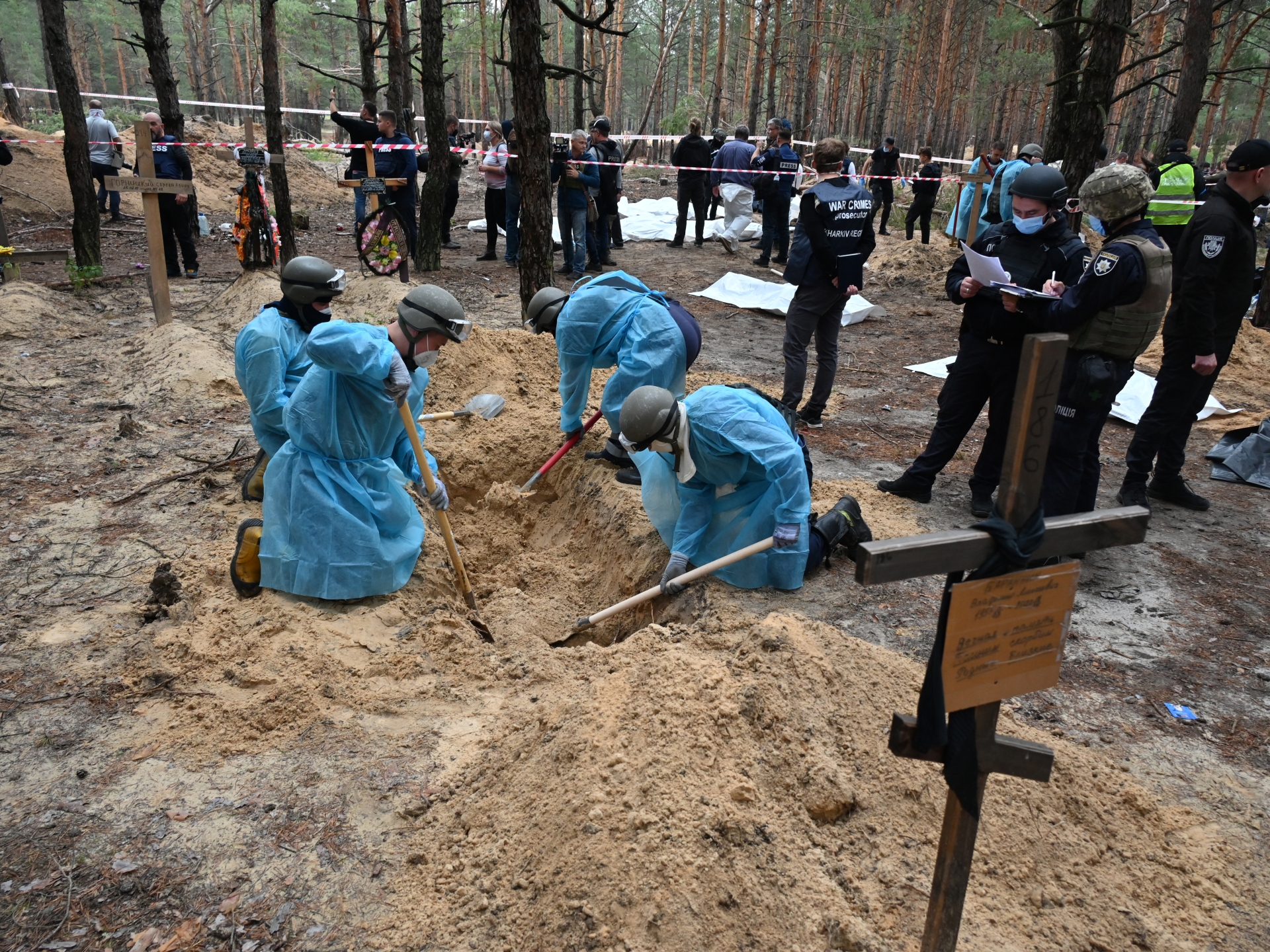 These ghastly figures illustrate the widespread and systematic nature of crimes committed against Ukrainians. At some point in the near future, justice will not be measured in the number of atrocities tabulated and counted, but in how many fair and impartial trials of alleged perpetrators proceed through courts.

We have witnessed a steady stream of gruesome revelations evidencing Russian atrocities. Few will forget the images that poured out of Bucha in April, of civilians killed, their corpses left haphazardly strewn along village streets. Such scenes have become so regular an occurrence that freshly unearthed evidence of mass graves containing civilians in Izyum comes as anything but a surprise. It is par for the course.

War crimes and atrocity are Moscow’s calling card. When Russian soldiers are driven out of Ukrainian villages and cities, they invariably leave behind a trail of horror, the depraved pageantry of invading forces who give little thought to civilian life.

Soon after Russia’s full-scale invasion, Ukraine and its allies, along with international institutions, declared that they would work together to investigate Russian atrocities and prosecute anyone responsible for war crimes, crimes against humanity, and genocide.

Following requests from some 41 states, the International Criminal Court (ICC) opened an investigation into atrocities committed during the war. Numerous countries also opened their own investigations into war crimes perpetrated in Ukraine.

Because the sheer number of crimes committed would overwhelm even the most sophisticated justice system, scholars and diplomats have put forward proposals for a specialised tribunal that would work with Ukrainians to address international crimes. Unlike so many other contexts, states have not just talked the talk on justice and accountability in Ukraine; they have walked the walk – and put their money where their mouths are. They have pledged funding as well as personnel in support of war crimes investigations.

Yet seven months into the war, victims and survivors are still waiting for results. The ICC has yet to issue any arrest warrants, a specialised “hybrid” tribunal has not been created, and only a handful of trials, for low-ranking soldiers, have proceeded through Ukraine’s court system.

To be sure, it is one thing to insist that Ukraine and its allies make good on promises of justice; it is another thing altogether to deliver accountability.

Those involved must balance their desire to swiftly achieve tangible results with the diligence and care that is needed when investigating matters as complex as international crimes. Put another way, the need to deliver accountability and initiate trials must be weighed against the fact that rushed investigations and prosecutions are a surefire way of making mistakes, especially during an ongoing war. In independent and impartial courts, the overzealousness and impatience of prosecutors often result in cases collapsing and accountability efforts being undermined.

At the same time, there are many instances in recent history where accountability was severely delayed. For example, those allegedly responsible for the 2009 mass killing at Guinea’s national stadium in Conakry, where 157 people were massacred and more than 100 women raped, are standing trial only this year. That is 13 years after the crime took place and the ICC began its preliminary examination into the massacre.

There is an old adage, almost a cliché, in international law circles: justice delayed is justice denied. Some delay may, however, mean justice delivered, not denied. Trial justice should only be attempted when sufficient evidence has been collected and fair trials are possible. That can take time. There is thus no “Goldilocks zone”, no perfect moment when prosecutions should start.

That said, it is crucial that Ukraine and its allies turn their promises of justice into results, sooner rather than later. People are connecting the dots: if 34,000 war crimes have been documented, surely more than a handful can be prosecuted.

Informing the media of the growing number of war crimes committed against Ukrainians serves a purpose: it helps remind us that the Ukrainian people are victims of an illegal war. It also encourages us not to become numb to the toll of this conflict. Without results from actual prosecutions, however, it will not be the atrocities we risk becoming inured to, but the talk of accountability.

As forensic investigators pulled up bodies from mass graves outside Izyum, diplomats reaffirmed their commitment to justice. Speaking on behalf of the European Union presidency, Czech Foreign Minister Jan Lipavsky echoed what many other world leaders have said for months: “We stand for the punishment of all war criminals.”

Whether it is at the ICC, a special court that combines international and Ukrainian law and staff, the judiciaries of European states, Ukraine’s own court system, or, ideally, all of the above, it is time to move from standing for prosecutions to conducting them.