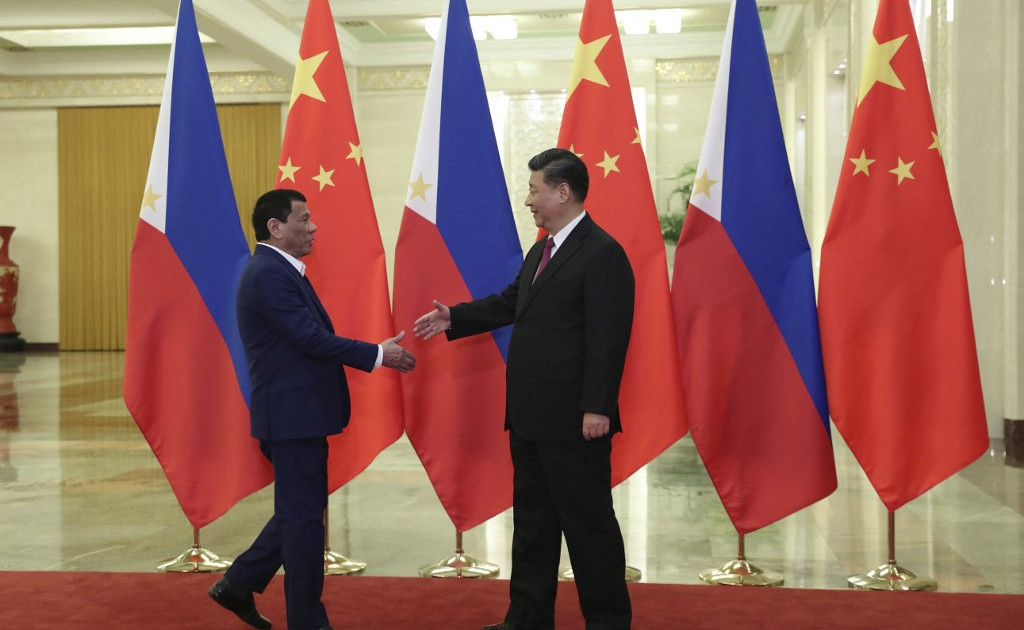 In the days leading up to the fifth anniversary on Monday of The Hague’s 2016 ruling that rejected China’s historical claim to most of the disputed South China Sea, the Philippines’ often abrasive Foreign Affairs Secretary Teodoro Locsin Jr sounded celebratory, hailing the occasion as “a milestone in the corpus of international law”.

“The Philippines is proud to have contributed to the international rules-based order,” he said of Manila’s role in challenging Beijing before the Permanent Court of Arbitration.

In a dig at China, Locsin said that the decision “dashed among others a nine-dash line; and any expectation that possession is nine-tenths of the law.”

Locsin then cited Philippine President Rodrigo Duterte’s videotaped message at the UN General Assembly, in which the Filipino leader said the case was now “beyond compromise and beyond the reach of passing governments to dilute, diminish or abandon”.

But since taking office in 2016, Duterte has usually been less assertive – failing to challenge China’s moves to expand its maritime dominance in the region despite the landmark victory – and foreign policy experts said his “defeatist rhetoric” has compromised the country’s integrity and diminished its legal standing.

“Manila certainly missed a chance to echo a consistent unified narrative on its claims … which Beijing saw as an opportunity to flex its muscles and build the largest coast guard and maritime militia for its strategic advantage,” said Chester Cabalza, president and founder of Manila-based think-tank International Development and Security Cooperation.

“Instead, Filipinos heard defeatist rhetoric from the commander-in-chief as he kept mum on continuous Chinese incursions into the Philippines’ exclusive economic zone (EEZ),” he told Al Jazeera.

Collin Koh, research fellow at Singapore’s Institute of Defence and Strategic Studies, said the Duterte administration “squandered the opportunity” in emphasising the significance of the decision “whether it ought to be doing it alone or in concert with like-minded external parties” such as the Association of Southeast Asian Nations (ASEAN) and the United States.

It was in July 2016, less than two weeks into the Duterte presidency when The Hague tribunal concluded, based on the United Nations Convention on the Law of the Sea (UNCLOS), that China’s assertion of historic rights within its “nine-dash line” and maritime entitlements over most of the South China Sea had “no legal basis”.

The ruling also affirmed the Philippines’ jurisdiction over its exclusive economic zone (EEZ), which stretches 200 nautical miles (370km) from its coast. As such, China’s fishing activities and construction of artificial islands within that area were deemed an infringement of Philippine sovereign rights. The Philippines refers to that particular area as the West Philippine Sea.

Moreover, the court ruled that of all disputed South China Sea features – even those controlled by Beijing – none were considered “habitable” and able to sustain economic activity in its original form, and therefore were not entitled to an EEZ – thus clearly falling within Philippine EEZ.

To commemorate the ruling this year, Philippine Senator Risa Hontiveros has proposed that the country declare July 12 as the National West Philippine Sea Victory Day.

In a statement sent to Al Jazeera, she said Duterte’s predecessor, Benigno Aquino III – who died last month – should also be commended for his decision to take on China and secure a “landmark legal victory”.

“Even when the Philippines was going against the Goliath that is China, he pursued the case merely on the principle that it was the right thing to do.”

Protests are also expected on Monday outside China’s diplomatic mission in Manila.

China has said repeatedly that it does not recognise the 2016 ruling, and has continued to expand its artificial islands in Mischief Reef, as well as in Scarborough Shoal, which Manila lost to Beijing in 2012.

Campaigning for the presidency in 2016, Duterte charmed voters with his hardline stance on China. In one campaign swing, he promised to ride a jet ski in the South China Sea and challenge the Chinese incursion in Philippine waters. He said he always wanted to die a hero.

But as soon as he became president, Duterte started to backpedal on his promises, saying the Philippines cannot afford to take on China because a confrontation would only lead to bloodshed.

In a Talk to Al Jazeera interview in October 2016, Duterte also said that his jet ski remark was a “hyperbole” and that he did not even know how to swim. He later said it was all “a joke” to show his “bravado”, and that only “stupid” people would believe it.

In a stunning admission in June 2019, Duterte said he had reached a verbal agreement with Chinese President Xi Jinping in 2016 allowing China to fish within the Philippines’s EEZ, despite a constitutional mandate that the state must protect its marine wealth, including its EEZ, and “reserve its use and enjoyment exclusively to Filipino citizens”.

“It was a mutual agreement,” Duterte explained. “Let’s give way to each other. You fish there, I fish here.”

In several public remarks, Duterte has emphasised that better relations with China have brought economic dividends to the Philippines, through direct investments, financial assistance and loans.

Salvador Panelo, who was Duterte’s spokesman at the time, defended the deal saying that while it was “verbal” it was still “valid and binding”.

But Panelo’s replacement, Harry Roque, said this April that there was “no truth” to the deal and that it was “quite simply conjecture”.

“No such treaty or agreement exists between the Philippines and China,” Roque said, explaining that even a fishing agreement “can only be done through a treaty” and in “written form”.

Amid the Duterte administration’s diplomatic dithering, the situation in the South China Sea came to a head earlier this year, when several reports revealed that hundreds of Chinese vessels had gathered within the Philippine EEZ.

The “swarming incident” has since been repeated several times, prompting several diplomatic protests by Manila, which denounced Beijing’s “blatant disregard” of its commitment “to promote peace and stability in the region”.

In May, the presence of hundreds of Chinese vessels so exasperated Locsin, the Philippines’ top diplomat, that he fired an expletive-laden statement on social media.

According to reports, Manila has filed more than 120 diplomatic protests with China over incidents in the disputed waters since 2016.

In the past two and a half months, the Philippines has increased its patrols across the South China Sea beyond anything seen in recent years. AMTI tracks their activities and their encounters with Chinese vessels in a new feature: https://t.co/MsEEx0IpLs pic.twitter.com/tN91IqP2C7

In recent months, he has said that he wants to maintain friendly ties with China, citing Manila’s “debt of gratitude” for Beijing’s help in providing coronavirus vaccines. He has also banned his Cabinet from speaking about the South China Sea, after key security and diplomatic officials criticised China for the swarming.

But despite Duterte’s efforts to cosy up to Beijing, observers say China has only been further “emboldened”, and the growing tension has now left Manila with no choice but to step up its action to assert its rightful place in the South China Sea.

Cabalza, the security analyst based in Manila, said that now is not the time for the Duterte administration to be “flip-flopping on foreign policy”, urging a “more strategic” approach that balances the country’s economic and security interests.

“China’s art of war and deception should not be taken for granted.”

He urged the Philippines to “fast-track” its military modernisation programme “to increase its presence in the aerial and maritime domains” and halt the Chinese incursions.

“If Manila seriously considers balanced and fearless engagement with Beijing, it needs to capacitate on strengthening a robust national security infrastructure that deals with China’s grey zone strategy and massive disinformation,” he said, adding that Manila should also continue filing diplomatic protests every time an incursion happens.

Koh, the foreign affairs analyst from Singapore’s S Rajaratnam School of International Studies, also noted how the Philippines has lagged over the years in “building up the stick” in terms of military capacity to carry out “more vigorously” maritime patrols within its EEZ.

That could have been partly addressed by Manila if Duterte had not gone out of his way to gradually undermine its decades-long alliance with the US, Koh said. Since the beginning of his presidency, Duterte has shown his disdain towards the US, even making the unsubstantiated claim that he could be a target of the CIA.

“The open expression of desire to prioritise ties with Beijing – even at the expense of the 2016 award, the lack of political will to maintain persistent maritime presence and the alliance relationship with the US would have had the combined effect of emboldening Beijing,” he explained to Al Jazeera.

With the progress China made in fortifying its artificial islands in the South China Sea, it will be “impossible to even envisage” that it would “willingly relinquish those possessions” within the Philippines’ EEZ, Koh said.

“There’s no way to reverse the fait accompli short of evicting the Chinese from those artificial outposts by use of force, which would mean war.”

Without resorting to armed conflict, it is still possible for the Philippines to assert its maritime sovereignty and rights by putting “a principled and consistent stance” on the issue, Koh added.

He says the Philippines should pursue daily maritime law enforcement actions and patrols of its EEZ.

“The recent Philippine Coast Guard challenge and dispersal of Chinese and other foreign fishing vessels in the Philippine EEZ, around Sabina Shoal and Marie Louise Bank, is a good example,” Koh said.

“These actions may not compel China to reverse its acts in the South China Sea, but at the very least may help deter Beijing from thinking of more drastic actions to further undermine the status quo.”

In May, Chinese vessels also left Sabina Shoal, after the Philippines issued a radio challenge.

Hontiveros, an opposition senator and critic of Duterte’s South China Sea policy said the radio challenges showed that “the Philippines can assert our ownership of the West Philippine Sea without resorting to war.”

As a middle power caught in the increasingly heated rivalry between China and the US, the lesson for Manila is to pursue an independent foreign policy, according to Cabalza, the foreign affairs expert who has also studied at the National Defence University in Beijing.

“Manila should choose its own national interest. It takes courage to depend on its own capability and build it with a vision to protect the country’s own sovereignty and territorial integrity.”