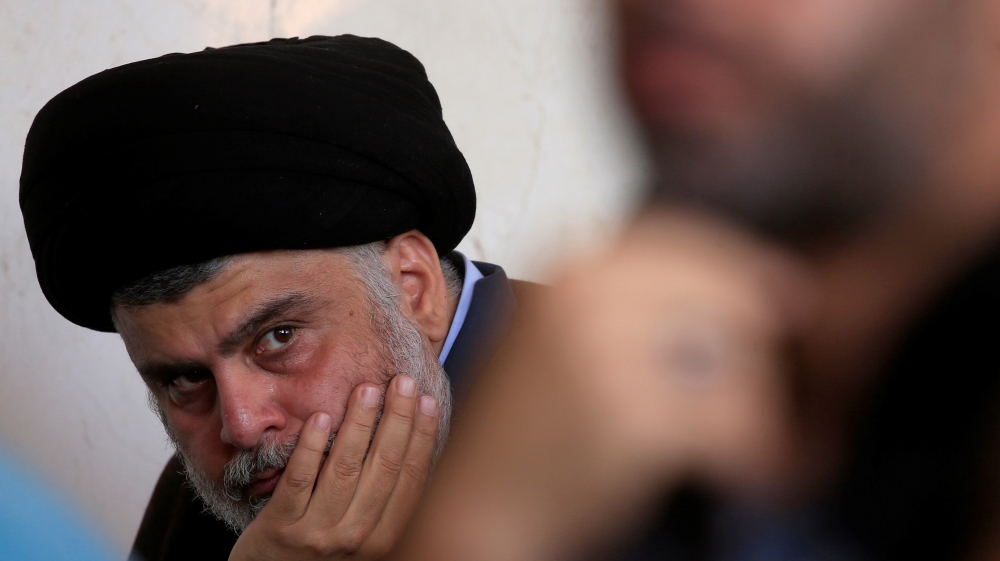 Muqtada al-Sadr says he is withdrawing support from the current government and the one that will be elected to replace it.

Shia leader Muqtada al-Sadr has announced he will not take part in Iraq’s upcoming election in October, saying he is withdrawing his support from the current government and the one that will be elected to replace it.

One of the most influential figures in Iraq, al-Sadr led a political bloc that emerged as the biggest in the 2018 parliamentary election, with 54 seats in the 329-seat legislature.

“To preserve what is left of the country and to save the country … I inform you that I will not take part in this election,” al-Sadr said on Thursday.

Addressing the “great Iraqi people”, he said in a televised speech: “Do not sell your homeland [to the corrupt] at any price, it is more valuable than anything else.”

Al-Sadr, a longtime adversary of the United States in Iraq who has also opposed Iranian influence in the country, has millions of followers in Iraq and controls a large paramilitary group.

The effect of al-Sadr’s announcement was difficult to assess immediately. He has withdrawn from front-line politics before for years at a time, and has typically wielded his power without holding elected office. Even if he does not run, candidates loyal to him could stand in the election, allowing him to retain his influence.

The boycott could be a blow to election plans by Prime Minister Mustafa al-Kadhimi, who had called the early vote in response to demands by pro-democracy activists.

Over the past two years, al-Sadr’s political organisation has quietly come to dominate the apparatus of the Iraqi state. Its members have taken senior jobs within the interior, defence and communications ministries.

Al-Sadr said he was “withdrawing his hand from those who belong to this current government and the following one”.

He said Iraq was being subjected to a “satanic regional scheme to humiliate the country and to bring it to its knees”, driven by fear of those who were seeking reform and to eradicate corruption.

“If our homeland is hostage to injustice and tragedy, its fate may fall victim … to local, regional and international policies,” he said.

Al-Sadr’s comments come as many in the country mourn the death of at least 90 people who were killed in a fire that tore through a coronavirus ward at a hospital in southern Iraq.

Officials said more than 100 people were also injured in the blaze at al-Hussein Teaching Hospital on Monday night in Nasiriya, highlighting the crippled healthcare system in the country after decades of war and sanctions.

In April, a similar explosion at a COVID-19 hospital in the capital, Baghdad, killed at least 82 and wounded 110.

Driven by anger over official corruption, high unemployment and poor public services, waves of nationwide anti-government protests have been taking place since October 2019.

Protesters have demanded the departure of the country’s ruling elite and an overhaul of the political system that was established in the wake of the 2003 US-led invasion.