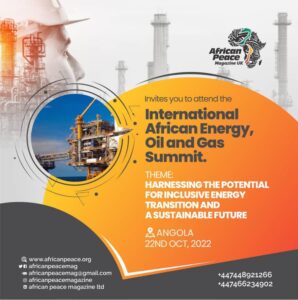 Inflationary pressures brought on by the lingering pandemic, the Russia-Ukraine conflict, and current geopolitical tensions have a direct impact on nations, particularly on Africa and the Afro-Caribbean countries’ capacity to address persistent economic challenges and the many threats to the peace and stability of the region.

Furthermore, over 2.2 billion people are expected to live in Africa by 2050, accounting for more than half of the increase in the world’s population. Due to the difficulties involved, experts have cautioned that unfavorable weather, armed conflict, and inflation would significantly increase the percentage of Africans who experience food shortages. Sadly, it has also been predicted that over 38.3 Million Africans will face severe food shortages and crises.

Looking inward, utilizing the African Continental Trade Agreement to boost intra-continental trade, taking advantage of our natural resources to our advantage, and, most importantly, making the most of the global transition to the green energy sector for the benefit of the continent are all significant ways to address this issue.

On this note we specially invite you to attend the International African Energy, Oil and Gas Summit 2022, with the theme ‘Harnessing the Potential for Inclusive Energy Transition and A Sustainable Future’, Scheduled to hold in Angola from the 22nd of October 2022.

In January 2022, Angola’s oil output was estimated to be 1.32 million barrels per day. This further confirms that a significant portion of the nation’s revenue—nearly 75%—comes from the petroleum industry. Natural gas production from related oil is estimated to be 17.9 billion cubic feet per year.

In terms of continent-wide producers with the largest oil reserves, Angola comes in at number four. According to PetroAngola, the nation has a reserve of 7.23 billion barrels.

The event, which is a solidly packed networking opportunity for its attendees is brought to you with the support and endorsement of the Angolan Government. As a result of the event’s strong positioning of Africa for global market integration, it would serve as a recognized avenue for delegates to interact with investors and high-level personalities from across the world.

The event would support the positioning of your brand as a major force in the African energy, oil, and gas market.

This is undoubtedly, an exceptional chance to participate in Angola’s most recent energy projects and network with the energy ministry, key oil and gas players, and counterparts from other African nations, including the African Development Bank, African Continental Trade platform players, and a number of others.

• Heads of States and Governments

“Whenever you are confronted with an opponent. Conquer him with love.”