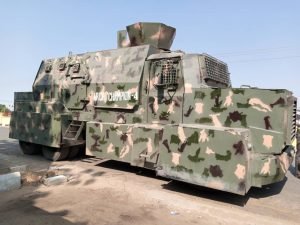 Maj.-Gen. Olusegun Adeniyi, the Theatre Commander OPLD, made the disclosure while briefing newsmen on Friday in Maiduguri.

Adeniyi disclosed that with the belief that money fights war, the Army Headquarters and Federal Government had provided the needed resources to enable them look inward.

He added that with the production and deployment of Ezugwu MRAP to the theatre of operation, the engineer corps decided to come up with the initiative to begin fabrication for production in Maiduguri.

According to him, the MRAPs are 100 per cent local content, saying it is only the glass that was produced in Kaduna.

Also speaking, Brig.-Gen. Babatunde Alaya, the Commander, 107 Division Equipment Support of OPLD, said that the traps were conceptualised and designed by the command to support the existing platforms.

Alaya explained that the idea was borne out of the desire to utilise the carcasses of the equipment that were destroyed at various theatre of operation.

He said that the MRAPs had been tested, deployed and being used in various fronts of counter insurgency operation.

“The idea was conceptualised by the commander because when he came in, we had a number of dead platforms either damaged by the Boko Haram Improvised Explosive Device (IEDs) or burnt during operations.

“So they littered the area as carcass, he then came up with the idea of how we could utilise the bodies that were on the ground.

“So we got some platforms such as man diesel, truck head, mark head and we combined them together to come up with MRAP.

“We have the body that we have tested at the range that could withstand 12.7 Anti Aircraft Ammunition and can also withstand Rocket Propel Grenada (RPG) blast.

“Of the champion, we have four and they have taken part in operations at Sambisa Forest and Gwoza and one is currently in Jakana but three were recalled for display.

“We are currently building another series called ‘Invincible’, we have built two and we are trying to acquire platforms for the remaining two.

“We also have the conqueror and the MRAPs you are seeing have been tested, deployed on the fields and used against the Boko Haram terrorists and they have proven to be good to go.

“We will continue to build on the local effort to make sure that we acquire platforms that we cannot get elsewhere,” he said.