Indigo, so much more than just a colour 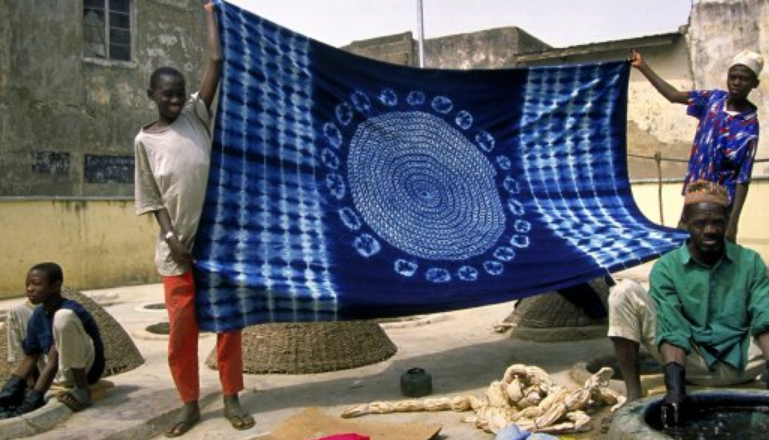 “The leaves are known for their antiseptic and anti-inflammatory properties. They can be consumed as an infusion or applied directly to a gaping wound,” he says.

Fofana is extremely knowledgeable about this raw plant material. The Malian artist and textile designer – who has exhibited his work in France, Mali and Japan – has dedicated his life to preserving these natural dyeing methods. “Today in Mali, you won’t see a single craftsman who works with indigo in an organic way, without cheating or using chemicals,” he says. “It’s an ecological and health disaster. Indigo is an overused word!”

This colour, which often features on the pages of interior decorating and fashion magazines, is said to date back to ancient Egypt. “This dye is used to decorate mummies’ coffins,” says the craftsman. “This is proof that indigo has endured. But what we mostly see today is synthetic dye,” says the craftsman, who is campaigning for a label of quality and excellence that will be used to differentiate real colours from fake ones.

Seven to 12 shades of blue

It takes seven to 10 years to master the art of creating natural indigo, which is based on a biochemical technique. “It is a bacterial vat dye, meaning that the indigo leaves ferment and form a breeding ground for living organisms [to] evolve in[to] an alkaline liquid,” says the specialist.

The method relies on air oxidation – the dyed fabric is then dried in the sun – and produces seven to 12 shades of blue. The dye is mostly applied to imported cotton, much to the dismay of Fofana, who prefers to grow organic cotton locally.

Traditionally, the textile is then woven from narrow strips onto horizontal looms that originate from the Sahelian zone, using the finimugu method (‘soft cloth’ in Bambara).

Indigo has appealed to various cultural groups in West Africa, including the Soninke – one of the first peoples to use it on the continent. “Legend has it that the Tuareg are its ambassadors, but the blue men of the desert never practised this technique. Simply put, they wore indigo chèches because this colour has an anti-UV function, it protects them from the sun,” says Fofana.

This textile tradition is representative of the Dogon country, which has an old adage that says “a man who does not wear clothes is a man without words,” says Koudiedji Sylla, creator of the indigo clothing brand Sarakule. Archaeological textiles have been found in the Bandiagara caves, some of which date from the 11th and 12th centuries. “On textiles such as these, one can observe patterns that have been created with indigo. They are made from dyes that are as fresh as if they [were] made yesterday,” says Fofana.

A symbol of protection

Indigo fabrics feature a rich collection of designs, which are mostly obtained using the knotting technique. Today, these patterns seem to have a strictly decorative function. “You can observe cowries on some fabrics,” says Sylla. “The technique of reserving by tying makes it possible to obtain shapes reminiscent of root pods or braids,” says Fofana.

Furthermore, the colour blue has a very special symbolism attached to it. In African tradition, this colour is a symbol of protection. “Newborns are often wrapped in an indigo cloth, a celestial colour that links the human and the divine. But this fabric also has a political dimension, as indigo was one of the commodities that made slave traders wealthy, along with cotton and tobacco. The history of indigo has a dark side, since it contributed to the deportation of Africans during the slave trade,” says the activist.