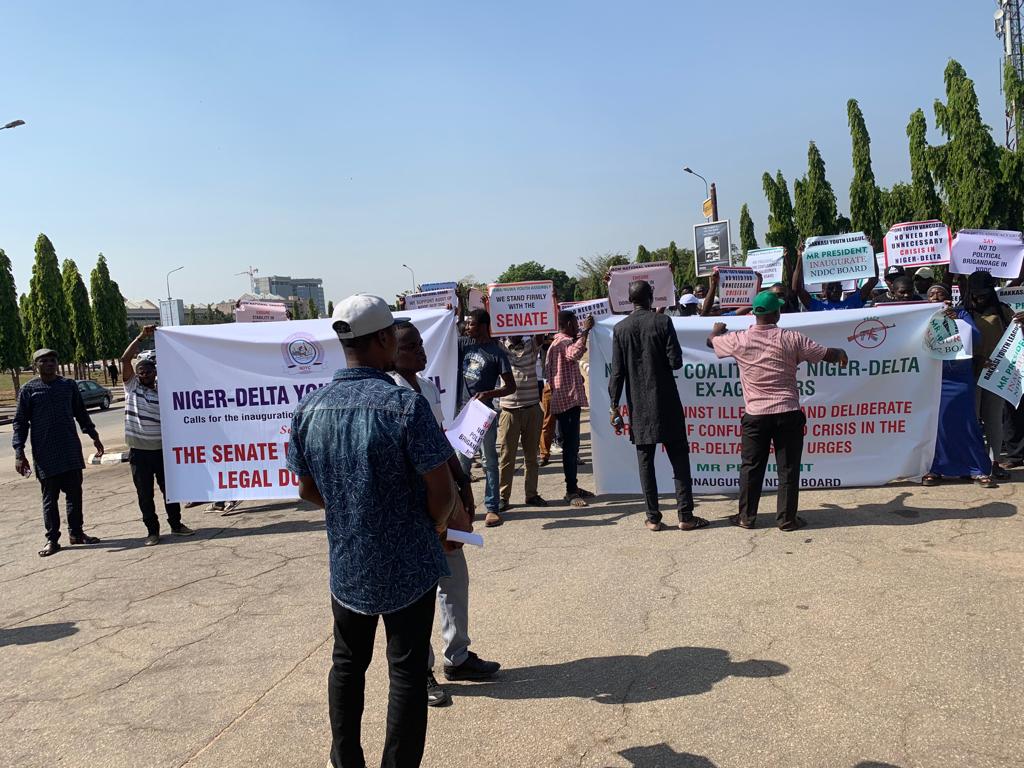 The call was made in Abuja on Monday during a protest led by the NDYC and National Coalition of Niger Delta Ex-agitators as well as Ijaw Youth Council (IYC).

The group urged the President not to be deterred by criticisms of the already screened Board of the NDDC saying it was the handiwork of enemies of the region orchestrated by youths outside the region.

They described the Interim Management Committee (IMC) of NDDC as illegal and an attempt to undermine the powers of the President to appoint the Board and also urged the Senate to discountenance the campaign of calumny against the Senate Committee Chairman on Niger Delta Sen. Peter Nwaoboshi.

“We in Niger-Delta region appreciate President Muhammadu Buhari for his sincerity in addressing the challenges in the region; we are not some paid groups who are not concerned if the Niger Delta is inflamed.

“We are true leaders in the Niger-Delta who have traceable addresses, names and antecedents; the protest on Friday Dec. 6 appeared to be about Sen. Peter Nwaoboshi.

“Without defending or condemning Sen. Nwaoboshi, the issue of inaugurating the screened board of the NDDC has nothing to do with whatever allegation against any Senator.

“This board was appointed by Mr President who found these compatriots worthy and Sen. Nwaoboshi’s committee agreeing with the views of the President cannot constitute any problem except the ones created by makers of this dangerous mischief.

“We stand with the decision of the Nigerian Senate to stand in defense of NDDC act.”

The group further expressed support for the forensic audit of the NDDC, but insisted that obeying the law by inaugurating the board would not obstruct the exercise.

They further urged the Senate not to succumb to cheap blackmail of mischief makers for the disbandment of its committee on Niger Delta.

“The Senate should not under any cheap blackmail criminalize any of its members on the basis of mere allegations.

“Those urging the Senate to dismantle its committee on Niger-Delta based on mere allegations should first advise their sponsors to resign due to the equally enormous allegations against them.

“The refusal to inaugurate the Board which has been screened is a straight call for anarchy and it should be averted.

“We therefore, call for peace in the Niger-Delta and urge the President to inaugurate the Board forthwith.”