In their words: US Supreme Court justices’ records on abortion | Courts News 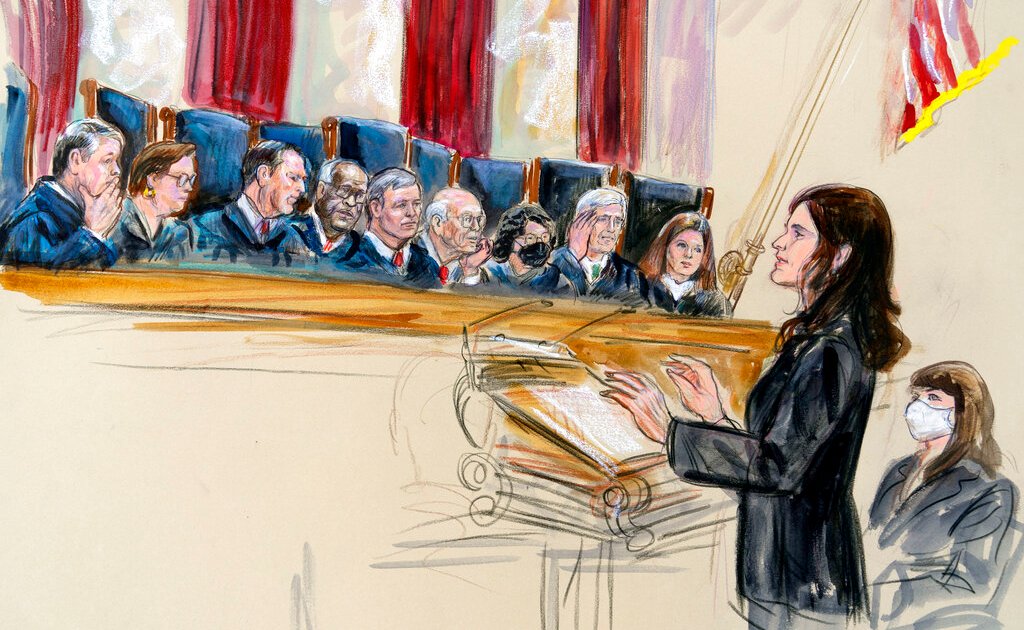 When the Supreme Court heard arguments in a major abortion case from Mississippi in December, it was clear to observers that there was substantial support among the court’s conservative majority for overruling two landmark decisions that established and reaffirmed a woman’s right to an abortion.

So when a draft of the opinion in the case written by Justice Samuel Alito was leaked late Monday, the potential outcome — the overruling of Roe v Wade and Planned Parenthood v Casey — was not the surprise. It was that the draft was leaked at all.

Even before arguments in the current case, however, the justices themselves have had a lot to say about abortion over the years — in opinions, votes, Senate confirmation testimony and elsewhere. One justice, Clarence Thomas, has openly called for overruling Roe and Casey.

A sampling of their comments:

Roberts has voted to uphold restrictions in two major abortion cases, in the majority in 2007 to uphold a ban on a method of abortion opponents call “partial-birth abortion” and in dissent in 2016 when the court struck down Texas restrictions on abortion clinics in a case called Whole Woman’s Health.

But when a virtually identical law from Louisiana came before the court in 2020, Roberts voted against it and wrote the opinion controlling the outcome of the case and striking down the Louisiana law. The chief justice said he continues to believe that the 2016 case “was wrongly decided” but that the question was “whether to adhere to it in deciding the present case”.

Roberts’ views on when to break with court precedent could determine how far he is willing to go in the Mississippi case currently before the court. At his 2005 confirmation hearing, he said overturning precedent “is a jolt to the legal system”, which depends in part on stability and even-handedness. Thinking that an earlier case was wrongly decided is not enough, he said. Overturning a case requires looking “at these other factors, like settled expectations, like the legitimacy of the Court, like whether a particular precedent is workable or not, whether a precedent has been eroded by subsequent developments”, Roberts said then.

In the same hearing, Roberts was asked to explain his presence on a legal brief filed by the George HW Bush administration that said Roe’s conclusion that there is a right to abortion has “no support in the text, structure, or history of the Constitution”. Roberts responded that the brief reflected the administration’s views.

Thomas voted to overturn Roe in 1992, in his first term on the court, when he was a dissenter in Planned Parenthood v. Casey. He has repeatedly called for Roe and Casey to be overturned since.

In 2000, he wrote in dissent when the court struck down Nebraska’s ban on “partial-birth abortion”.

Recounting the court’s decision in Roe, he wrote: “In 1973, this Court struck down an Act of the Texas Legislature that had been in effect since 1857, thereby rendering unconstitutional abortion statutes in dozens of States. As some of my colleagues on the Court, past and present, ably demonstrated, that decision was grievously wrong. Abortion is a unique act, in which a woman’s exercise of control over her own body ends, depending on one’s view, human life or potential human life. Nothing in our Federal Constitution deprives the people of this country of the right to determine whether the consequences of abortion to the fetus and to society outweigh the burden of an unwanted pregnancy on the mother. Although a State may permit abortion, nothing in the Constitution dictates that a State must do so.”

Breyer has been the lead author of two court majorities in defence of abortion rights, in 2000 and 2016. He has never voted to sustain an abortion restriction, but he has acknowledged the controversy over abortion.

Millions of Americans believe “that an abortion is akin to causing the death of an innocent child”, while millions of others “fear that a law that forbids abortion would condemn many American women to lives that lack dignity”, he wrote in the Nebraska case 21 years ago, calling those views “virtually irreconcilable”. Still, Breyer wrote, because the Constitution guarantees “fundamental individual liberty” and must govern even when there are strong divisions in the country, “this Court, in the course of a generation, has determined and then redetermined that the Constitution offers basic protection to the woman’s right to choose.”

Alito has a long track record of votes and writings opposing abortion rights, as a jurist and, earlier, a government lawyer.

Alito has voted to uphold every abortion law the court has considered since his 2006 confirmation, joining a majority to uphold the federal “partial-birth” abortion law, and dissenting in the 2016 and 2020 cases.

As a federal appeals court judge, he voted to uphold a series of Pennsylvania abortion restrictions, including requiring a woman to notify her spouse before obtaining an abortion. The Supreme Court ultimately struck down the notification rule in Casey and reaffirmed the abortion right in 1992 by a 5-4 vote.

Working for the Reagan administration in 1985, Alito wrote in a memo that the government should say publicly in a pending abortion case “that we disagree with Roe v. Wade”. About the same time, applying for a promotion, Alito noted he was “particularly proud” of his work arguing “that the Constitution does not protect a right to an abortion”.

Sotomayor joined the court in 2009 with virtually no record on abortion issues but has voted repeatedly in favour of abortion rights since then. Recently, when the court allowed Texas’ restrictive abortion law to take effect, Sotomayor accused her colleagues of burying “their heads in the sand”. She was in the majority in the Texas and Louisiana abortion clinic cases.

Sotomayor’s displeasure with the court’s recent Texas ruling was evident at a virtual appearance she made. “I can’t change Texas’ law, but you can,” she said.

Kagan also has repeatedly voted in favour of abortion rights in more than 11 years as a justice. She is also arguably the most consistent voice on the court arguing for the importance of adhering to precedents and can be expected to try to persuade her colleagues not to jettison constitutional protections for abortion.

Kagan was in the majority when the court struck down the Texas and Louisiana restrictions on abortion clinics. More recently, Kagan called Texas’ new abortion law “patently unconstitutional” and a “clear, and indeed undisputed, conflict with Roe and Casey”.

Kagan had already grappled with the issue of abortion before becoming a justice. While working in the Clinton White House she was the co-author of a memo that urged the president for political reasons to support a late-term abortion ban proposed by Republicans in Congress, so long as it contained an exception for the health of the woman. Ultimately, President George W Bush signed a similar late-term abortion ban without a health exception. The Supreme Court upheld it.

Gorsuch has perhaps the shortest record on abortion among the nine justices. He was in the majority allowing Texas’ restrictive abortion law to take effect. In dissent in 2020, he would have upheld Louisiana’s abortion clinic restrictions.

As an appeals court judge before joining the Supreme Court in 2017, Gorsuch dissented when his colleagues declined to reconsider a ruling that blocked then-Utah Governor Gary Herbert from cutting off funding for the state branch of Planned Parenthood. But Gorsuch insisted at his Senate confirmation hearing that he was concerned about procedural issues, not the subject matter. “I do not care if the case is about abortion or widgets or anything else,” he said.

Kavanaugh’s name was added to President Donald Trump’s shortlist of Supreme Court candidates shortly after he sided with the administration in a 2017 case involving abortion. Trump chose him for the court the following year. As a justice, Kavanaugh dissented from the Louisiana decision and voted to allow the new Texas law to take effect, though he has taken a less absolutist stance than some of his conservative colleagues. In the Louisiana case, for example, Kavanaugh wrote that more information was needed about how the state’s restrictions on clinics would affect doctors who provide abortions and seemed to suggest his vote could change knowing that information.

Kavanaugh’s most extensive writing on abortion came while he was a judge on the federal appeals court in Washington. The Trump administration had appealed a lower court ruling ordering it to allow a pregnant 17-year-old immigrant in its custody to get an abortion. The administration’s policy was to decline to help those minors get abortions while in custody.

Kavanaugh was on a three-judge panel that postponed the abortion, arguing that officials should be given a limited window to transfer the minor out of government custody to the care of a sponsor. She could then obtain an abortion without the government’s assistance. The full appeals court later reversed the decision, and the teenager obtained an abortion. Kavanaugh called that decision out-of-step with the “many majority opinions of the Supreme Court that have repeatedly upheld reasonable regulations that do not impose an undue burden on the abortion right recognized by the Supreme Court in Roe v. Wade”.

Kavanaugh was criticized by some conservatives for not going as far as a colleague, Judge Karen Henderson, who stated unambiguously that an immigrant in the US illegally has no right to an abortion. At his appeals court confirmation hearing, Kavanaugh dodged questions on his own personal beliefs on Roe v Wade.

Kavanaugh voted to allow the Texas law to go into effect in September, but during oral arguments earlier this month he appeared to have doubts about its novel structure and whether it would lead to a spate of copycat laws on abortion and other rights protected by the Constitution.

Barrett’s one public vote on the Supreme Court concerning abortion was to allow the Texas “fetal heartbeat” law to take effect. She also cast two votes as an appeals court judge to reconsider rulings that blocked Indiana abortion restrictions.

In 2016, shortly before the election that would put Trump in office, she commented about how she thought abortion law might change if Trump had the chance to appoint justices. “I … don’t think the core case – Roe’s core holding that, you know, women have a right to an abortion – I don’t think that would change,” said Barrett, then a Notre Dame law professor. She said limits on what she called “very late-term abortions” and restrictions on abortion clinics would be more likely to be upheld.

Barrett has a long record of personal opposition to abortion rights, co-authoring a 1998 law review article that said abortion is “always immoral”. At her 2017 hearing to be an appeals court judge, Barrett said in written testimony, “If I am confirmed, my views on this or any other question will have no bearing on the discharge of my duties as a judge.”

Although Barrett allowed the Texas law to take effect, she joined Kavanaugh during oral arguments in raising sceptical questions about its structure, asking about provisions of the law that force providers to fight lawsuits one by one and, she said, do not allow their constitutional rights to be “fully aired”.