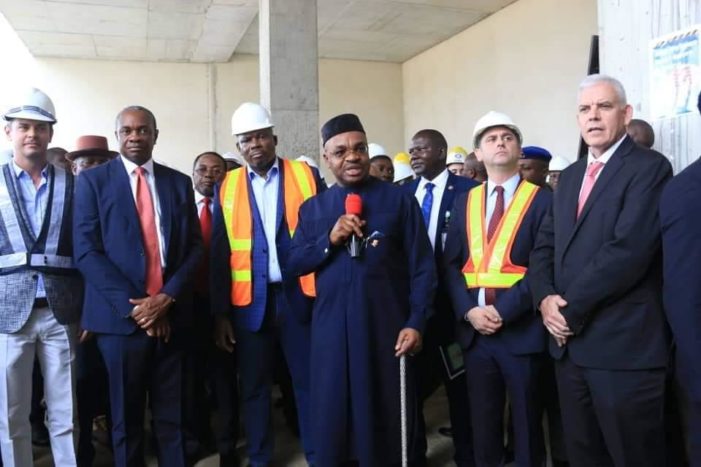 This is even as he expressed optimism that the planned partnership with the IOCs to tap the gas that was hitherto flared wold come to fruition soon and create over 5,000 jobs.

Speaking at the meeting with IOCs led by the Lead Country Manager, Mobil Producing Nigeria (MPN) Mr. Paul McGrath, Gov. Emmanuel appreciated the companies for accepting to partner the State.

He assured that the enabling environment would be created in the state for he IOCs, while reiterating that his administration’s determination to create job opportunities through industrialisation which he noted was only possible when investments thrive.

The Governor explained that the state had taken steps to build the necessary gateways for investors and appealed to the Federal Government to assist in the realisation of its vision.

“We appeal to the Federal Government to give us enough support for the investors that are coming in because people that will work here are not only Akwa Ibom people.

“The day we start the Ibom Deep Seaport project at least 5000 people will be on board handling different jobs, skills will be transferred and training will be offered.

“We will develop capacity and the rest of the things will come up so the chain effect of that positive impact is what we cannot overlooked, he stated.

Justifying the partnership with Vitol, the Governor explained that the company would partner others ” to stop gas flaring then channel the power to Liquefied Petroleum Gas (LPG) and other uses”, explaining that ” we cannot have gas then complain in this country”.

The Governor who embarked on inspection of the 21 Storey Intelligent building shortly after the meeting, said the building has been a demonstration of government’s commitment to partner with the Corporate Organisations in the provision of conducive working environment, adding that residence for staff will be added.

Earlier, the Chairman and Lead Country Manager, Mobil Producing Nigeria, Mr. Paul McGrath, thanked the Governor for the opportunity given the company to partner in the development of the state .

Also, the African Head, Vitol, Mr Pierre Barbe, said their major focus in their investment in Nigeria is to end gas flaring and sanitise the ecosystem, saying that the initiative will make gas available for power generation and production of LPG for domestic consumption.

On his part, the President BlackRhino, Brian Hertily, assured that when the necessary modalities are put in place for conversion of gas into energy the state will attract more industries for job creation.