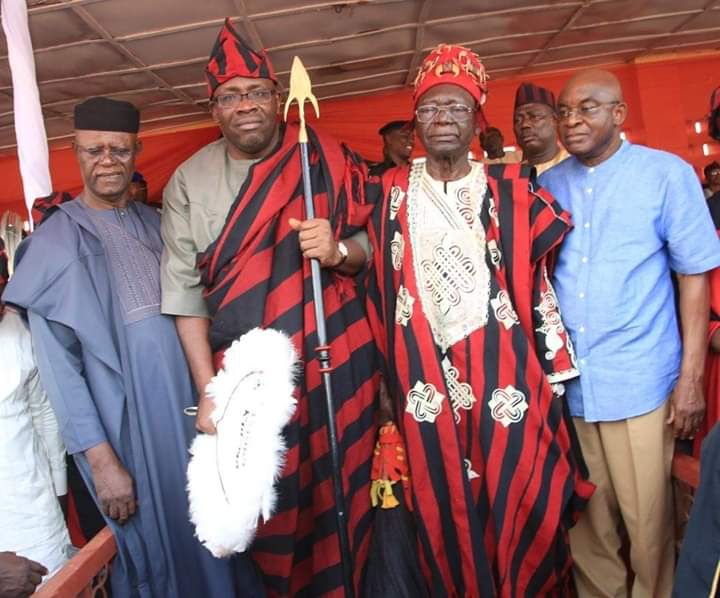 ……..Says title a ‘handshake across the Niger’

Gov. Seriake Dickson of Bayelsa has been conferred with an Idoma traditional title, ‘Oyi’Ihotu K’ Idoma’ (the cherished son of Idoma land) in Otukpo, Benue State.

According to a statement issued by the Secretary, Idoma Area Traditional Council, Mr Joseph Adah, the governor described the award as a ‘handshake across the Niger’.

The Paramount ruler of Idoma kingdom, Och’Idoma IV, Dr Elias Obekpa, while conferring the title on Dickson at the Och’Idoma Square, said that the honour was in appreciation of his kind gestures toward the Idoma people.

The governor, who hails from the Izon Kingdom, was also adopted as proud son of Idoma kingdom by the Idoma Area Traditional Council.

“It is to demonstrate our appreciation for the cordial relationship that has existed between our people and the people of Bayelsa state,” he said.

He added that the governor also appointed Mr Steven Ekoja, another Idoma man as his Special Assistant.

He also appointed an Idoma man, Innocent Adaji as his Chief Driver and Mr John Adaji as his Farm Manager while some of his cooks are of Idoma and Tiv extractions.

The paramount ruler lauded Agbo for keeping him informed about the goodwill shown to his Idoma subjects by Dickson.

He enjoined his sons and daughters outside Idoma land to always draw the attention of the palace to similar gestures.

He also used the occasion to call on well-meaning individuals and organisations to invest in Idoma land, assuring that the Palace would not hesitate to honour others who have shown kindness to his subjects.

Responding, Dickson applauded the Och’Idoma and all sons and daughters of Idoma land for the honour done him and the Bayelsa people.

The governor who also stressed the need for more handshake across the tribal divides in the country, advocated for unity among people in different areas of the county.

“We need more handshakes across the Niger. I therefore urge all of us to close ranks in this country. This award will strengthen the bond between the Ijaw and Idoma ethnic nationalities.

“Your son, my friend, the Hon. Francis Ottah Agbo has a dual identity of being Ijaw and Idoma and has done well at the National Assembly, and I thank you all for supporting him,’’ Dickson said.

On his part, Agbo who facilitated the award said he did so to prove to the world that the Idoma people are grateful people who would always appreciate every kind gesture extended to them. (NAN)