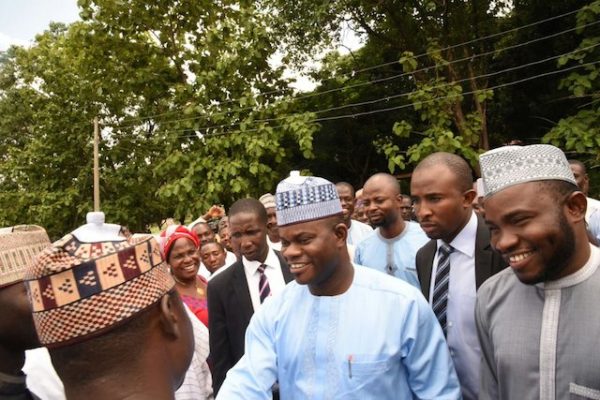 The projects are situated across the three senatorial districts of the state.

He also performed a foundation laying ceremony of a Skills Acquisition centre at Okene Community Secondary School (OCSS) in Anyava.

Represented by Director General, Government House Administration, Alhaji Shaibu Oricha, the governor lauded the partnership between the world bank and the State Government, valued at N500 million to provide basic social amenities to poor rural communities across the state.

”We started with commissioning of the clinic; the importance of health cannot be overemphasied because health is wealth, and you need to provide health facility for human being to exist, so that we can have a healthy environment.

”The second is water, these are two important social and basic amenities that are key to human existence.

”We are also doing ground- breaking of a Skills Acquisition Centre as a way of empowering the people of this area.

”If you are not healthy you cannot acquire skills, you cannot also exist without water, which we have just done.

”Any reasonable government should look into these key areas after providing security, the next thing to provide is social amenities, water and health,” he said.

Bello advised the communities to protect, maintain and sustain those facilities for their own benefits, while commending the CSDA for a job well done in mainstreaming the partnership in line with the New Direction blueprint.

The General Manager of CSDA, Mallam Dauda Momoh, said the agency was saddled with the responsibility of bringing the basic social amenities closer to the poor in the rural communities.

”The project is a World Bank Assisted Project, but not all states are benefiting from it. Kogi is one of the pioneering states because our governor showed interest in it.

”So far, this year alone, we have spent over N500 million in communities with over 100 micro- projects completed across seven focal local government areas and ready for commissioning,” Momoh said.

He said  the 2019 benefiting focal local government areas are: Okene, Okehi, Ajaokuta, Olamaboro, Ibaji, Ijumu and Kogi/Kotonkarfe, while Yagba West,  Kabba/Bunu, Adavi and Dekina had been added for 2020.

He said that the CSDA had at least two micro projects in every community with the amount not exceeding N10 million, disclosing the community contributed 10 per cent while the agency paid the remaining 90 per cent of the total project cost.

”The micro projects in Anyava and Agassa Uvette communities cost about N9.72 million. The projects are community-driven development after following the due process,”Momoh said.

In his goodwill message, Alhaji Aliyu Sadiq, the Odogidi of Ehebe, Okene, who spoke on behalf of the communities, commended the world bank and the State Government for the partnership, which, he said, would  have tremendous  impact on the lives of their people.