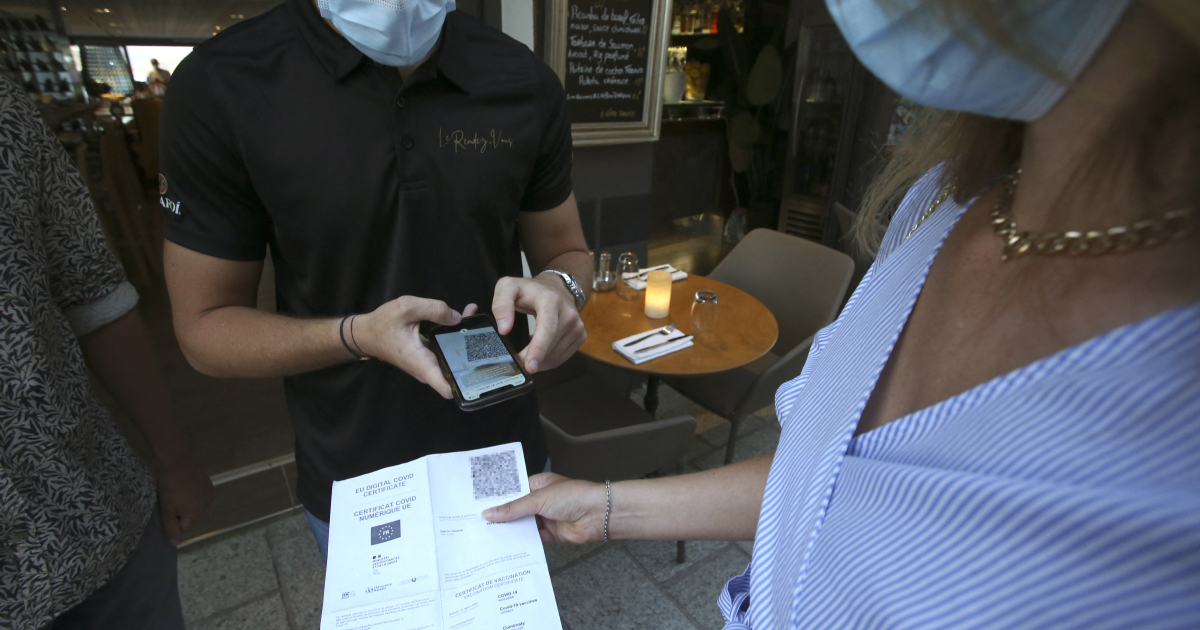 France’s parliament has approved legislation to make COVID passes a key part of daily life and vaccinations mandatory for health workers amid a surge in infections across the country.

Monday’s move means people visiting restaurants and other public venues, or those undertaking domestic travel on trains and aeroplanes, will be required to show proof of vaccination, a negative test, or recent recovery from the coronavirus.

It initially applies to all adults, but will apply to everyone 12 and older from September 30.

Paper or digital documents will be accepted and the new legislation says a government decree will outline how to handle vaccination documents from other countries.

All workers in the healthcare sector will also be required to start getting vaccinated by September 15, or risk suspension.

On Saturday, more than 160,000 people took part in protests held in several cities nationwide on Saturday against the government’s plans.

Critics say the new legislation infringes on the freedoms of those who do not want to be vaccinated against COVID-19.

But President Emmanuel Macron’s government has argued the rules are needed to protect vulnerable populations and hospitals as a fourth wave of COVID-19 infections grips France, as well as to avoid fresh lockdowns.

Last week, Macron ordered that the health pass would be required to visit cinemas, nightclubs, museums and other cultural venues.

The move came as his government sought to tackle a rising COVID caseload, fuelled by the spread of the highly infectious Delta variant, first detected in India.

The rules were implemented by decree, but legislators were required to vote on their extension to cover other settings.

They worked through the night and the weekend to reach a compromise version approved by the Senate on Sunday night and by the National Assembly after midnight.

The rules can now be applied until November 15, depending on the virus situation.

Separately on Monday, Macron announced that the number of people in France who have received at least one dose of COVID-19 vaccine has crossed the 40-million mark.

After four million people received vaccines over the past two weeks, some 60 percent of the population are now partly or fully vaccinated, Macron tweeted during an official visit to French Polynesia.

Macron had earlier lashed out at those fuelling anti-vaccine sentiment and protests in France.

“What is your freedom worth if you say to me ‘I don’t want to be vaccinated’ but tomorrow you infect your father, your mother or myself?” he said during a visit to a hospital in French Polynesia.

While he said protesters are “free to express themselves in a calm and respectful manner”, he warned demonstrations would not end the pandemic.

He also criticised “people who are in the business of irrational, sometimes cynical, manipulative mobilisation” against vaccination.

Macron’s remarks came after France recorded almost 23,000 new COVID-19 cases on Saturday, twice as many as the previous week.

The country’s death toll from the pandemic now stands at more than 111,000 people.

But the number of intensive care cases has dropped dramatically from its peak in April, with the government crediting the improvement to the accelerating vaccination rollout.