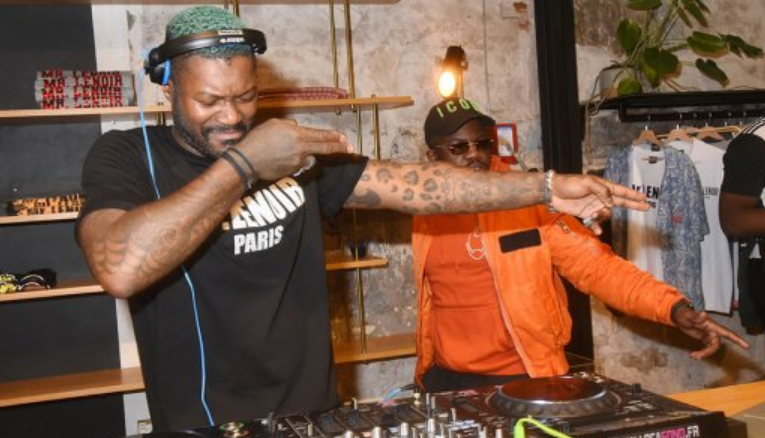 Djibril Cissé, a national striker, had not set foot in the country of his father – Mangué Cissé, a former Ivorian international – for more than 10 years. In 2009, he came to bury the man who had played for the Éléphants in the 1960s and 1970s. “I am back in my homeland today under better circumstances, as part of a festive event. It was time for me to return home,” says Cissé.

Cissé can often be found sporting a colourful patterned shirt with matching Bermuda shorts. He also has visible tattoos on his arms and surprisingly blonde hair.

The man who has long made experimenting with his hair as part of his signature style is a lot like Virgil Abloh, an American-Ghanaian designer. Like Abloh, he has launched his own streetwear brand, Mr. Lenoir, which he hopes to distribute in Africa soon and also works the turntables at parties and electro festivals.

For the time being, this self-assured trendsetter, who has over a million followers on Instagram, is happy to perform for Babi’s trend-setting generation at Sunday, one of the city’s hottest music events.

“I’m coming to Abidjan to introduce myself to the public as well as to local artists with whom I plan to collaborate and prepare tracks [with],” said the former footballer, who has already worked with Nigerian artist Niniola on a ‘featuring’ that caught the attention of Diplo’s Higher Ground label, one of the industry’s most influential electro music producers.

I would like to give back to football what it has given me by sharing advice on my game and technique.

His ‘mixed fusion’, which consists of Afro-house mixed with Brazilian bailé funk and even cumbia, is free of the coupé-décalé that is dominating the local music landscape. But his sound ended up being a huge hit in West Africa, where Cissé got carried away by the crowd.

“I rarely give up”

“I started mixing [music] at 14 after I discovered a DJ in a club near my home in the south of France,” he says. However, it remained a hobby until 2015, when the former professional sportsman announced his retirement. Now almost 40, Cissé intends to launch his music career by kicking off sets at the National Institute of Youth and Sport’s football stadium in Abidjan.

The circle is complete for Cissé whose stage name ‘Tcheba’ means ‘strong man’ in Dioula. He owes this nickname to his mother and aunt and even had it engraved on his skin. “I have great strength of character, I rarely, if ever, give up. I have had two major injuries that could have ended my career, I know players who would have stopped for less,” he says.

Although he doesn’t have a clear plan in mind yet, Cissé also hopes to pass on his footballing experience to young local players, as some of his fellow high-level sportsmen from the diaspora have already done.

“I would like to give back to football what it has given me by sharing advice on my game and technique,” says this Jean-Pierre Papin fan. “For that to happen, the Ivorian national authorities and clubs would have to want to collaborate with me,” he says.