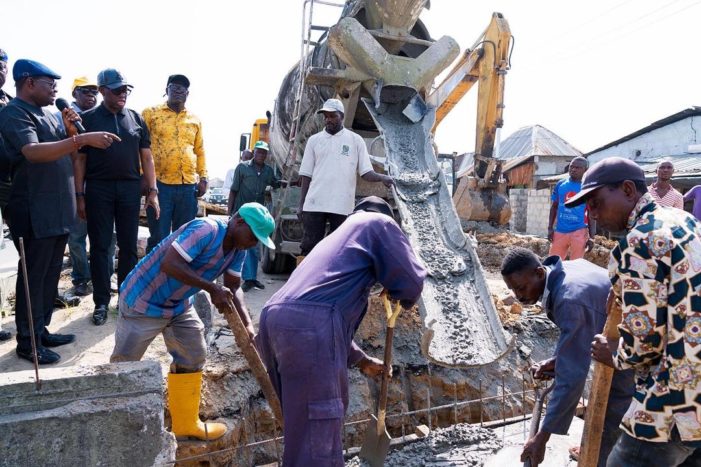 He said that contract for two of the projects had been awarded to CCECC Ltd and Levante Construction Ltd.

The governor stated this on Monday while fielding questions from newsmen in Warri after inspecting some ongoing projects being executed by the state government in Warri South, Uvwie and Udu Local Government Areas.

He said that special attention was being given to drainage challenges in the area because of the flooding posed by the terrain.

He assured that his administration would continue to prioritise resources in order to provide necessary infrastructure for the people.

Okowa expressed appreciation to people in the area for coming out in large number to welcome his entourage.

According to him, the large turnout is an affirmation of the satisfaction derived from the projects being executed.

“We are in the Warri area inspecting roads; it is an effort to ensure that we put contractors on their toes.

“There are lots of more roads that are ongoing and if we find time before the Christmas, we will go out for more inspection, otherwise from January we will go out more to inspect more roads to ensure that our roads are properly done and that contractors are actually meeting up with specifications that we have requested them to meet.

“We are managing our resources and that is why we are giving special attention to drainage projects in Warri and Uvwie area because they have a huge flooding problem.

“Whatever was done in the past was not just good enough considering the terrain in the area.

“We have been able to carry out proper studies and we will embark on six storm drainage projects estimated at about N18 billion.

“We have awarded two out of the six projects, to CCECC and Levant Construction Limited who won the bid, according to the State Tender Board.

“These two projects will be costing us about N9.5 billion and that essentially will drain a major part of Warri and Uvwie when completed,” he said.

“It may not follow in the same manner like that of Asaba because we are going to use ‘Mat Concrete’ because of the terrain.

“We will tackle the drainage problem to ensure that at the end of this tenure we will be able to beat our chest that we have done something good for Warri people,” he said, adding “once we have solved the drainage challenges, it becomes much easier to construct more roads.”

He added that beyond the drainage projects, “we have other road projects we are embarking on in Warri and environs.

“The Ifiebor Street road in Warri is one out of the 10 roads we have awarded in that area. We also have a secondary school building we are constructing for the Okere-Urhobo people.”

Okowa, who was conducted round the projects by the Commissioner for Works, Chief James Augoye, inspected the construction of concrete paved Dimony Street at Okumagba Layout in Warri; ongoing construction of Ifiebor Street with side drains as well as construction of classroom blocks at Okere-Urhobo Secondary School, Warri.