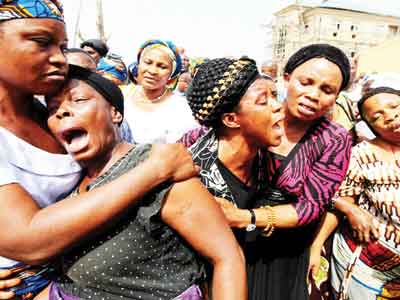 The World Health Organization (WHO) boss, Dr Tedros Ghebreyesus, has revealed he is unable to send money to his “starving” relatives in Ethiopia’s war-torn Tigray region.

“I don’t know even who is dead or who is alive,” he continued.

Since the war began in 2020, the region has been cut off from the outside world, with no electricity or phones.

The internet and banking services are also unavailable.

Ethiopia’s government has been accused of imposing an aid blockade on the region which impeded crucial deliveries – something it blamed on the fighting.

Tens of thousands of civilians have died and millions are in urgent need of food aid. The World Food Programme says that almost half of Tigray’s 5.5m population are in “severe” need of food.

Fighting resumed this week after months of calm following a truce agreed in March between Tigrayan forces and the Ethiopian government to allow aid to get through.

It is not the first time Dr Tedros, a former Ethiopian health minister, has spoken about the war. On Wednesday he said the situation was worse than that in Ukraine and suggested that racism was behind the difference in the global response.

“Maybe the reason is the colour of the skin of the people in Tigray,” he said.

In 2020 he denied an Ethiopian general’s accusations that he had helped procure weapons for the Tigray rebels. “There have been reports suggesting I am taking sides in this situation. This is not true,” he tweeted at the time.

Other Tigrayans have had the same difficulties as Dr Tedros in contacting their relatives.

An economist and researcher who lives abroad, Kibrom Abay, said sending money to Tigray was extremely difficult and costly because of the suspension of financial services in the region.

“The fact that I cannot help my starving parents, who used to rely on remittances from me, is extremely painful,” he said.

One person living in Ethiopia’s capital, Addis Ababa, told the BBC they had found someone who would deliver money to Tigray for a 20% commission.

“The plan was to get it to them in a week. It has been more than a month and my family could not receive it… I don’t know about their current status. I could not get in touch with them.”

Others cannot even find brokers to send money to their families because of the lack of transport.

These middlemen sometimes charge around 40%, or even more, to travel to Tigray and bordering areas on foot to hand-deliver money. One of them recently told the BBC their work was done based on “trust”. Some have also used the same methods to send essential medicines.

Fighting is reported to be continuing on Friday, with Tigrayan forces saying the government had conducted air strikes in the region’s capital, Mekelle.

The chief clinical director at Mekelle’s main hospital, Kibrom Gebreselassie, told the BBC’s Newshour programme four people had been killed during air strikes on the city – two of whom were children playing in a playground. Nine others were also injured in the attacks, he said.

The Tigray People’s Liberation Front (TPLF) blames the Ethiopian army for the outbreak of fighting, while the government blames the Tigrayans.

A statement released by the government’s communications office urged people in Tigray to stay away from “areas where TPLF’s military equipment and training facilities are located”. The statement did not address the accusation of air strikes but it seemed to suggest aerial attacks were imminent.

TPLF spokesperson Getachew Reda told the BBC’s Newsday programme that heavy fighting was still going on and that the people of Tigray were suffering.

“It would be foolhardy for us to start a war when in actual fact our people are in need of humanitarian aid.”

Residents of Kobo, a city approximately 25km (15 miles) from some of the reported fighting, told the BBC they could still hear the sound of heavy weapons.

“The community is confused and some are fleeing to the nearby city. But most of them are alongside the federal defence force and the Amhara special force to face what is coming,” a man said.

The Tigray war broke out in Ethiopia’s northernmost region in November 2020 – later spreading south to the Amhara and Afar regions.

Thousands were killed, over two million people fled their homes and some 700,000 people were left living in “famine-like conditions”, US officials said.