Ethiopia: DW Fact Check – Tigray Conflict Is Also a Battle for the Truth 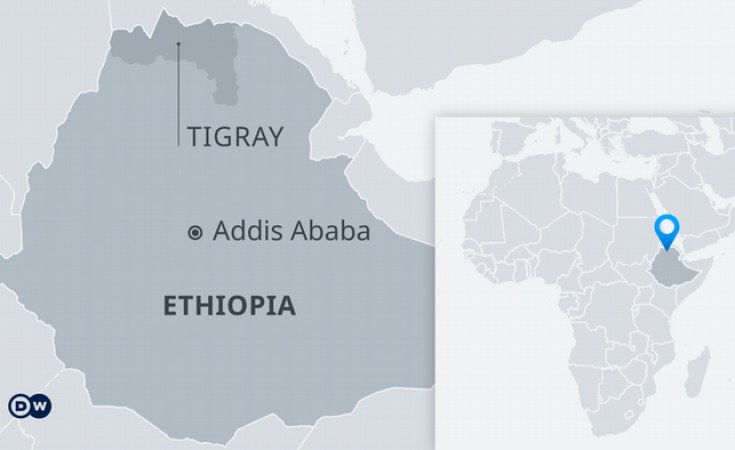 A map showing the Tigray region of Ethiopia.

The situation in Ethiopia’s Tigray region remains opaque making it difficult to separate fact from fiction — not least due to a media blackout. DW takes a look at some of the claims.

1. Do these images show coffins of soldiers killed in the clashes?

There are numerous photos making the rounds purporting to show victims of the clashes between Tigray People’s Liberation Front (TPLF) forces and the Ethiopian military.

False. A reverse image search shows that the picture actually depicts the victims of a suicide bombing in northern Mali in 2017 in which 77 people were killed.

The image also appeared in a news article from 2019. This suggests that the image has been making the rounds online well before the conflict in Ethiopia began last month.

2. Does the TPLF have 250,000 professionally trained troops?

False. This figure has been making the rounds in various media/social media outlets.

The AFP news agency, for example, wrote on November 10: “Given Tigray has powerful military forces, with an estimated 250,000 troops, a war could be lengthy and bloody.”

Radio France24 writes: “The TPLF has considerable military assets and an estimated 250,000 troops fighting on mountainous terrain they know well.”

This statistic is probably the conflation of figures used in a widely shared briefing by the International Crisis Group (ICG), a Brussels-based think tank, made available on November 4.

“Tigray has a large paramilitary force and a well-drilled local militia, thought to number perhaps 250,000 troops combined,” the briefing says.

A Google search for the period before November 4 fails to return results mentioning 250,000 paramilitary, militia, troops or forces in Tigray, reinforcing the idea that the statistic came from the International Crisis Group.

The ICG briefing emphasizes that the 250,000 figure includes local or village militias, as opposed to professionally trained troops.

An ICG spokesperson, who wished to remain anonymous, told DW that “the figure is an upper estimate from Tigrayan officials and includes not just regional security forces but also all members of community defense militia operating across Tigray at the local level.”

Cameron Hudson, a senior fellow with theAfrica Center at the Atlantic Council and a former CIA and State Department official, thinks the figure is overstated. “We just don’t know how many irregular forces who were called up are still fighting and how many have laid down arms and tried to blend back into society. My suspicion is that the number of actual fighters is actually quite low — in the tens of thousands. How else could they have all escaped [the regional capital] Mekele without being seen?” he told DW.

3. How many and what kind of weapons are in the hands of the TPLF?

According to claims by pro-TPLF activists, the regional force has 350 tanks, 300 rocket launchers, 580 cannons, and 1,000 anti-aircraft missiles.

This is a translation of the claims made in the post:

2. “Rocket launchers – 300 in number; You can shoot up to 30 rockets at a time. They will be used to destroy enemy strongholds.”

5. “Small missile (PCL 191) – The number I mentioned at another time; Those Chinese routes can travel up to 536 kilometers. These devices are 98.9% accurate because they are automatic. If all eight were to land in Addis Ababa at once, they will completely destroy Addis Ababa and its environs.”

6. “Medium and advanced missiles – I’ll tell you about them after the victory.”

“And it’s almost like you don’t think the war has started. The invasion of the invaders.”

Misleading. The US provided Ethiopia with weapons during the “period the TPLF were in charge as part of the Ethiopian People’s Democratic Front coalition,” says the Atlantic Council’s Hudson. Some of those US-made weapons may well be in the hands of the TPLF, but the numbers are likely to be exaggerated. “I suspect that some of those numbers are overblown. Especially now that TPLF had to abandon Mekele, it is hard to imagine they were able to take all their materiel with them in retreat,” said Hudson.

According to a  Reuters news story , quoting  Janes , “Tigray had several S-75 and S-125 surface-to-air missile systems, primarily used for air defense, before fighting broke out.”