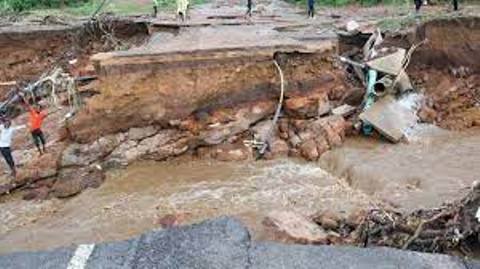 This was confirmed on Thursday by Shami Harichunder, corporate stakeholder manager at Umgeni Water.

Story continues below Advertisment
A message was put out on Wednesday by the DA’s Heinz de Boer, claiming that he had information that an aqueduct supplying water to Durban was damaged during the flooding.

Harichunder confirmed the breakages, saying that two aqueducts which supply raw water to the Durban Heights Water Treatment Works, broke during rock falls in the vicinity of Molweni, Inanda.

The aqueducts were then taken out because of the risk they pose, he explained.

These two aqueducts are among the four that supply water from Nagle Dam in Cato Ridge area, to the Durban Heights Water Treatment Plant for processing.

This means that the facility is treating a reduced amount of water than it usually does.

The water being treated at this plant is supplied to eThekwini Water and Sanitation who then sell it to consumers in north, south, central and inner west regions in Durban.

“The current potable water shortfall means that eThekwini Water and Sanitation is unable to meet the full requirements of consumers. Until the aqueducts are repaired and brought back into full functionality, a deficit in raw water supply will prevail.

“Similarly, reduced supply of bulk potable water will continue to prevail. The impact on consumers will be experienced in erratic supply, interruptions in supply or low pressure in taps,” Harichunder said.

The damage were reported to Umgeni Water on Wednesday after an inspection was conducted using a helicopter because roads were inaccessible.

Story continues below Advertisment
Harichunder said the full extent of damage was not fully accounted for as yet, as clean-up operations are still under way.

“Based on the outcomes of the investigation, a clear picture will emerge of the magnitude of damage, what needs to be done to restore full functionality and how long this process is expected to take,” he said.

A report by IOL yesterday confirmed various wards around the city had water outages.

Story continues below Advertisment
On Wednesday, eThekwini Municipality issued an alert informing residents that there had been damages to the water treatment facility and should expect disruptions in supply.

“Most areas in eThekwini will experience shortage of water supply, with several areas already affected. Technicians are undertaking repairs as speedily as possible,” the city said.

Reports of water outages by affected residents have been flooding social media, with some people saying they have been without water for around three days.