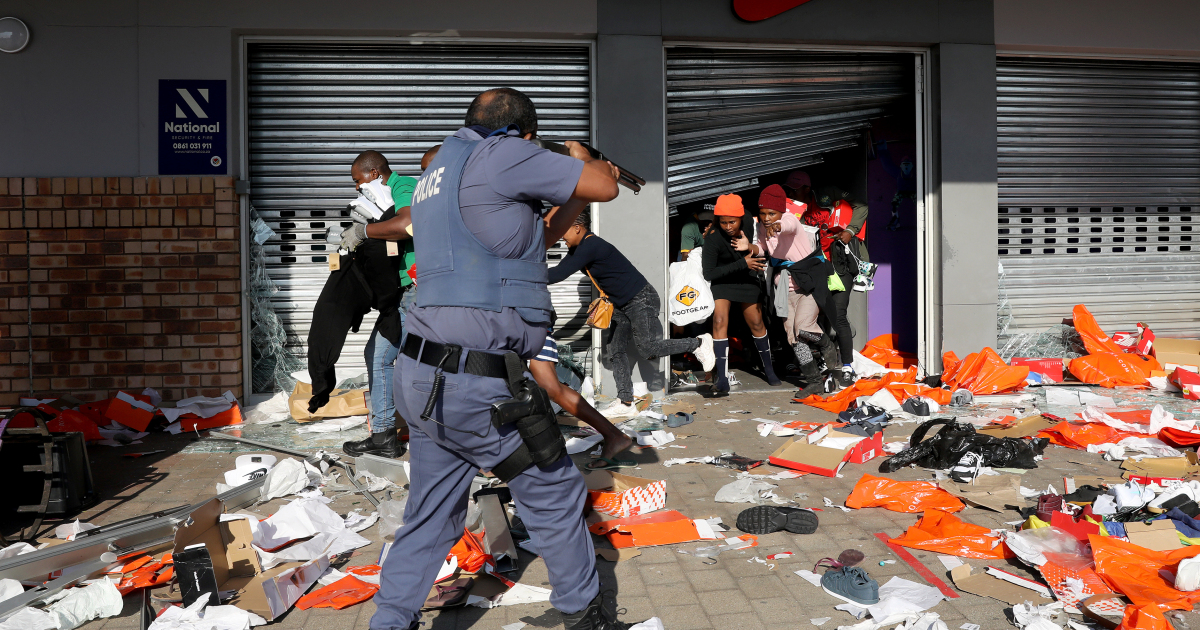 Protesters clashed with security forces in several areas of South Africa and looters ransacked shopping malls on Tuesday as frustrations over poverty and inequality boiled over in to the country’s worst unrest in years, with the death toll rising to more than 30.

Many of the deaths occurred in chaotic stampedes as scores of people looted food, electrical appliances, liquor and clothing from retail centres, KwaZulu-Natal province premier Sihle Zikalala told the press on Tuesday morning.

“Yesterday’s events brought a lot of sadness. The number of people who have died in KwaZulu-Natal alone stands at 26. Many of them died from being trampled on during a stampede while people were looting items,” said Zikalala.

The bodies of 10 people were found on Monday evening after a stampede at a Soweto shopping mall as looting continued in Gauteng province, premier David Makhura said on Tuesday.

Security officials said the government was working to ensure the violence and looting did not spread further, but they stopped short of declaring a state of emergency.

“No amount of unhappiness or personal circumstances from our people gives the right to anyone to loot, vandalise and do as they please and break the law,” Police Minister Bheki Cele told a news conference.

The violence was triggered by the jailing of former president Jacob Zuma as his supporters took to the streets last week, but the situation has evolved into an outpouring of anger over persistent poverty and inequality in South Africa 27 years after the end of apartheid.

The economic effects of COVID-19 restrictions have exacerbated the problems.

President Cyril Ramaphosa announced late on Monday that he was dispatching troops to help overwhelmed police halt the unrest and “restore order”.

Troops were moving in to flashpoints on Tuesday as outnumbered police seemed helpless to prevent attacks and looting on businesses in Zuma’s home province KwaZulu-Natal and in Gauteng province, where the country’s biggest city, Johannesburg, is located. Columns of armoured personnel carriers rolled down highways.

Al Jazeera’s Fahmida Miller reporting from Johannesburg said looting and rioting continued throughout the night and into the morning.

“We are also seeing crowds starting to get hostile towards the police and throwing stones at them. Police are using rubber bullets and tear gas to try and disperse them,” Miller added.

We are seeing looting continue in Alexandra in Johannesburg. Police have now left this specific street and the crowd has grown. Earlier police fired rubber bullets and people responded by throwing stones. Several buildings have been torched @AJEnglish #SouthAfrica pic.twitter.com/4h9Kay9YTP

Shops, petrol stations and government buildings have been forced to close. Looters carried off items ranging from beer and foodstuffs to household appliances, footage showed, and at least one shopping mall was completely trashed.

In some areas of the coastal city of Durban where shops were being looted, there was no police visibility, Reuters news agency said. At a mall in Johannesburg’s Soweto township, police and military were patrolling as shop owners assessed the damage.

Cele said 757 people had been arrested so far. He said the government would act to prevent the violence from spreading further and warned that people would not be allowed “to make a mockery of our democratic state”.

Defence Minister Nosiviwe Mapisa-Nqakula, speaking at the same news conference, said she did not think a state of emergency should be imposed yet.

Zuma, 79, was sentenced last month for defying a constitutional court order to give evidence at an inquiry investigating high-level corruption during his nine years in office until 2018.

The decision to jail him resulted from legal proceedings seen as a test of post-apartheid South Africa’s ability to enforce the rule of law, including against powerful politicians.

But any confrontation with soldiers risks fuelling charges by Zuma and his supporters that they are victims of a politically motivated crackdown by his successor, Ramaphosa.

The violence worsened as Zuma challenged his 15-month jail term in South Africa’s top court on Monday. Judgement was reserved until an unspecified date.

But the deteriorating situation pointed to wider problems and unfulfilled expectations that followed the end of white minority rule in 1994 and the election of Nelson Mandela in South Africa’s first free and democratic vote.

The economy is struggling to emerge from the damage wrought by Africa’s worst COVID-19 epidemic, forcing it to repeatedly impose restrictions on businesses that have hurt an already fragile recovery.

The crisis may have widened the gulf between haves and have-nots. Growing joblessness has left people ever more desperate. Unemployment stood at a new record high of 32.6 percent in the first three months of 2021.

But in an address on Monday night, Ramaphosa said: “What we are witnessing now are opportunistic acts of criminality, with groups of people instigating chaos merely as a cover for looting and theft.”