Danladi Bako, Fabian Osuji: Where are they now? 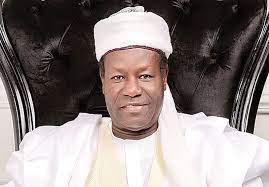 They once served the country in different capacities at different times. At the moment, it isn’t clear where they are now and/or what they are doing; ELEOJO IDAC1HABA wonders in this piece.

Malam Danladi Bako is a former broadcaster. In fact, he shot to limelight through broadcasting and journalism. He began his career in broadcasting with Rima Radio in Sokoto in 1973, before he moved over to the Nigeria Television Authority (NTA) in Lagos where he anchored the popular Saturday morning programme, Morning Ride, which became a toast to many Lagos residents. He also anchored a sports programme called Master Sports alongside other sports journalists like Paul Bassey, etc, on NTA for a long time before higher national duties took him away from the tube. The story of Bako cannot be complete without a mention of his assignment with the National Broadcasting Commission (NBC) where he served as its director general between 1999 and 2002. He was prior to this time the head, Maiduguri zonal office of the commission. His sojourn in NBC as its DG was his last known public appointment. Since then he returned to Sokoto with little or no information about him.

While reflecting on his life at 60 a few years ago, he said, “As a young man, I wanted to make an impact on society in whatever profession I chose. I think I did that by my performance at the Nigeria Television Authority. I created the first breakfast show on TV and I also created the template for the sports programmes they do today. At the National Broadcasting Commission, I was able to register a satellite company that would broadcast African content. It is a major legacy.”

Writing about him, Samuel Ajayi, a public commentator, said, “When Danladi Bako approached his bosses at the Nigerian Television Authority (NTA) late in 1987 that he wanted to do a live talk show with a phone-in segment, they plainly told him he was crazy. And his bosses had their reasons. This was over 30 years ago with the NTA the only television station, apart from state-owned ones that were not transmitting beyond their boundaries. Besides, Nigeria was under a full blown military dictatorship with freedom of speech only on paper. ‘You want someone to call in and abuse Babangida?… no way sir. I won’t allow that’, Bako was told by one of his bosses at the NTA headquarters in Lagos. But he was not a man to give up. He gave them assurances that all would be well managed and that the red line would not be crossed. Grudgingly, they gave him the go-ahead and the first television talk-show in the country, Morning Ride, was born. This was in 1988. Danladi went ahead to make the programme a talk-show nobody wanted to miss. Getting celebrities to come on the programme was not always difficult,” he said. Bako is someone whose input in journalism, broadcasting and entertainment was immense, but for some time now, he has been quiet thus prompting the question of where he could be at the moment.

He is a professor from the University of Nigeria Nsukka and was the former minister of education between July 2003 and March 2005 under former President Olusegun Obasanjo. An outstanding scholar from youth, Osuji attended Holy Ghost College, Owerri, Government College Umuahia and the Universities of Nigeria Nsukka and Ibadan, respectively. His appointment as education minister was widely acknowledged as a round peg in a round hole.

He was, however, relieved of his position by President Obasanjo in March 2005 following his indictment by the Economic and Financial Crimes Commission (EFCC) for allegedly offering N55 million ($400,000) in bribes to the National Assembly to pass an inflated budget. In 1991, he emerged as the Imo state governorship candidate under the Social Democratic Party (SDP) with an unprecedented landslide victory.

An enormously popular candidate he was, Osuji was heavily favoured to win the governorship election ahead of the late Senator Evan Enwerem who was of the National Republican Convention (NRC). However, a few days to the election, Gen. Ibrahim Babangida disqualified Osuji and Atiku Abubakar and other leading governorship candidates in several states. He later served as the Imo state commissioner for information and social development from 1994-1996 and pro-chancellor and chairman of the governing council of the University of Nigeria, Nsukka, between 2000 and 2003. Osuji, who was in the eye of the storm when the NASS scandal lasted, was described by many as a victim. However, according to others, he was simply not smart enough.

According to Ndubueze Godson in Dr Fabian Osuji, an Extortion Victim?, “His failure to exercise good judgment and tell all, I mean everything caused his camel walk to come to a screeching halt on a cold floor with cold sweat. His futile effort to save Nwagbara and his cronies caused his meagre reputation to spiral out of bounds. Why even shield those that never used their influence to rescue you from the silly demand for payment before a budget that does not go to you is passed? Where were these brothers of his who connived with others to shake him down into parting with millions for their selfish use?”

Not too long ago, he was quoted as saying that poor management of funds and failure on the part of the federal government to implement existing laws are the reasons Nigeria has no fewer than 13.2 million out-of-school children.

“It is shameful that Nigeria still has 13 million children out of school after passing several laws on education reforms and failing to implement them. Our problems are the problems of management and our failure is the failure of management. For us to be poor or to be counted as one of the poorest in the world means that Nigeria has not been able to manage its vast resources appropriately.”

Besides this, not much has been heard about this erudite scholar for a long time now.

Until recently, he was the chairman of the telecommunications giant, Etisalat Nigeria, before he retired following the dwindling fortunes of the company. Keem, as he is known by his colleagues in the corporate world, was the chairman of United Bank for Africa (UBA) before the Central Bank of Nigeria (CBN) forced him to vacate office following some infractions even though he was later absolved of any wrongdoing. He shot himself to limelight in the late 80s, when he was appointed as special assistant to Dr. Rilwanu Lukman, the late former minister of petroleum and energy under ex President Ibrahim Babangida. This Edo born boardroom guru can be described as a lucky man because of the fast growing career he had both from the government circle to the private sector. When he left Etisalat a few years ago, many thought he was a sad man, not until a recent public event.

According to a popular news print medium, “Since he left his plum position as chairman of Etisalat Nigeria, all it took for many to know that Hakeem Bello-Osagie, a former chairman of United Bank for Africa is not nursing any pains in his heart was the wedding of his beautiful daughter, Adesuwa, recently. Until that memorable day, many had thought erroneously that the brainy boardroom guru might not be inspired to engage in any loud celebration after he lost his plum position as chairman of Etisalat Nigeria now rebranded 9Mobile.”

Bello-Osagie is, however, one Nigerian that has been quiet in recent times even though he is not among those one can say age is no longer on their side.