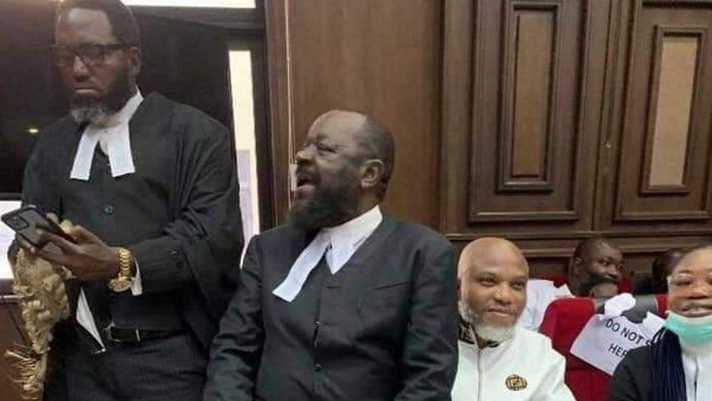 Leader of Indigenous People of Biafra (IPOB), Nnamdi Kanu during his trial at the Federal High Court in Abuja PHOTO: LUCY LADIDI ATEKO

Counsel to Nnamdi Kanu, leader of the Indigenous People of Biafra (IPOB), Aloy Ejimakor and Ifeanyi Ejiofor, have jointly lamented his condition in the Department of State Services (DSS) detention facility, describing it as harsh, degrading and inhuman.

In a statement, yesterday, the lawyers said that Kanu instructed them to make his detention condition public and hence it is contrary to the court order on his detention.

According to the counsel, Kanu is solitarily confined to a very tiny cell for 23 hours of the day without access to sunlight or any social interaction whatsoever and it is aimed at inflicting extreme emotional and mental distress on him and breaking him psychologically.

They stated that any detainee who encounters and greets him during the single hour he is allowed outside his cell is promptly put in solitary confinement or transferred to maximum security as a punishment for exchanging mere greetings with him.

The detainees, according to them, have resorted to avoiding Kanu or exchanging salutations with him, not to talk of any other form of social interactions.

The two lawyers further stated that since the Nigerian government extraordinarily detained him, he has not been allowed a change of clothing; and his Jewish prayer shawls and other religious materials brought to him by his counsel rejected and returned.

The statement stated: “The DSS has refused to replace his corrective glasses (lenses), which were smashed to smithereens by agents of the Nigerian government in the process of the violence unleashed on him while abducting him in Kenya. This has led to a rapid deterioration of his sight.

“He is restricted to meeting with his counsel in an atmosphere devoid of private discussions and he is oftentimes denied perusal of legal documentation his counsel brings to him to review.

“He is not allowed to sleep with a pillow and this has led to him developing acid reflux, which comes with acute burning sensations in his chest and extreme difficulty in swallowing.”

MEANWHILE, the DSS has advised Kanu to approach the court if unsatisfied with the treatment given to him at detention facility. The DSS spokesman, Peter Afunanya, in a statement, yesterday, said the secret agency would not make any public statement on a matter described as ‘subjudice.’

“Besides, any aggrieved party(ies) can seek redress as maybe appropriate in law,” he stated.