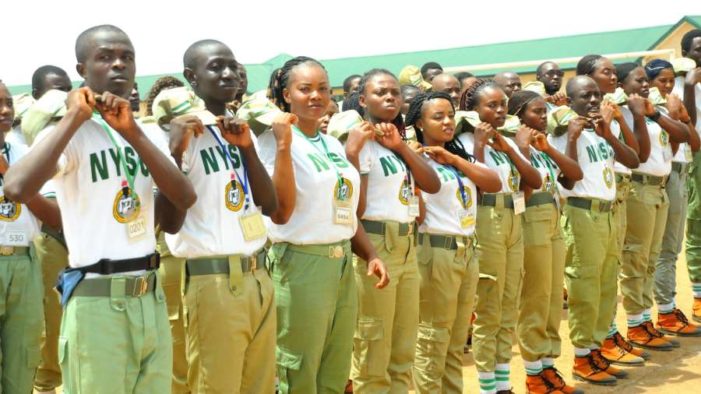 NYSC members nationwide have expressed gratitude to the Federal Government on the fulfillment of its earlier promise to increase their monthly allowance from N19,800 to N33,000 in line with the new national minimum wage.

They expressed happiness and thanked government for the increase.

The Director-General of the scheme, Brig.-Gen. Shuaibu Ibrahim, announced during a recent working visit to the NYSC secretariat in Bauchi that Federal Government had approved N33,000 as new NYSC allowance.

A statement on the service’ official Facebook page also quoted Ibrahim as saying that provisions for the new allowance had been made in the 2020 budget “and payment would commence as soon as funds are released by the appropriate authorities”.

Consequently, the NYSC Director of Press, Mrs Adenike Adeyemi in a statement on Friday in Abuja, said corps members had been receiving alert of ₦33,000, being the new allowance recently approved for them by the Federal Government.

She stated that a cross section of corps members had confirmed receipt of the new allowance and commended the NYSC boss for the effort and the Federal Government for keeping the promise.

Adeyemi quoted corps member Aisha Isa Sakpe (FC/19A/0093) in Abuja as saying “I am excited to receive the new allowance as promised by the DG. I actually lost hope due to delay in the payment.

“This gesture is indeed a motivation  to render more selfless service to the nation.”

A corps member from Bayelsa, Benjamin Ugochukwu (BY/19B/1351) currently serving in Sagbama Local Government Area said though he was yet to receive the new allowance, it would adequately cater for his needs.

In Zaria, Kaduna State, Ummi Kaltum Ali (KD/19C/3768) expressed optimism that the new allowance would enable her to register and actively participate in the post camp Skills Acquisition and Entrepreneurship Development (SAED) programme in Fashion and Design.

Other corps members across the country took to social media platforms to appreciate the NYSC boss and the Federal Government for the gesture.

Nwaguru John on the NYSC official Facebook page thanked almighty God to have been given the privilege to serve the country.

The NYSC press director, therefore, urged corps members to reciprocate the government’s gesture by redoubling their commitment toward selfless service to the nation.

She noted that “this gesture, no doubt, demonstrates government’s acknowledgement and determination to continue to appreciate the invaluable contributions of corps members to national development.”

She recalled that corps members’ monthly allowance was last reviewed by government in 2011.(NAN)