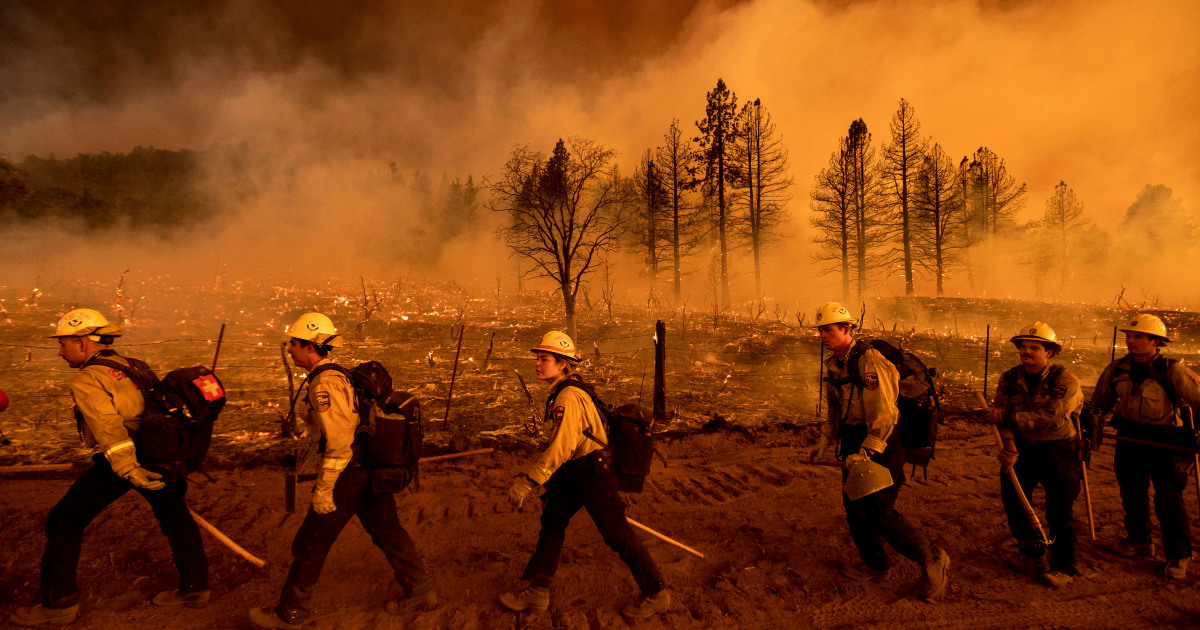 Firefighters battled a surging wildfire in Northern California under blazing temperatures as another heat wave hits the Western United States this weekend, prompting an excessive heat warning for inland and desert areas.

California’s Death Valley National Park, about 177km (110 miles) west of Las Vegas in the neighbouring state of Nevada, registered a high of 54 Celsius (130 Fahrenheit) on Friday and was expected to reach the same temperature on Saturday.

If verified, the temperature reading would be the hottest high recorded there since July 1913, when the same Furnace Creek desert area hit 57C (134F), considered the highest reliably measured temperature on earth.

The Beckwourth Complex – two lightning-caused fires burning 72km (45 miles) north of Lake Tahoe – showed no sign of slowing its rush northeast from the Sierra Nevada forest region after doubling in size between Friday and Saturday.

Local newspaper The Mercury News reported that about 1,300 personnel were deployed on Saturday to stop the flames from reaching populated areas near the blaze, while some evacuations had been ordered.

The National Weather Service (NWS) Weather Prediction Center said on Twitter on Friday morning that “record-breaking heat” was expected to affect “much of the West and Southwest” during the weekend.

“Over 31 million people are currently under an Excessive Heat Warning or Heat Advisory. Highs well into the triple digits could threaten Las Vegas’ all-time high temperature record of 117F,” the centre said.

Although there are no confirmed reports of building damage, the fire prompted evacuation orders or warnings for roughly 2,800 people along with the closure of nearly 518 square kilometres (200 square miles) of Plumas National Forest.

The blazes come just weeks after the northwestern US and Canada’s west coast were hit by record temperatures late last month, prompting authorities in both countries to open cooling centres and urge residents to stay cool indoors.

Record-breaking heat is set to impact much of the West and Southwest this weekend. Over 31 million people are currently under an Excessive Heat Warning or Heat Advisory. Highs well into the triple digits could threaten Las Vegas’ all-time high temperature record of 117F. pic.twitter.com/vP4NXEeKGh

The heat wave contributed to hundreds of deaths in the province of British Columbia alone, officials said.

Experts have said climate change is fuelling more extreme weather events, such as wildfires and heat waves – and some have urged US President Joe Biden to take up an ambitious, long-term strategy to reduce the risk of devastating wildfires.

The weekend’s potentially record temperatures on the US west coast come after the hottest June in 127 years of record-keeping, according to the National Oceanic and Atmosphere Administration (NOAA).

Eight states recorded their hottest June on record this year, while another six logged their second-hottest, the NOAA said.

Spot fires caused by embers leapt up to 1.6 kilometres ahead of the northeastern flank – too far for firefighters to safely battle – and winds funnelled the fire up draws and canyons full of dry fuel, where “it can actually pick up speed”, Cox said.

Firefighters usually take advantage of cooler, more humid nights to advance on a fire, Cox said, but the heat and low humidity never let up.

The NWS’s Weather Prediction Center also said on Saturday that even if the temperatures do not break records, “the widespread, oppressive, and long-lasting heat remains a threat”.