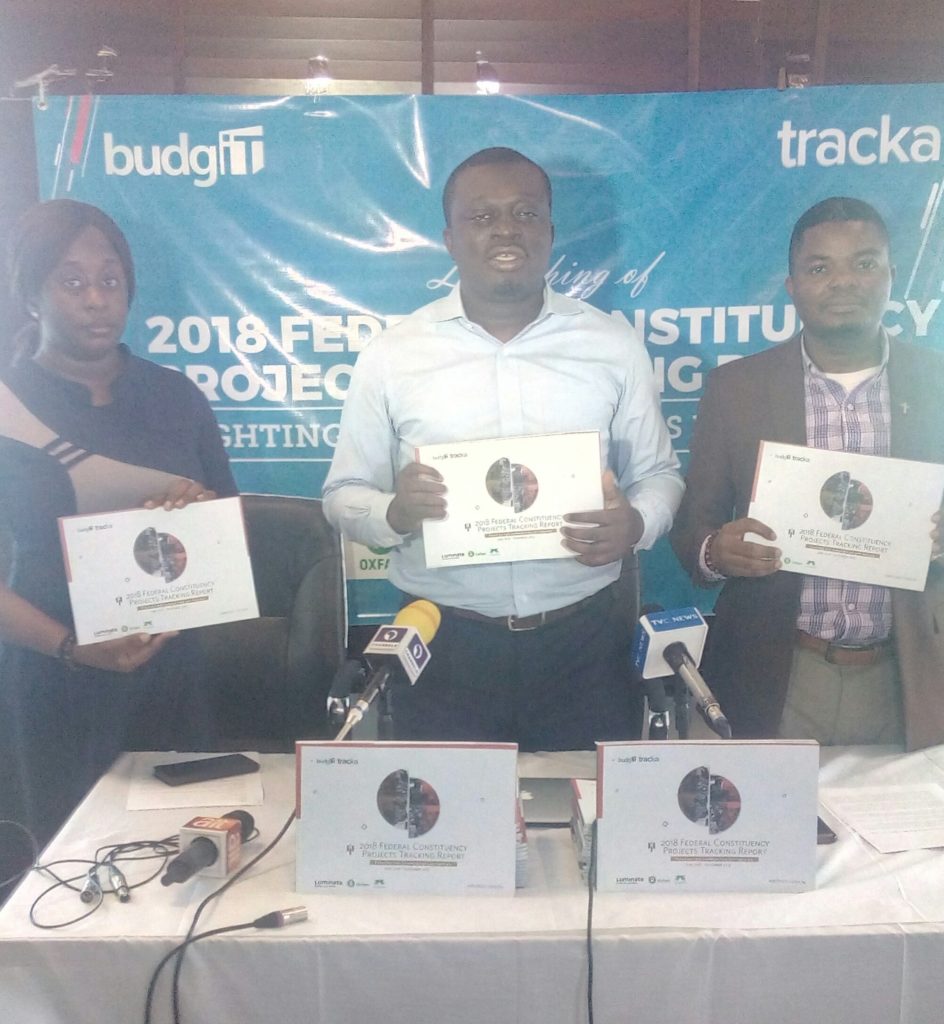 BudgIT, a Civic organisation that facilities societal change has recommended that funds be strategically allocated to Constituency Projects to aid its implementation in the country.

Mr Oluseun Onigbinde, Director at BudgIT made this known at the presentation of the 2018 Tracka Federal Constituency Projects Tracking Report on Wednesday, in Lagos.

He said that constituency projects  were  meant to drive dividend of democracy in the country especially at the grass root.

He added that there was the need to strategically allocate funds for the projects to achieve its objectives.

The organisation said that through its project monitoring platform Tracka, it was able to identify other areas that would help in the implementation of Constituency Projects in the country.

“Tracka was established to address critical issues surrounding social and economic development in Nigeria, make public funds work for the good of everyone and help to enhance the implementation of capital projects.

“In the 2018 report, it confirms that only 475 zonal intervention projects (popularly called constituency project) were completed out of 1,497 projects and the projects were tracked across 26 states between June 2018 and November 2019.

“From the 2018 Zonal Intervention Projects, a total number of 1,497 projects were tracked while 475 projects were completed; 144 are currently ongoing; 536 were yet to start; 42 were considered abandoned, and whooping 224 projects had unspecified locations,” he said.

Onigbinde  said that Zonal Intervention Projects were public projects nominated by federal lawmakers to extend the dividends of democratic government to their various constituencies in the quest to unleash development at the grassroots level of the country.

He noted  that the report enunciated the most critical challenges of Constituency Projects in 2018 and highlighted some viable solutions to those challenges.

He said that Tracka’s ultimate goal was to open up public finances to the wider Nigerian populace, making them vanguards for service delivery and transparency.

Mr Gabriel Okeowo, Principal Lead, BudgIT said that they consequently recommended in the report that strategic allocation of funds was crucial and  design of empowerment projects calls for deeper thought.

Other recommendations, he said were assessment needs to be prioritised, sabotage of capital projects must be checked and punished and tax funded government projects labelled as donations be dissuaded.

He listed some challenges observed during the project tracking  to include the proliferation of empowerment items, alleged contract inflation and  unspecified project locations.

He added that inadequate supply of equipment and materials to uncompleted structures, use of substandard products and poor civic unawareness of budgetary provisions were part of the challenges.

Commenting on Tracka, he said “Tracka expands citizens’ understanding of the budget, in particular on the contextual issues affecting them, empowering them to demand accountability and budget implementation.

“We also note that only 30 per cent of funds have been released for 2019 constituency projects (at the time of preparing this report).

“We make bold to declare that poor release of funds for these projects will continue to affect implementation across the country.”

Okeowo pointed that that Tracka’s influence was spreading through their focus communities as they have a presence in 586 local government areas across 26 states in Nigeria.

He noted that they had tracked over 15,859 projects in 7,589 towns and organised over 7,612 town hall meetings across the country.

“We are also glad to have fruitful collaboration with agencies of government like the Independent Corrupt Practices Commission (ICPC) to give credence and effectiveness to our project tracking initiative.

“We call on government across all tiers to make concerted efforts to ensure citizens benefit from dividends of democracy.

“BudgIT plans to reach out to the leadership of the National Assembly on improving the nomination process of constituency projects. (NAN)