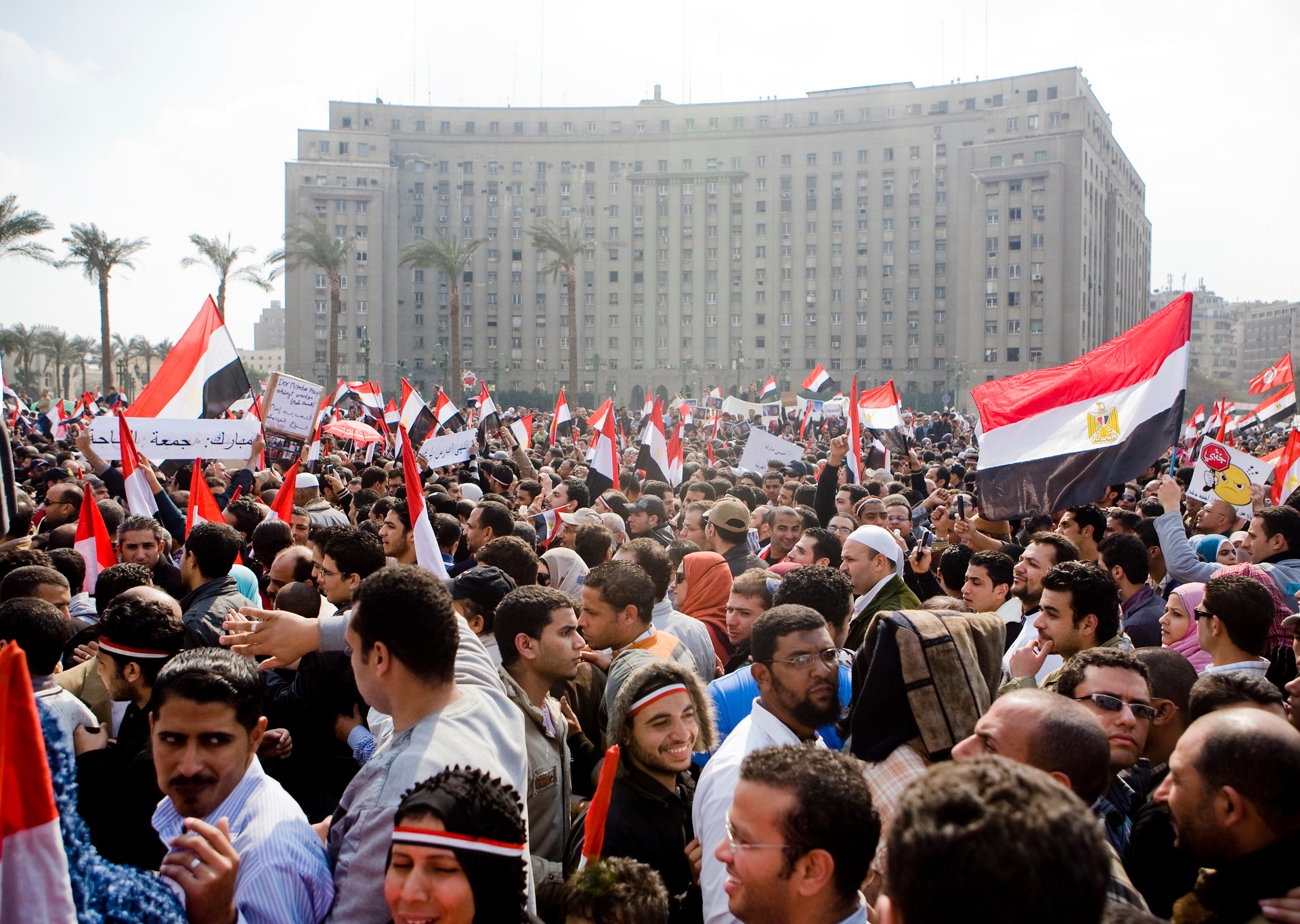 The following is an edited excerpt from Rusha Latif’s new book, Tahrir’s Youth: Leaders of a Leaderless Revolution. The book tells the story of the young activists who sparked the mass uprising in Egypt that led to the spectacular collapse of the government of President Hosni Mubarak in 2011 and who struggled in the succeeding years to remake the country. The excerpt explains the strategy conceived by the organisers to help Egyptians, especially those of lower class backgrounds, overcome their fear of the police and join them en masse in the streets on January 25, 2011. Twenty secret locations were announced on social media sites, which served as a decoy from a 21st secret location.

The activists I interviewed confirmed that the secret strategy for the January 25 protest was the brainchild of April 6 activist Mahmoud Samy, a dapper and astute young man recognized for his clever innovations in street-protest tactics.

A son of Cairo’s popular quarters himself, he was well versed in the spaces, mobility, and vulnerabilities of its subaltern inhabitants and understood how to negotiate them in his planning to the advantage of January 25’s day of protest.

This class capital informed his selection of Nahya Street in the impoverished, informal quarter of Bulaq al-Dakrur, near his neighborhood Awsim, as the site of their twenty-first secret location and the start of their march.

The goal was to figure out how to get Egyptians to overcome their fear of the police who patrolled their neighborhoods and join their protest. “When I thought about it,” Mahmoud said,

“I recalled that one of the things we often encountered before this during protests is that the people watching were afraid to join us. Why were they afraid to join us? Because our numbers were small. So you have two choices: you make it so that there are no police, or you make sure that your number is large. How do you make yourselves many? There was the idea of the snowball, that the more headway your march makes, the larger it swells.”

The idea was to start with a secret rally in a low-profile, confined space situated in one of Cairo’s many crowded popular neighbourhoods.

There they would concentrate a few hundred of their fellow activists to impart the illusion of a large crowd to spectators needing the assurance of safety in numbers before deciding to join in.

What attracted Mahmoud the most to Nahya Street in Bulaq, of all the popular areas he surveyed, was the bridge at the end that connected it to Arab League Street, a major, bustling thoroughfare peppered with high-rise apartment buildings, retail shops, and restaurants.

The overpass perfectly tied this informal area to the upscale district of Mohandiseen, where they could potentially draw in even more demonstrators, showcasing in their march a diverse cross-section of society.

If they planned it right, they would surprise police and observers with a dazzling show of resistance hitherto unseen in these parts.

With the support of fellow April 6 organiser Amr from Imbaba and another peer from the Youth for Justice and Freedom Movement, Mahmoud designed a route and plotted the details of a march that would take them from their meeting point near a small, nondescript bakery at the far end of Nahya Street down Arab League Street, allowing their numbers to snowball before they would link up with the demonstration at Mustafa Mahmud Square.

There, they planned to lead a standing demonstration for a few hours before dispersing.

To ensure the successful execution of this protest, they visited the area regularly in the two weeks leading up to Police Day to carry out practice runs, timing how long it would take to walk, jog, and run to see how much time they would need to synchronise with the marches coming from other parts of Giza as well as Shubra, which were being planned by other groups like the Revolutionary Socialists. They also developed strategies for possible police ambushes.

There was no firm intention to protest in Tahrir Square at this stage, although Mahmoud and his peers had long dreamed of descending upon and conquering the square with thousands of protesters.

Located in Cairo’s downtown, Tahrir – which appropriately means “Liberation” – was the largest public space in the city, and it derived its symbolic weight as the flashpoint for political resistance from the surrounding institutions of state power.

Mahmoud shared that there was some talk of the conditions under which they might consider heading to Tahrir.

He said that the agreement was to continue to Tahrir if luck was on their side and their numbers reached one thousand, a target which they felt at the time was quite ambitious.

This reflects how unlikely they felt it was that they would be able to rally a large enough group of protesters to make such a dramatic and daring move.

On the morning of January 25, Mahmoud, Amr, and the rest of their cohort anxiously prepared to execute their plan.

To ensure top secrecy, the plotters only informed ten activists of the Nahya location.

Each was told ahead of time to have their cells meet them at a second location somewhere in Cairo of their choosing, and from there they were to lead them clueless to Nahya.

Everything went according to plan.

At 12 p.m., approximately 250 activists managed to evade the notice of police and meet in the small plaza in front of a local bakery known as Al-Hayyis, nestled in this dense and crowded impoverished area.

Zyad the attorney, who spoke softly unless he was in revolutionary mode and railing against the establishment, delivered a rousing address directed at local residents peering over from their balconies.

“Today is January 25, Police Day!” he roared into the megaphone. “We decided to come here today to tell the Egyptian government that we will no longer be silent!”

He beckoned the crowds to join them: “Today we either stand side by side and take our rights together, or we lose the chance! It’s now or never!”

Zyad had their ears. The rally quickly began to swell and flow over into the neighboring alleyways.

Activists began marching, calling on the multitudes watching from their balconies to join them: “Ya ahalina! Indammu ilayna!” (Our people! Join us!), they chanted, “Inzil! Inzil!” (Come out! Come out!).

The numbers that heeded the activists’ call dramatically exceeded their expectations.

Expecting to rally a thousand residents at best from Nahya Street, instead they left it with a stunning march at least five thousand protesters strong, which only continued to snowball as it made its way down Arab League Street.

Their numbers were so large that when the nearby Central Security Forces caught wind of their march and rushed to the pedestrian walkway on Nahya Bridge to block them, the protesters were able to forego that route altogether and take over the traffic lanes instead, making a mockery of the officers who were hopelessly outnumbered and could do nothing to stop them.

It was a triumphant moment for the activists who, for the first time, had managed to overwhelm and disorient security forces. They were deliriously happy. Abdelrahman described their utter shock and euphoria as they poured over Nahya Bridge and splashed onto Arab League Street:

“I’ll never forget the scene when we got onto Arab League. It was as if the people were gushing from beneath the ground. This was one of the most moving scenes . . . and we began crying and hugging each other, and we kept shouting, ‘Intasarna!’ (We won!) What had we won exactly? Who knew?! What was coming, nobody knew!”

“Just the fact that we were able to participate in a march like this, that we were able to witness a march this big, was a sheer victory. We started embracing each other and kissing each other, and the people were looking at us like, ‘Who are these crazy people?!’ . . . Before this we’d organise a march and at times we’d be only twenty or thirty people. When there were five hundred in our protests we were over the moon. . . . Now, we couldn’t see the beginning of the march from its end! We were so beside ourselves you would have thought we were drunk. I’m talking borderline hysteria. . . . And then there was this feeling at this moment, that if this many people had mobilized, that meant something major had shifted in the country. A leap had happened in the people’s political consciousness – a radical change, a deep desire for freedom.”

As the Nahya marchers approached Mustafa Mahmud Square at 2 p.m., they were met with thousands more protesters.

Their numbers were also so large that they were easily able to break through the cordons of the security forces that tried to contain them.

At Mustafa Mahmud Square, it became clear to those leading the march that the enthusiastic response of the people was unprecedented, qualitatively and quantitatively different from anything they had ever experienced before and from what they had expected.

At this point, they agreed it required a different course of action.

Realising they had a potential uprising on their hands, activists from this point onward started making on-the-spot decisions, which were informed by the rich political experience gained through their active participation in multiple, albeit much smaller, street demonstrations.

This gave way to a very present organising process in a fluid dialectic between the unfolding street events and their political skills. Tarek’s reflection captures this best:

“My feeling at this moment was that the street had mobilised, finally! … The explosion that we wanted had actually happened! All of us were thrown into a state of shock because we didn’t. . . . I mean, we had thought a lot about how we would get the people to come out, but we had never thought about what we would do with the people if they did come out. We were all dazed and like, ‘What are we going to do with all these people?!’ Because we hadn’t expected that they would come out. So when they actually did, it was like, ‘Ok, so what are we going to do now?!’ That’s when we started to say, ‘To Tahrir Square!’”