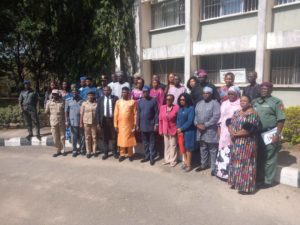 Dr Rufus Ebegba,Director- General, National Biosafety Management Agency (NBMA) has called for collaboration between relevant stakeholders to  ensure a National Biosecurity Policy that will help safeguard humans and the environment.

Ebegba made the call at the National Biosafety Management Consultative Meeting on Biosecurity in Abuja on Friday.

The News Agency of Nigeria (NAN) reports that President Muhammadu Buhari assented to the NBMA Amendment Act in August 2019.

The Act expanded the scope of the agency to include emerging aspects of modern Biotechnology and Biosecurity.

Ebegba said that for the agency to achieve its new mandate on Biosecurity, it need the collaboration of other agencies.

“The agency has been mandated to put in place Biosecurity measures to ensure that biological agents are not realised into the environment.

“So, the essence of this gathering is to bring all relevant stakeholders because the agency realised that there are other stakeholders doing pockets of issues on Biosecurity

“We know most of the Biosecurity aspects that are being handled by other agencies borders on human health but we are going beyond that to look holistically on the environment, biodiversity and other living organisms.

“What will be the impact of biological agents that are harmful to other aspects of our lives,” he said

He added that the agency was also going to look at how strategies to counter bioterrorism could be developed adding that the world had gone beyond “Guns and Bombs’ to the use of bioterrorism.

The D-G assured the stakeholders present that the agency would not be in conflict with other agencies nor steal their mandate but would work with existing mandates before coming up with an Act on Biosecurity.

He stressed the need for punitive measures against the malicious use of biological agents, saying the agency had one in place.

They all agreed that it would be better to come up with one national document.

Mr Maishanu Sani from Interpol Nigeria, told NAN that there was the need for a National Biosecurity Policy because of the current international threat on Bioterrorism.

He added that one agency of government could not do it alone.

“Before now, we usually share intelligence to other agencies of government regarding Bioterrorism and NBMA were not inclusive because a gathering like this has not taken place before.

“But with this recent development, I think NBMA will be the main focal point to address this issue.

“All these while, other agencies are dwelling on existing document but with this Act, we will have a specific punishment for a crime.

“We will also have a mandate we can rely on and I think it will go a long way to deal with this issue of Biosecurity,” he said.

He said that stakeholders expected at the meeting include the Armed Forces, the Police, Interpol, Representatives from the National Security Advisers Office, Secretary to the Government Office, Ministry of Health, National Centre for Disease Control, among others.