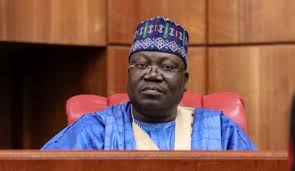 The Senate on Wednesday passed for second reading a bill for an act to establish the National Electoral Offences Commission and for related matters 2020.

The passing of the bill followed a lead debate by the sponsor Sen. Abubakar Kyari (APC Borno) and the supportive contributions of several senators.

Abubakar in his lead debate on the general principles of the bill, said that the bill would help solve the myriads of problems associated with elections in Nigeria.

He said electoral crimes was aiding election riggers and offenders to take control of government against the will and wish of the people.

According to him, the bill designed to protect public interest and curb electoral crime have seven parts and 35 clauses.

Contributing Sen. Sarajudeen Ajibola(APC Osun) said the bill was part of the legislative agenda of the 9th Senate.

He said election must be free, fair and credible devoid of interference and rigging.

According to him, election rigging is responsible for political apathy.

Eyinnaya Abaribe(PDP Abia)said the Uwais report did not suggest a commission but the establishment of a tribunal to deal with electoral offences.

He said there was need to understand the distinction between a commission and tribunal which was aimed at cleaning up the system.

Sen. Ike Ekwerenmadu(PDP Enugu) said there was concern on the establishment of a tribunal or commission for electoral offences.

He advised on the possibility of establishing a tribunal while emphasising on its independence and impartiality.

He urged Nigerians to contribute during the public hearing and ensure that decision that would be taken aligned with best practices.

Senators who  also contributed to the bill are Adamau Aliero, Yahaya Abdullahi, Rochas Okorocha, Smart Adeyemi, James Manager and George Sekibo, among others.

The bill was referred to the Senate Committee on INEC for further legislative input and to report back to plenary in four weeks.(NAN)