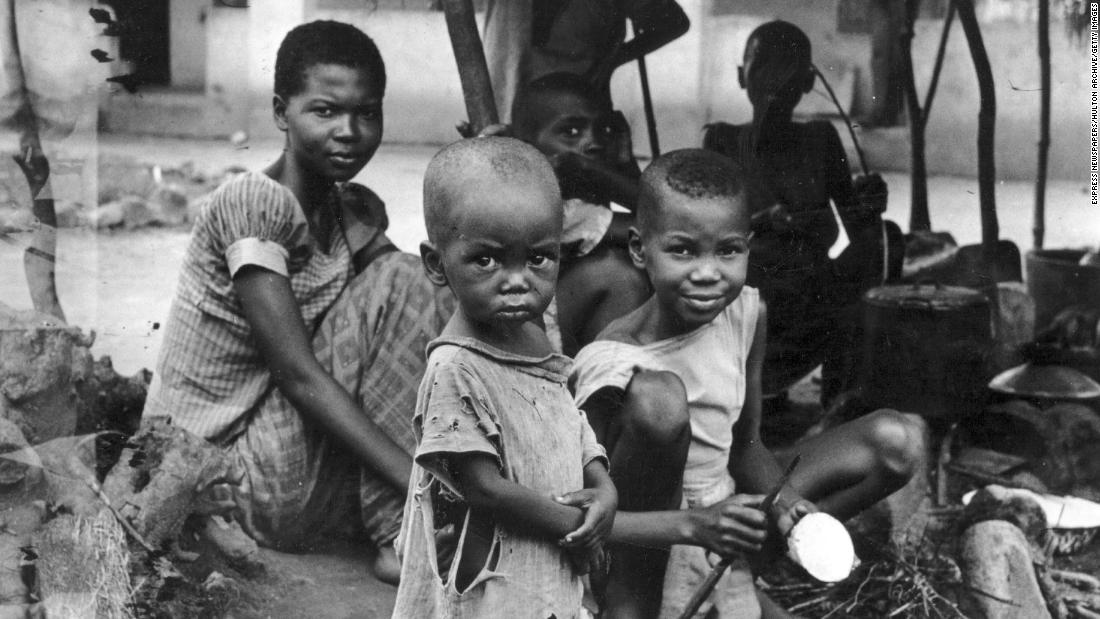 It was said to be the world’s first televised war and the haunting images of starving children caught in a civil war shocked the world.

Okororie recalls that she and her seven children had taken refuge in Oguta, a lakeside town near a local airport, which served as Biafra’s major supply line for arms and relief materials from international charities.

But tragedy struck when Nigerian combatants launched an airstrike.

“The bomb fell on my older brother’s house,” Okororie said of the missile that missed its target, an adjacent military encampment.

“My mother died with three of my children, two boys, and a girl,” she told CNN.

Okororie says she wished she had died, too. “I looked for death but I couldn’t find it.”

Now in her 80s, Okororie is one of the millions of civilians who lived in what was then Biafra — a secessionist state carved out from Nigeria’s southeast in 1967.

Ojukwu, the son of a wealthy businessman, studied history at Oxford University. He returned to Nigeria in 1955 after his graduation and later joined the army where he was eventually appointed military governor of the eastern region of Nigeria, mostly inhabited by Igbo people.

Ojukwu declared independence for the Republic of Biafra in 1966 following a spate of violence that occurred in the north of Nigeria against Igbo people.

The Nigerian government at the time opposed secession, which ensued after failed talks on reconciliation. This led to a divisive and bitter war from 1967 to 1970.

The horrors of war

Okororie says she abandoned her clothing business in Port-Harcourt city, where she resided before the start of the war and fled with her seven children to Oguta as Nigerian soldiers advanced on the city in the Biafran territory.

“People were running. We were being shelled from everywhere,” she said, recalling the day Nigerian combatants reached the city.

She says they walked all day and survived only on achara, a vegetable similar to a leek, until they got to their destination. “Pregnant women were left behind by their husbands as they gave birth, ” she added.

The war ended 50 years ago on 15th January 1970 when Ojukwu fled the country. He left for exile in Ivory Coast and spent many years in the West African country before he was pardoned by Shehu Shagari, Nigeria’s first democratically elected president in 1982.

Nigeria reabsorbed Biafra at the end of the war, in a ‘no victor, no vanquished,’ policy, which some Igbos believe has led to near-collective amnesia of the civil war in the country.

However, it is a period Okororie says she can never forget.

Like her, Eyiche Adizua, a former technician, fled to Oguta during the civil war. Before the war broke out, Adizua lived in Lagos, Nigeria’s commercial center with his family.

“When Nigeria declared war on Biafra, some soldiers visited my house while I was away, thinking I was a Biafra informant,” he told CNN.

Being from the eastern part of the country, Adizua says the soldiers on the Nigerian side questioned his flatmates, suspicious he was providing information to Biafran soldiers in the east.

“I had to leave for Oguta.”

But at some point, the Nigerian army invaded Oguta, leading a blockade and preventing relief materials from getting into Biafra, and as a result, hundreds of people died of starvation.

“Soldiers burnt houses and killed civilians… the lake was filled with dead bodies, including those of white mercenaries,” Adizua said. His uncle, who was too old to flee town, was murdered, he says.

The blockade against Biafra made essential commodities scarce, forcing women to make the treacherous two-day journey on foot to Afia Attack, a trading post behind enemy lines in Midwestern Nigeria.

Some women on the trail were raped and killed by soldiers, while others died in bombing raids. It was during one of Okororie’s trips to the market that her brother’s house was bombed.

Okororie said she sold food and other household items during the war in exchange for Nigerian pounds, which she then used to buy cigarettes, potash, salt, and marijuana since Biafran currency was not recognized beyond its borders.

She sold her items to both residents and Biafran soldiers.

“I was bringing salt to Oguta,” she recalled, “and selling weed.”

The civil war in Oguta and other areas in Biafra was life-changing. After it ended, markets, schools, homes, and lives devastated by bombs and bullets had to be rebuilt.

In addition, the federal government’s policy of giving 20 pounds to Igbos with bank savings, irrespective of what they owned before the war, left some impoverished.

Okororie wasn’t affected by the monetary policy as she had taken out all her money from the bank at the start of the war and, thus, had Nigerian pounds to convert to the new Nigerian currency, the naira.

Asked whether she harboured any resentment towards them, the businesswoman shook her head. “I wasn’t angry towards the Nigerian soldiers. What God wills is what happens.”

Adizua also got his old job back at NEPA and was paid his full salary for the years he was absent during the war.

“NEPA gave me back my job,” said Adizua, adding that the national electricity company also paid his full salary for the years he was away. But fearing for his safety, he decided not to return to his former location. “I told them I won’t work in Lagos, so they posted me to Oji River [in Enugu].”

Now 50 years since the end of the war, some are still clamoring for the return of the republic.

Led by British-Nigerian Nnamdi Kanu, the Indigenous People Of Biafra (IPOB), a group fighting for an independent state of Biafra wants the old eastern region of Nigeria to break away.

The separatist group has led multiple protests across eastern parts of the country calling for a separate homeland for Biafrans. They feel aggrieved that the Nigerian government has not adequately addressed the civil war and its aftermath.

But survivors like Adizua are cautious about the possibility of another war.

Now in his 80s, he says the war was a harrowing experience, and should never be repeated.

“I won’t subscribe to war today, because I saw war,” he said. “One united Nigeria is better.”