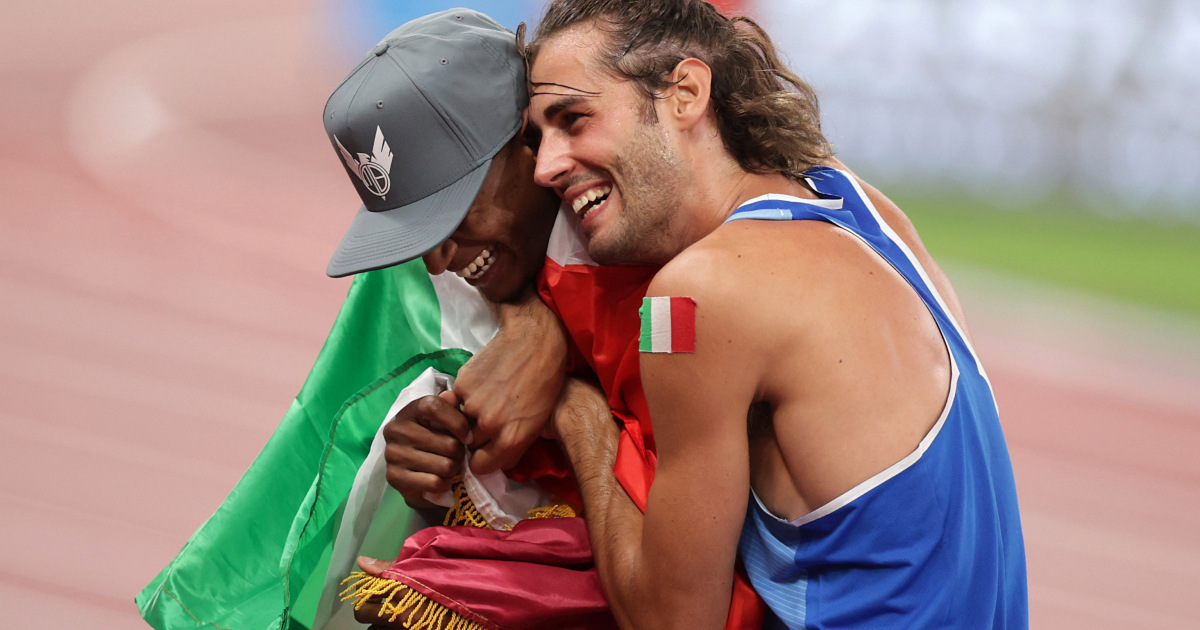 Social media reaction to scenes in Tokyo when Qatar’s Barshim and Italy’s Tamberi decided to share a gold medal in the high jump.

The world watched in awe as Qatar’s Mutaz Barshim and Italy’s Gianmarco Tamberi decided in a matter of moments to share an Olympic gold in the men’s high jump at the Tokyo Games on Sunday.

Both high jumpers were perfect until the bar was set to the Olympic-record height of 2.39m (seven feet, 10 inches).

Each missed three times then instead of going to a jump-off, they decided to share the gold.

“I know for a fact that for the performance I did, I deserve that gold. He did the same thing, so I know he deserved that gold,” Barshim said. “This is beyond sport. This is the message we deliver to the young generation.”

New York Times sports writer Jeff Pearlman commented: “I am in absolute love with this moment. Can we PLEASE bottle this and spread everywhere? The goodness. The love. The humanity. Please,” he wrote on Twitter.

“My two new favourite athletes: @mutazbarshim and @gianmarcotamber #Olympics2021″ he went on to write in another Twitter post.

After they decided, Tamberi slapped Barshim’s hand and jumped to hug him.

“Sharing with a friend is even more beautiful,” Tamberi said. “It was just magical.”

Following the win, Barshim took to his Twitter account and wrote: “What is better than one gold? TWO !! #tokyo2020”.

The iconic moment was captured on video and was widely shared on social media, with some describing it as the “best moment of Tokyo 2020”.

Sports reporter Ben Steiner wrote on Twitter: “Tears, hugs, and joy in the men’s high jump celebrations. That is the best moment of Tokyo 2020.”

Tears, hugs, and joy in the men’s high jump celebrations.

That is the best moment of Tokyo 2020.#Tokyo2020 #Qatar #Italy pic.twitter.com/UCptiZBRLB

Author Andrew Fidel Fernando said it was his favourite moment of the Olympics so far.

“One look, no words exchanged, they know they’re sharing it,” he wrote on Twitter.

Fave moment of the Olympics so far. Barshim (Qatar) and Tamberi (Italy) were tied in the high-jump final. The official is there talking about a prospective jump-off, but Barshim asks immediately: “Can we have two golds?” One look, no words exchanged, they know they’re sharing it. pic.twitter.com/E3SneYFocA

Another Twitter user said the “glorious and golden moment” was a “great example of sportsmanship”.

What a great example of sportsmanship! #Barshim (#Qatar) & #Tamberi (#Italy) who’ve decided to share the men’s high jump 🥇 medal. A winning jump of 2.37m for the both athletes.
That’s the #Olympic spirit. A glorious & golden moment.#Tokyo2020 #athletics@NabilaRamdani https://t.co/3fzOapqeeB

Others said the move cannot be topped by a “higher” jump.

“Accepting to share the Gold and encouraging each other while competing. You can’t beat that, win more or jump higher. Well done both,” Khaled Mughesib wrote.

The Tale of Two Gold Champions,Congrats to both #Qatar & #Italy for a Great Sportsmanship, Accepting to share the Gold and encouraging each other while competing. You can’t beat that, win more or jump higher.Well done both. #mutazbarsham #GianmarcoTamberi #Olympics2020 #Qatar pic.twitter.com/EJ8bMFv2Gy

Some referred to Barshim as a “true Olympian” for offering to share the gold medal.

“Hugh levels of #friendship and #respect shown from #Barshim. Amazing gesture and a true #Olympian,” a user wrote.

Another said he thought Barshim should be a contender for the Nobel Peace Prize for offering to share the gold medal with Tamberi.

My moment of the Olympics and surely a contender for Nobel Peace Prize (don’t ask me to justify it) was Barshim’s offer of a shared gold with Tamberi. What a fantastic moment that was. #Olympics #Qatar #Rhigas https://t.co/A83R1BrWvD