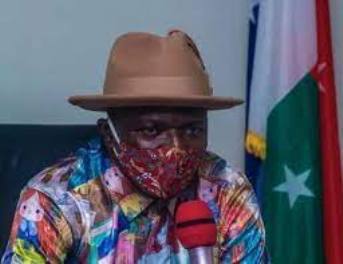 April 25, (THEWILL) – The Bayelsa State Government has solicited the partnership of international oil companies (IOCs) and other corporate bodies doing business in the state for the promotion of sports development.

The Deputy Governor, Senator Lawrence Ewhrudjakpo, made the appeal last Thursday, when a delegation of the Bayelsa State chapter of the Sports Writers’ Association of Nigeria (SWAN) paid him a courtesy visit in Government House, Yenagoa.

Ewhrudjakpo said the development of sports in Nigeria deserves more attention and resources than it is getting at present. Stressing that sports had not been given its rightful place of in the country, he pointed out that if managed profitably as a business, sports would create jobs for the army of unemployed youths in the state.

The deputy governor said government alone could not adequately handle the task of investing in sports.

He therefore called on oil firms, including the Nigerian Agip Oil Company (NAOC), Shell Petroleum Development Company (SPDC), and other corporate organisations to collaborate with the state government to invest in the promotion of sports in the state.

Ewhrudjakpo said that plans were underway for local government areas of the state to organise sports festivals for the identification and development of budding talents.

The Bayelsa number two man, who lamented the paucity of resources as a limiting factor in its sports agenda, called on the state chapter of SWAN to support the advocacy for corporate sponsorship of sporting activities and programmes.

He said, “The Sports Writers’ Association of Nigeria is quite a famous name and a very essential member of the Nigerian Union of Journalists. The role of the sports writer is the glory of all sports competitions.

“That is why we need your collaboration to drive our sports agenda. We want SWAN to help us write in this direction. SWAN should spearhead this campaign for multinational companies like SPDC, NAOC, Aiteo and others to partner and collaborate with government.”

Earlier, the Chairman of the Bayelsa chapter of SWAN, Mr Datonye Alambo, commended the Governor Douye Diri Administration for the outstanding achievements of the state in sports competitions, especially the double-headed Aiteo/FA Cup victories last season, and also emerging third at the National Sports Festival held in Edo State.

Alambo, however, appealed to government to support the SWAN capacity-building workshop for its members and to provide a bus to enhance the mobility of members of the association to national sports meets.

He also appealed to the Bayelsa State Government to build more sports facilities like mini stadia across the eight LGAs, as well as provide a secretariat for SWAN in Yenagoa, the state capital.

Datonye said, ‘It will always be on record that it is under this administration that Bayelsa State won the men and women cups, the first and only time that is happening in the country. Similarly the state’s contingent had a podium placement by finishing among the top three for the first time in the history of the National Sports Festival at the 20th edition in Edo State.

“To build capacity for our members, especially the young and upcoming sports journalists in Bayelsa State, we intend to organise a capacity building workshop to equip them with modern reporting skills and further expose them to digital and online sports journalism to enable members compete among their peers anywhere in the world and equally make them relevant, self reliant and productive.”