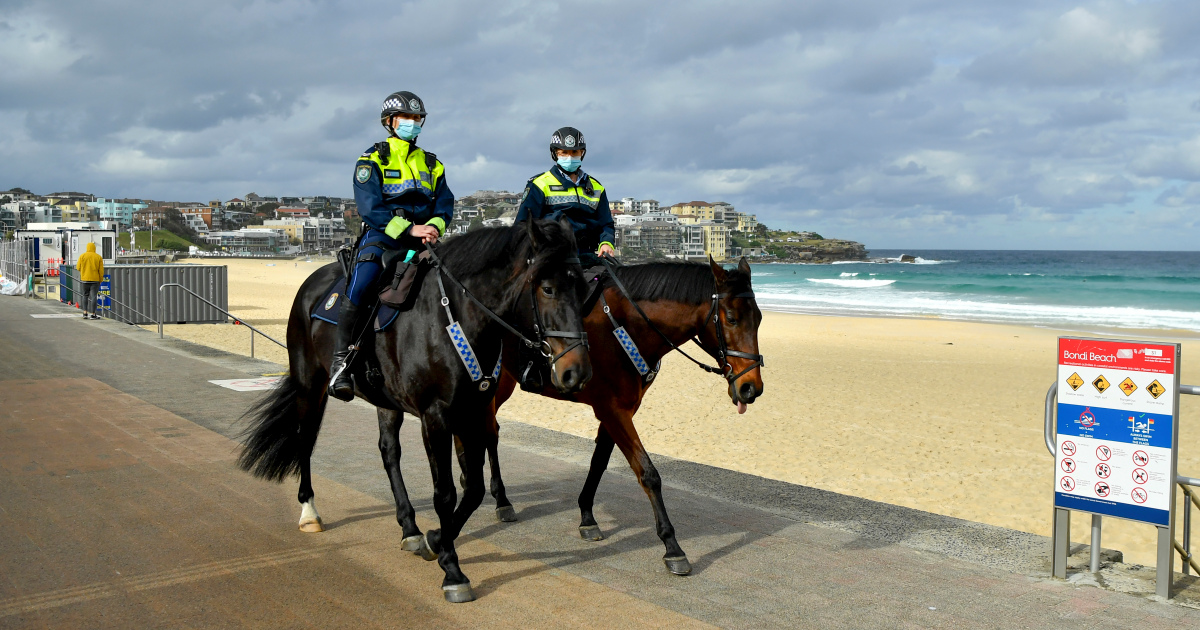 People in much of the Asia Pacific are facing punishing lockdowns as the spread of the Delta variant exposes the region’s vulnerabilities despite its success in controlling the spread of COVID-19 at the beginning of the pandemic last year.

South Korea, Thailand and Vietnam are the latest to announce strict social distancing measures, amid steep climbs in cases.

Part of the problem is the Delta variant that first originated in India and is significantly more transmissible, but sluggish vaccination programmes – mostly the result of a lack of supply – have also left millions of people vulnerable to infection. Worse, studies suggest that a single dose of vaccines that require two doses is less effective against the strain.

In some countries, the health system is already being pushed to breaking point.

Dr Dale Fisher, a professor in the Department of Medicine at the National University of Singapore, said many countries in the region were being “sorely tested” by the latest outbreaks.

Authorities in Sydney on Friday announced the biggest jump in cases in the city this year and tightened restrictions that have been in place since June 26.

Officials also warned that the lockdown could well be extended beyond July 16.

“New South Wales is facing the biggest challenge we have faced since the pandemic started,” Gladys Berejiklian, the premier of New South Wales state, told reporters in Sydney.

The outbreak in Australia’s biggest city began in the middle of June with a driver for overseas aircrews and was centred around the beach suburb of Bondi and has now grown to more than 400 people.

Health officials say some people picked up the virus after having only “fleeting” contact with someone later diagnosed with COVID-19.

The city is urging people to get tested, but has come under fire over the slow pace of its vaccine rollout. Only about 9 percent of people in NSW have been vaccinated, according to Berejiklian who acknowledged the concerns on Friday.

“What we are missing at the moment is the doses,” she said. “They are coming in mid to late September in terms of the large-scale supply, but until that time we have to be conscious that we will have lower rates of vaccination.”

The sudden outbreak has also created more heartache for the thousands of Australians wanting to return home but forced to wait because of limited spaces in compulsory mandatory quarantine. The number of places available has been halved.

Cambodia has all but escaped COVID-19 last year, but it has been unable to tame an outbreak that began in late February after a failure in the country’s hotel quarantine system.

Cases and deaths have reached record highs in the past week, with 954 cases and 27 deaths reported on Thursday.

With help from China, Cambodia has made the most progress in vaccination among Southeast Asian nations, a third of people have had both doses of the vaccine, according to the World Health Organization.

Cambodia has a population of about 16 million.

Indonesia has had little respite from the virus since the pandemic first began.

Now the Delta variant is ripping through the archipelago leaving hospitals overwhelmed and patients searching desperately for oxygen supplies.

The country reported 38,391 cases on Thursday, six times the number a month earlier. The daily death toll has also surged, doubling in little more than a week.

Indonesia was one of the countries that took part in late-stage trials for China’s Sinovac vaccine and began its mass vaccination programme in February. It has so far administered 48.5 million doses but only 5.3 percent of the population is fully covered, according to Our World in Data.

Indonesia recorded more than 1,000 COVID deaths in 24 hours on Wednesday.

Al Jazeera’s @JesWashington is at a makeshift cemetery as Jakarta runs out of space to bury its dead ⬇ pic.twitter.com/C32yhFJvRj

The Tokyo Olympics was delayed by a year but it has still been outrun by the coronavirus.

On Thursday, the Japanese government announced a state of emergency in the capital that would remain in force throughout the period of the games.

“Taking into consideration the impact of the Delta strain, and in order to prevent the resurgence of infections from spreading across the country, we need to step up virus prevention measures,” Japanese Prime Minister Yoshihide Suga said.

Organisers also announced that even having a limited number of local spectators would be too risky given the spread of the virus and that no fans would be allowed into venues to watch the events.

Little more than 15 percent of the country’s population have been fully vaccinated against the virus.

A year ago, Malaysia was reporting zero locally transmitted cases.

The government even felt confident enough to publish a book detailing its pandemic response.

But cases began to rise after an election in the state of Sabah in September and have surged since January even after the declaration of an “emergency” to tackle the pandemic that led to the suspension of parliament.

A “total lockdown” was imposed from the beginning of June.

On Thursday, Malaysia reported 8,868 cases and a record 135 deaths, amid growing anger at the government. On Friday, cases soared to 9,180, the highest since the start of the pandemic.

The surge has overwhelmed many hospitals, particularly in Kuala Lumpur and the surrounding state of Selangor. On Thursday, the health ministry said it would deploy more medical resources to the areas and consider setting up field hospitals.

Critics have urged the health ministry to step up testing, noting that the positive rate stands at between 8 and 9 percent, which is above the 5 percent limit recommended by the WHO.

After a sluggish start, the country’s vaccination programme is now picking up momentum.

A record 379,909 doses were administered on Thursday.

Officials say 30.9 percent of those above 18 have received at least one dose of the vaccine, while 13.6 percent have had two.

After the military seized control of Myanmar on February 1, tens of thousands of people took to the streets in protest and the country’s COVID-19 response collapsed.

While official numbers declined in each update from the WHO in the weeks following the coup, that was mostly because there was little testing being done. Many health workers had also joined the civil disobedience movement to show their opposition to the coup.

In some parts of the country, ethnic armed groups took up the slack. The Kachin Independence Organization (KIO) told Al Jazeera in May that it had vaccinated 20,000 people in areas that it governs using Chinese vaccines.

Now the country is in its worst wave of the pandemic so far, reporting a record 4,132 new cases on Thursday, as well as 52 deaths.

The worst affected areas are Chin State, on the border with India, the central Sagaing region and Yangon, Myanmar’s biggest city and commercial capital with stay-at-home orders issued in some areas.

Cases have also seeped across the border to China, where COVID-19 first emerged in late 2019, with an outbreak discovered in the city of Ruili.

The South Korean capital and its surrounding areas are preparing for tougher restrictions after the country announced a record 1,316 daily cases on Friday.

The authorities aim to target areas where the disease is known to be spreading, so bars and nightclubs will be closed and opening hours for restaurants will be shortened with only two people allowed to dine together.

The Level 4 guidelines will be come into force in Seoul, Gyeonggi Province and Incheon, 40km (25 miles) west of the capital, on Monday.

“In Seoul alone, we are seeing over 500 cases for the third straight day, while four out of five of nationally reported cases are from the capital area,” Prime Minister Kim Boo-kyum told reporters.

Fuelled by the Delta variant, cases in South Korea have tripled in a week and officials fear the situation could get worse before it gets better.

“We have come to the conclusion bold decisions and swift execution are the only solutions,” Kim said.

About 10 percent of people are fully vaccinated.

Studies suggest a single dose of a vaccine that requires two doses is not as effective against the Delta variant as other strains of COVID-19.

“We do need to emphasise that vaccination is used in combination with other interventions – masks and distancing – for a period of time until more people are vaccinated,” Dr Jerome Kim, the director general of the International Vaccine Institute in Seoul, told Al Jazeera. “We are going to have to be strict about the messaging around the continued use of masks and distancing.”

Not too long ago, Thailand was talking about opening up its borders having largely kept the coronavirus in check.

On Friday, it said it would impose a lockdown in Bangkok from July 10 after a surge in cases, largely attributed to the Delta variant. The decision means people will only be allowed to leave their homes to buy food or go to the doctor.

Thailand reported more than 9,000 new cases on Thursday – the highest since the start of the pandemic – and 75 deaths, also a record. Authorities are now planning to turn a terminal at Bangkok’s airport into a field hospital to cater to the growing number of COVID-19 patients.

The Thai outbreak has also spilled over into neighbouring Laos, as Lao citizens who lost their jobs in Thailand return home.

Down south, meanwhile, foreign tourists have returned to the holiday island of Phuket under the quarantine-free “Sandbox” initiative for the fully vaccinated.

Ho Chi Minh City went into a 15-day strict lockdown on Friday after daily cases hit a record and authorities adopted the toughest measures possible to stamp out a fourth wave of the coronavirus that began towards the end of April.

People in the country’s biggest city will be confined largely to their homes and allowed out only in the case of “absolute necessity”. Shops, bars and restaurants will all be closed, food delivery suspended and public transport halted. News of the lockdown prompted panic-buying at supermarkets.

Vietnam has successfully contained previous outbreaks with swift testing, tracing and isolation, but the measures have not been as effective against the Delta variant.

“Many cases have been detected in the community with unclear epi links or unknown sources of infection,” the WHO noted in its weekly update for the country on July 8.