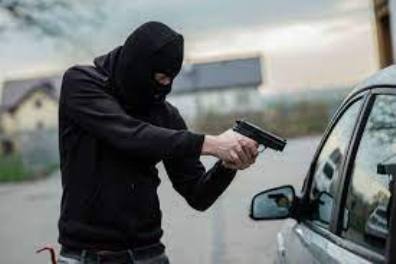 A Kenyan armed robber who allegedly stole President Uhuru Kenyatta’s car in 2014 has been sentenced to death.

Love dont’ hurt
The BMW 735 car model which was valued at US$10,200 at the time, belonged to the President’s motorcade, Kenyans.co.ke reported.

Dariro
As he passed the sentence, the Chief Magistrate of the Milimani court, Francis Andayi, said the robber, who is a mechanic, was slapped with a harsh sentence because his actions were considered a matter of national security.

The daring robber, and two other accomplices robbed Chief Inspector of Police, David Machui, at gunpoint on 26 August 2014 in Nairobi, Kenya. The three had an AK-47 rifle and another pistol at the time of committing the crime, according to the charge sheet presented to court.

The robbers then reportedly stripped Machui naked and abandoned him in a thicket.

The case attracted so much global attention and Interpol had to come in to help apprehend the robbers.

After hijacking the car, the mechanic then went to a garage in Nairobi where he stripped it of it’s tracking system before driving of to Kampala, Uganda.

It is also alleged that an informer provided the telephone contacts of the suspects, which the Kenyan police shared with Ugandan police.

Adsense SA in Article
The mechanic was lured into a trap at in Kampala near Makerere University.

Ugandan security officers obtained the contacts of the suspect’s girlfriend. Operatives pressed her to cooperate with the police and she gave in.

She then telephoned the suspect and they had a chat as detectives listened in. She was told to ask for a meeting with him which the suspect accepted.

When the suspect reached Kampala, he drove to an area called Wandegeya and met the girlfriend. It was then that detectives pounced on him.

He cooperated with the police and led them to where the car was, where the officers positively identified it as the exact match with.

“Our counterparts informed us that their President’s car that was stolen at gunpoint was heading to Uganda. So we started to monitor and we recovered it and we have sent it back to Kenya,” director of Interpol in Uganda Asan Kasingye said at the time.