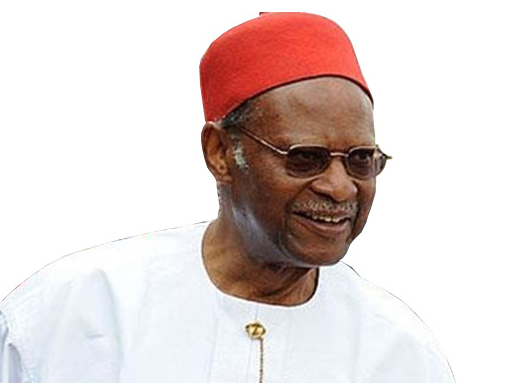 Anyaoku made the  call when the Principal Officers of the Chartered Institute of Stockbrokers (CIS) paid him a courtesy visit in Lagos.

Anyaoku who commended the board and management of the Institute for taking it to greater height,  said that governments in developed economies utilise the capital market to fund infrastructure projects.

He said that all tiers of government should take advantage of long-term investment opportunities in the market to raise long-term fund for development projects.

Anyaoku noted that there was a growing need for the Federal  Government to mobilise private capital through the market to raise long term fund for infrastructure development.

“Developed countries did not just develop on the basis of government funding alone, but participation of the private sectors.

“ Many big companies in Nigeria are performing below average because of lack of resources.

“The resources provided by the government is inadequate.

“There is the need for mobilisation of private capital to enable the companies operate optimally,” he said.

Anyaoku warned against Nigeria’s adoption of common currency in the West African region, saying it was too early and should not be rushed.

He argued that it took European countries many years to achieve common currency and the management of fiscal policies of the member countries must be studied.

Commenting on the closure of the border, the technocrat said the opportunities created by the closure would be used to protect our local industries and stimulate economic growth.

But he cautioned that border closure should not be a permanent decision.

Earlier in his opening remarks, the CIS’ President and Chairman of Council, Mr Adedapo Adekoje, said the visit was in recognition of Anyaoku’s service to the country.

Adekoje added that the visit was to seek his participation in the institute’s activities as an elder statesman.