52 injured, no fatalities after plane skids off runway in Istanbul 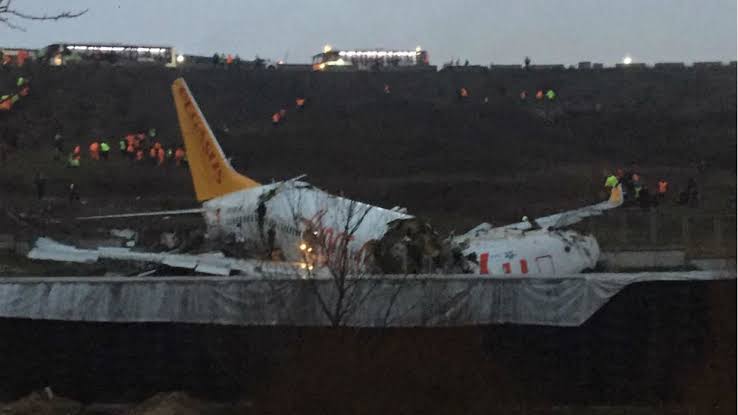 (dpa/NAN) At least 52 people were injured, but there were no fatalities, on Wednesday after a passenger plane skidded off a runway and caught fire during landing at an Istanbul airport.

Istanbul Governor, Ali Yerlikaya, said that the injured 52 people had been taken to the hospital and that evacuations were ongoing.

The tail of the plane had also split and parts of the fuselage were shattered.

Transport Minister Mehmet Turhan, said that there were 177 people on board, adding that the plane had a hard landing, but there were no deaths.

The plane was flying into Istanbul, which was hit by high winds and heavy rains, from Izmir, on Turkey’s Aegean coast.

Yerlikaya said the plane slid off the runway shortly after landing, and that the people on board include: 171 passengers and six crew.

Turhan, who said many exited the aircraft on their own, added that an engine under the wing caught fire.

However, the State News Agency Anadolu, said the fire was eventually put out.

Earlier, passengers were seen exiting onto one wing.

The accident took place at Sabiha Gokcen Airport on Istanbul’s Asian side.

State broadcaster TRT said that the airport had been closed.

And all flights had been directed to Istanbul’s main international airport.

Yerlikaya, however, said that firefighters and emergency teams were dispatched to the scene immediately. TV footage showed the plane being doused with water.

In January, all flights were suspended at Sabiha Gokcen airport after a Pegasus plane skidded off the runway due to bad weather.

The plane, which landed from Sharjah, had 164 passengers on board and all were safely evacuated.(dpa/NAN)