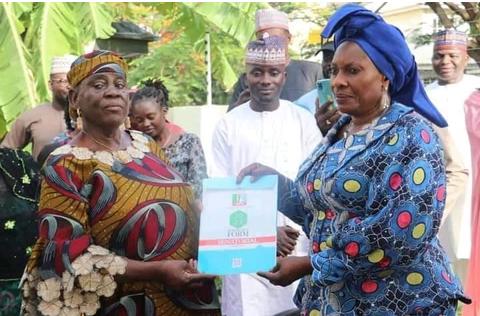 Women and Youths from Southern Jos in Plateau state have purchased the All Progressive Party (APC) Senatorial nomination form for the Minister of Women Affairs, Dame Paulin Tallen, ahead of the 2023 general elections.

Leader of the delegation Felicia Bala, while presenting the form to the Minister Saturday in Abuja, said the zone contributed to buy the form because of the antecedents of the Minister in service to humanity, especially to women and children.

”We have been having a series of meetings and noticed you were not coming out for any position and we thought that seeing all you have done and are doing, we want you to go further and that is why women and youths of plateau south bought form for the senatorial seat.

”We did this without your position but we want you to continue and that is why we went behind your back. All we ask is that you fill the form and return it to us for onward submission. Our only prayers are for you to succeed in the primaries we will carry on and ensure you get the position,” the delegation assured the Minister.

Earlier, the Gender Director NANS Plateau state, Gift Daniel, lauded the Minister’s commitment to the rights of women and girls in the country, describing her as a caring mother whom they all want to see continue leading them.

Also the Youth Leader Langtang North, Comrade Nanzing Namla, assured the Minister of the youth support in carrying on with her service to the people, he appealed to her to accept the form and represent the southern plateau zone at the Senate because she is a worthy leader.

Receiving the nomination form, the Minister noted the importance of women inclusion in governance and all other leadership positions, stressing that the issues affecting women cannot be addressed without having women themselves at the decision making tables.

She further condemned all forms of hooliganism during elections, saying that women will not accept for their children to be used as thugs to cause mayhem and attack leaders.

”What you have done surprised me, I had no plans for this and I am  calling for prayers to serve our senatorial zone. We have been advocating for more women but for anything to tamper with the few there won’t be accepted. I know the cries of women cannot go in vain, it is a call to action and with God being with us we will succeed because the only hope now is women and youth and we can use the numerical strength in our favour.

”Women have suffered enough and are still suffering yet we have no voice because the number of women at the national assembly is a drop in the ocean. We succeeded in having one voice there. Unfortunately there have been terrible threats to her life and that has made her withdraw but my prayer is that we get that seat for our senatorial district. Any man who wants to displace a woman should know it is unacceptable,” she stressed.