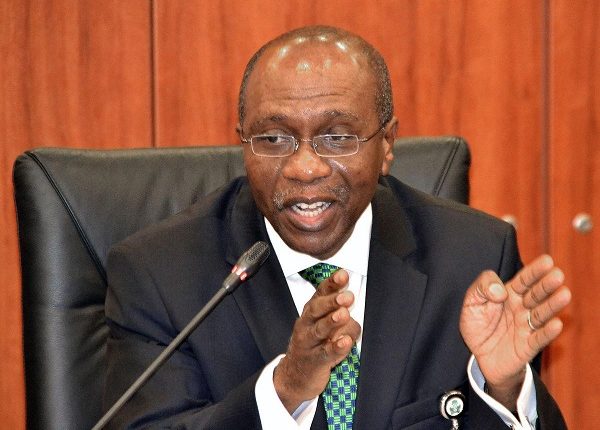 The CBN governor, Mr. Godwin Emefiele has submitted his presidential nomination form to the secretariat of the rulling party, APC Wednesday in Abuja.

His submission of the APC presidential form which was followed the Court of Appeal sitting in Abuja which upheld the judgment of the Federal High Court Umuahia that nullified Section 84(12) of the Electoral Act which required public office holders seeking elective office to resign before Primaries or they cannot participate.

The Appeal Court upheld the judgment of Justice Evelyn Anyadike that Sections 66(1)(f), 107(1)(f), 137(1)(f) and 182(1)(f) of the 1999 Constitution already stipulated that appointees of government seeking to contest elections were only to resign at least 30 days to the date of the election and that any other law that mandated such appointees to resign or leave office at any time before that was unconstitutional, invalid, illegal null and void to the extent of its inconsistency to the clear provisions of the Constitution.

By this judgment, the CBN Governor Mr. Godwin Emefiele, The Attorney General of the Federation Abubakar Malami, Mr. Emeka Nwajiuba, Rotimi Amaechi and all other appointees off Government can now remain in officer until 30 days to the election.

When the news broke at the APC National Secretariat, it was jubilation all through as the staff of the secretariat saw it as victory for the Party.

Members who daily throng the Secretariat since the party began to sell Nomination Forms were also seen dancing and celebrating the news. Jubilations were also reported at the Federal Ministry of Justice, CBN Headquarters, Transportation Ministry,y Ministry of Education and many others Government offices.

Obed Agu who represented the Lawyers who spoke to newsmen hailed the judgment and said the law has no emotions and that what the Court of Appeal simply did was to interpret the law as made by the legislature and if the legislature was not comfortable with it, they should amend the constitution and not attempt to violate the constitution by using an amendment to the Electoral Act.

Civil Society Groups like the African Centre for Justice and Human Rights represented by Banny Ejimba  in its reaction described the judgment as a victory for rule of law and encouraged politicians to play by the books. In his own reaction, the Convener of the Ethnic Youth Leaders Council of Nigeria hailed the justices of the Court of Appeal for their boldness in stating the law as it is.

He also urged public office holders who are to remain in office to by this judgment to still dedicate their time to the service of the people while seeking elective office.

Emefiele submission has  effectively put him in the ring for the epic battle of who becomes the Presidential candidate of the ruling party.

Emefiele who has been rated as one of the favourites to clinch the ticket said he was sure the delegates of the party will vote for the continuation, consolidation and expansion of the legacies of President Muhammadu Buhari and that is what his candidature offers the Party and Nigerians.